Built in 2011, the Arena Nationala has turned into a legendary battlefield hosting Romania national football team. The stadium depicts the team’s glorious history and is home of over 55,000 of its dedicated supporters.
Contents: 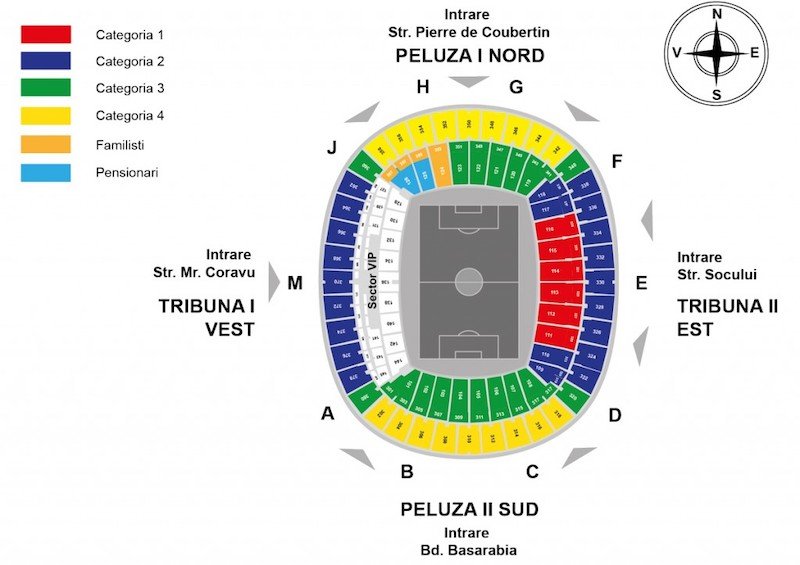 The ultra-modern sports complex including the home ground of the Romanian national football team was constructed to replace Lia Manoliu in Bucharest. The old venue stood there from 1953 till 2008. Despite controversial issues with the roof and several delays, the new magnificent arena was finished in 2011 and became an important centre-piece of Bucharest’s leisure, culture and architecture.

The bowl-shaped ground in Bucharest has a classic layout and consists of Tribuna I Vest at the west, Tribuna II Est at the east, Peluza I Nord at the north, and Peluza II Sud at the south. It has the following categories of seats:

The stadium has been infrequently used as the home ground of Dinamo Bucuresti and FC Steaua for European games and big games in the national league and cup. Since the ground’s opening in 2011, the Romanian Supercup and the Romanian Cup Final has been also played there. Some big international concerts, music tours, and locally important social events and celebrations also take place at that venue. The examples are the concerts of Red Hot Chili Peppers, Depeche Mode, Ed Sheeran, and Metallica which were held there.

And of course, quite many important international football fixtures took place at the Arena Nationala. The national teams of the Netherlands, Argentina, Uruguay, Belgium, and France played against Romania at Bucharest’s wonderful stadium. In 2012, it successfully hosted the Europa League final.

The majority of the Romanian national team’s home games are played against rivals such as Montenegro, Norway, Malta, Lithuania, etc. Those matches usually don’t gather big crowds. But when the teams like France or the Netherlands arrive at the Romanian capital, it’s super hard to buy tickets, especially while you are not in Bucharest. Ticket Compare is a perfect timesaving solution which can be super helpful when you need to buy tickets online at a reasonable price. You can even buy rare tickets for the most anticipated matches there. I really enjoy their handy interface, advanced navigation, and efficient worldwide delivery.

However, if you want to buy the tickets offline, you can do it in the office located near the stadium. At the moment, there is no way to buy tickets at the stadium’s website.

The importance of the games played at the National Arena Bucuresti essentially vary. Therefore the ticket prices are never the same. For the majority of the fixtures, the price ranges between 15 RON and 100 RON (3$…17$). However, the big games against the European super teams such as France, yearly acts such as the Romanian Supercup and certainly the exclusive events such as the 2020 European Championships fixtures can be much pricier.

There are many reasons to visit the capital of Romania. Booking.com can be your best assistant which will help to plan your stay in Bucharest in the most awesome way. This hotel aggregator cooperates with thousands of accommodation owners in Romania. It means you can get some amazing deals in the most efficient and user-friendly way. You can also check out the list of the city’s best hotels provided below.

Whatever you expect from the trip to the Romanian capital, you can rest assured there is no problem getting from the centre and its major attractions to the National Arena Bucuresti and vice versa. The tips below should help you to find your way in the city.

By Bus – there is a bus and tram stop called Arena Nationala located just across the road from the stadium. The bus N109 stops there. The other bus lines which stop nearby are 86, 101, 104, 335 and so on.

By Tram – the tram stop Arena Nationala is the place where you can take off after a ride on the tram line 40 or 56. These lines conveniently link the Old Town and the national stadium. The other tram lines which can deliver you very close to the venue are 14, 36, 46, and 55.

By Metro – Piata Muncii is the nearest metro station to the sports complex in Bucharest. It will take you about 20 minutes to walk from there to the ground. Alternatively, you can cover this distance faster if you catch the tram 40 or 56.

By Car – please search for 37 Basarabia Blvd., Sector 2, Bucharest, Romania in your sat nav or mobile phone in order to get latest traffic information and the most efficient directions on how to get to the Arena Nationala. You can expect intensive road traffic on matchdays.

By Plane – Airport Baneasa is situated 12 miles north-west off the home stadium of the Romanian football team. The car ride can take about half an hour, while if you use public transport it will take you about an hour to get there.

It’s great to know that the stadium in Bucharest has 2,100 car parks. The bad news is that they are almost never available for away visitors. However, there is always a solution. Good news is that the Romanian capital offers free spaces near numerous shopping centres and offices and plenty of cheap parking spaces in all parts of the city. The approximate matchday paid parking price near the sports venue in Bucharest is 12 RON (3$).

Romania’s capital is a vibrant cultural scene and the local food is one of its attractions. Among some great things to try during your stay are sarmale (stuffed cabbage) with mamaliga (corn flour porridge), mititei (a skinless sausage), and so on. Also, try clarite for a dessert. It’s a local pancake which can be stuffed with something like Nutella or cheese and raisins, but I recommend you to try it with the seasonal berries or organic marmalade. Eating out is very affordable in Bucharest. So even if you are on a budget, you’ll find plenty of places to enjoy the local cuisine.

At this moment the venue doesn’t offer any stadium tours and has no museums and fan stores. However, if you need to pass the time before the kick-off, there is a huge hypermarket and Mega Mall with dozens of popular boutiques and shops located to the north off the arena. Among the other things, the sports complex itself also includes the tennis club, Bucharest Sport Club, swimming pools, gym and more related services.

Although you won’t find any official fan stores at the Arena Nationala, some temporary kiosks always pop-up near the stadium on matchdays. Also, you can try walking around the Bucharest’s malls in search of the official retailers.

Things to do in Bucharest

While everyone knows about magical Transylvania, which is situated within 4-hour drive from Romania’s capital, not many first comers know about the attractions they should be looking for in Bucharest. In fact, there are so many things to enjoy there! Charming streets with old facades of the historical buildings, impressive monuments, exciting nightlife, crowded theatres and ballets, and family-friendly adventure parks, are just a few things to mention.

Bucharest has got some thrilling double-decker bus and walking tours which can explain to you a lot of unusual things about the country’s history and modern lifestyle. You’ll definitely love to hear the Old Town legends, see the stunning building of the Parliament and unique churches, learn about the Romanian Communist years, and see some of the relics of this era in the city. Pub crawl tour is a great way to spend a night in Bucharest, visit the best pubs and meet some new buddies.

The Old Town (Lipscani) – can be explored on your own or with an audio guide. You can certainly find a local guide as well. Lipscani was well-preserved after WWII, unlike most of the other parts of Bucharest. Nearly every Old Town’s building can tell you a wonderful story. Thus, this stylish walking area won’t leave you indifferent.

Dimitrie Gusti National Village Museum – is a huge and impressive outdoor museum featuring the collection of nearly 280 authentic buildings. Each of them has its own story, style, and even origins. The village museum can be found in the lovely Herastrau Park which is a nice place to visit in fair weather anyway.

Transylvania – you need to reserve a full day for the trip to this enigmatic historical area and you’ll never forget this kind of experience. Rent a car, take a train, or book the guided tour with a transfer in one of the local tourist agencies. Prepare to see stunning castles, hear tons of incredible legends, and hike in the marvellous Carpathians if you have some extra days.