Built in 2015, Baku Olympic Stadium has turned into a legendary battlefield hosting Azerbaijan national football team and Qarabağ FK during the European competitions. The ground depicts teams’ glorious histories and is home of 68,700 of their dedicated supporters.
Contents: 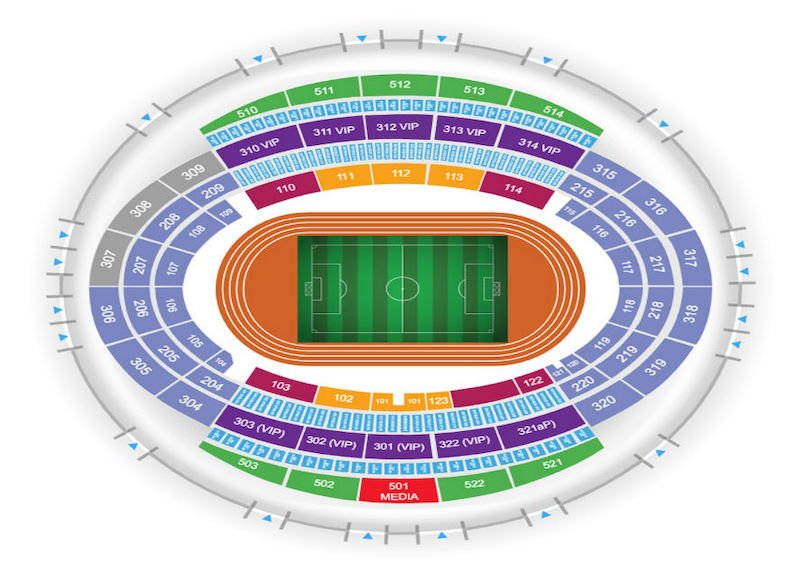 This marvellous stadium is located in the capital of Azerbaijan. The country’s largest multi-purpose sports venue is often compared with famous Allianz Arena in Munich because of spectacular ETFE cushions that light up making the stadium’s exterior simply fantastic at night. The major drawback of this bowl-shaped arena is that it has a running track around the field. It certainly worsens the view of the pitch and some fans even bring binoculars to watch the game.

Baku Olympic Stadium’s construction lasted from 2011 until 2015. It was built to celebrate the 100th anniversary of Azerbaijani football and to host the first European Games in June of 2015. The project was meant to play an important role in the country’s popularization on the world travel map and therefore it was funded by the Azerbaijani government.

Baku National Stadium has three tiers throughout its length, except for the small fourth tier located above the halfway line. The categories of seats include:

Despite the stadium’s remoteness from the major European cities, quite a few important football fixtures recently took place there. Of course, the most notable matches were 2019 UEFA Europa League Final and the UEFA Champions League home matches of Qarabag, especially in 2017 when the club played at the Champions League group stage. The stadium hosted super-anticipated matches against Roma, Atletico Madrid, and Chelsea. Also, important social events and the international athletics competitions such as the 2015 European Games gathered many spectators at Baku’s most brilliant sports venue.

Buying tickets to various events taking place at Baku Olympic Stadium has never been simpler than it is now. You can go to Ticket Compare and purchase those tickets in minutes, even if you still cannot find Azerbaijan on the map. This timesaving resource provides very handy instruments to navigate, sort, and book tickets for the important football matches and other events. You can always get them delivered to your country. In most cases, they sell tickets at a reasonable price.

Of course, there are alternative ways to get Baku Olympic Stadium tickets:

The prices largely depend on the status of the competition and the teams at field. It’s also usual for prices to be revealed late on but in most cases, they are affordable for an average European football fan.

The Azeri capital and the whole Caucasus region, in general, are still underrated among tourists. This often means that you can get more for your money. The hospitality of the local people is sincere and extremely heart-warming. Therefore, I definitely recommend you to go visit Baku and enjoy both the city and its outstanding football ground. But before you go there, you should visit Booking.com and choose one of the hundreds of hotels available in the capital of Azerbaijan. Some tips below will help you to start the search. Just keep in mind that the venue is located about 10 miles north-east of the Old City of Baku. But some of the city’s best hotels are situated within acceptable driving distance from the stadium.

Baku’s fantastic stadium is not centric. Quite the opposite, it is situated halfway from the airport to the Old City. Although the distance from the ground both to the airport and the central streets and attractions is about 10 miles, the city offers enough convenient options to reach the venue.

By Metro – is probably the most favourable way of transportation in Baku, especially for those heading to the National Stadium. The metro’s red line connects the Old City and the sports ground. Koroglu station is literally a few steps away from the venue.

By Bus – the bus lines 1, 7B, 15, 38, 62, 93, 184 and a number of others connect different parts of Baku with the Olympic stadium. The venue can be easily spotted on the map since it sits by Lake Boyukshor, translating as ‘Big Salty Waters’.

By Car – use sat nav to reach the stadium in the most efficient way. Traffic jams are possible on important matchdays. The address of the ground is Heydar Aliyev, 323, Baku, Azerbaijan.

By Train – Baku Central Railway Station is located about 7 miles south-west off Baku Olympic Stadium, not far from the green/red metro station called “28 May”. The Azeri capital is connected via train routes with the nearby countries including Georgia and Armenia. If you cannot find an affordable airline ticket to Baku, you can always fly to Tbilisi or Yerevan and take a train to Baku from there.

By Plane – Heydar Aliyev International Airport is quite small but modern and convenient. The bus line H1 can bring you from your terminal to the ground in less than 40 minutes.

The venue boasts with 3,100 modern parking spaces but unfortunately, they are mostly used by VIP guests and priority ticket holders. However, there is always a solution. The approximate matchday paid parking price near the sports venue in Baku is 6 AZN ($3.5).

Azeri cuisine can surprise you with saffron-flavoured rice known as plov or pilaf, an abundance of fresh herbs and veggies, unique fruity sauces, and certainly kebab. Halva and pakhlava are incredibly rich desserts which are known throughout Eastern Europe, the Middle East, and the Caucasus region in particular. While some of the dishes have Iranian and Turkish roots, in Azerbaijan, there are many secret recipes and these desserts can often taste different from what you might expect. Azeri black tea is an extremely popular drink in the country and it tastes great with the local sweet pastry. Below you’ll find some more information on where exactly to try those tasty treats during your stay in Baku.

Azerbaijan’s largest sports venue is really worth visiting it. No wonder it hosted some big games in the recent past because its facilities are truly impressive. If you’d like to have football experience in a moderately exotic country with lots of special and pleasant surprises at every turn, think no more. Baku Olympic Stadium will gladly welcome you and will reveal its most exciting secrets.

While I know many fans of stadium tours in several countries, pretty much none of them has been behind the scenes of Baku Olympic Stadium. The largest ground in the Caucasus region is a truly notable sports venue. It offers some great fan tours, VIP tours, as well as school tours. You can even enjoy their virtual tour online. The most common fan tours are available in English, take 1 hour and are run Monday through Friday, except for the matchdays. You’ll find more info at the stadium’s official site.

The official fan store of the Azerbaijan national football team is located near Marine Passenger Terminal of Baku. It’s very close to the Old City. It’s called GoSport and you can find it on the third floor of Port Baku Mall, 7 miles south-west off the stadium. In fact, there is no fan shop directly at the ground. Speaking about Qarabag’s fans, their best option is to enjoy shopping online at the club’s official website.

Things to do in Baku

Many western travellers have low expectations going in Baku. However, this city has everything to catch you by surprise. Azerbaijan is a small country with interesting geography. It’s lying at the crossroads of Europe, the Middle East, and Asia. Thus, you can find influences from dozens of nearby nations in its architecture, culture, religion, and certainly, cuisine. Unique historical landscapes and towers are mixed with the ultramodern architectural masterpieces. It’s also a safe and cheap place for the European tourist. So there are really no reasons to avoid this thrilling travel destination.

The city of Baku is the place where many cultures and epochs meet. That’s why it’s simply impossible to get bored during the stay in the capital of Azerbaijan. The modern futuristic buildings such as stunning Heydar Aliyev Center Museum and the Flame Towers will remind you of some modern European cities, Kuala Lumpur, and Dubai. The ancient streets of the Old City will immediately transfer you to the medieval Middle East. No matter what you are interested in, you’ll find plenty of marvellous sights, venues, and objects to explore.

The Old City – is the only thing you really cannot miss during your stay in Baku. This magnificent area features cobblestone streets with narrow alleys and one-of-a-kind architecture. You’ll fall in love with this atmospheric place and will also enjoy the beauty of the local shops and cosy welcoming cafes.

The Formula 1 Tracks – people who love football often adore the other sports too. If you are passionate about cars and racing, don’t miss the opportunity to explore the rack tracks of Formula 1. Fun tours are available and they are entertaining for both genders and all ages.

The Flame Towers – are three epic buildings representing the country’s rich industry of gas. Enjoy the amazing views of these three brother-towers from the nearby mount. Then take the cable car and go all the way down to the object’s entrance. Then go to the towers’ observatory deck which is also a must-do thing in Baku.