Built in 1892, Celtic Park stadium has turned into a legendary battlefield hosting Celtic F.C. The ground depicts the club’s glorious history and is home of 60,832 of its dedicated supporters.
Contents: 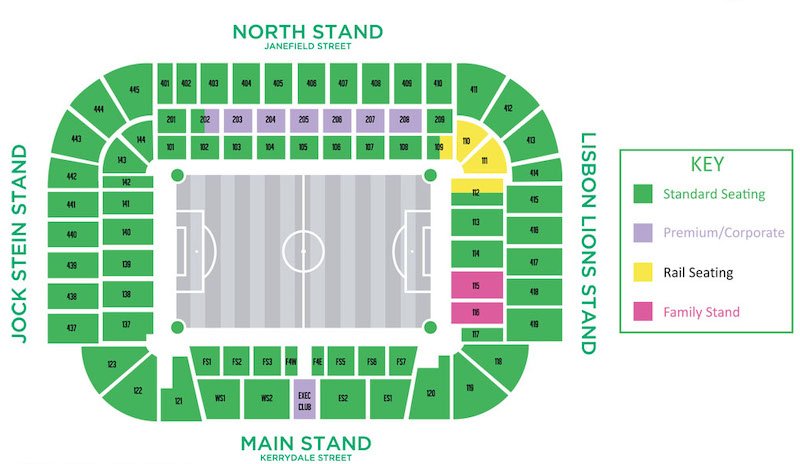 Celtic Park was built in 1892 to replace Celtic’s old ground. Surprisingly, both stadia were named exactly identically. The club was forced to construct the new arena due to a rent dispute. However, they decided to keep the name of their old ground. Today it’s also known by the nicknames Paradise and Parkhead.

Initially, Celtic’s new ground was oval-shaped. It had a cycling track, a pavilion, and one wooden stand along Janefield Street (the North Stand). In 1898, the opposite stand had been constructed becoming the world’s first two-tier stand and increasing arena’s capacity to incredible 50,000. At the beginning of the 20th century, the stadium suffered from big fires several times. However, reconstructions were making it more modern after each disaster.

Currently, Celtic Park looks unbalanced due to that the South stand had not been renovated for a long time. The stadium has the following stands: the original Main Stand (Kerrydale Street) which is now the stadium’s smallest section, the North Stand (Janefield Street) accommodating 27,000 supporters, the West Stand (Jock Stein Stand), and the East Stand (Lisbon Lions Stand). The last two stands are almost identical and can host 13,000 fans each.

The majority of the seating at Parkhead have the same price, no matter where they are located. The seating categories are the next:

In the 1960s and 70s, Celtic FC was a dangerous rival for nearly every team at the European football tournaments. Therefore, a number of great battles had been played at Paradise in the playoffs of the European Cup. Today, Celtic Park is the largest stadium in the Scottish Premier League and the sixth largest one in the UK.

If you are looking for the least confusing and the most efficient way to buy tickets for the football match played at Celtic Park, I can recommend you using StubHub. Although it’s so simple as one, two, three, you may also consider the alternatives:

The ticket prices for Scottish Premier League fixtures at Celtic Park are as follows:

Fans under the age of 16 and 65+ year-old supporters can buy regular tickets for 20-24$. Fans under age of 13 should pay about 13$. Season ticket holders get additional discounts.

In general, the tickets are cheaper for the matches of the Scottish local tournaments and are more expensive for the European cup fixtures.

If your next travel destination is Glasgow, prepare to have an amazing adventure. This stunning city is often called the world’s friendliest city and you’ll soon find out why. But first, visit Booking.com to reserve some of the best accommodations. Glasgow is a popular year-round tourist gem so reserving your hotel room in advance is an important part of your travel arrangements. Keep in mind that it’s better to search for a hotel located in the city centre from where you can conveniently walk to the majority of tourist attractions, shopping centres, the best nightlife venues, pubs, and restaurants.

Parkhead is not only the Celtic stadium’s nickname. The club’s fans often call the area near the ground in the same way. Getting to Parkhead from the city centre is pretty easy. If you want to walk, it may take you 30 to 40 minutes but fortunately, there are a number of other ways to accomplish this mission on the matchday.

By Train – Dalmarnock and Bridgeton are the closest train stations to the main football ground of Glasgow. A five-minute train ride can easily get you from Glasgow Central Station to Dalmarnock or Bridgeton. Thereafter, you’ll have to walk for 15 minutes before you enter the stadium.

By Bus – the bus lines 43 and 64 are the optimal ways to get to the stadium from Glasgow’s centre. The ride takes about 30 minutes if you catch it on Ingram Street and get off on London Road near the arena. In case if you arrive in the city by train and want to get from Glasgow Central Station to Celtic Park by bus, you should take the bus lines 61 or 62. The buses 240 and 255 also stop not far from the football ground if you don’t mind to have an eight-minute walk after the ride.

By Car – getting by car to the stadium is pretty straight-forward if you have any electronic device with Google Maps. Simply use the address “Celtic Park, 95 Kerrydale St, Glasgow G40 3RE, Scotland, UK” and follow the directions. The tricky thing about this option is the unavailability of the car parks near the arena. The fans are supposed to park their cars closer to the centre and use public transport or walk to the stadium.

By Taxi – probably, it’s the simplest way to get a transfer to the Celtic’s arena. The ride from the centre to Parkhead costs about 17$. Uber is also available in Glasgow.

By Plane – the distance from Glasgow Airport to Celtic Park is only 11 miles, which means that a taxi or an Uber ride shouldn’t bankrupt you. In fact, you can also rent a car at the airport. The cheapest way to get from the airport to the centre is using 500 Airport Express. Get off at Waterloo Lane, walk to the Drury Street for a couple of minutes and take the bus 240. Your final stop will be Society Street and you’ll have to walk for eight minutes from there.

Parking spaces are limited at Celtic Park. Unless you book the parking spot in advance, it will be a real challenge to find that spot when you arrive at the stadium just before the match starts. However, there is always a solution. The approximate matchday paid parking price near the sports venue in Glasgow is 11$.

Dining options in Glasgow are endless. Even if you stay in this city for a month and eat out three times a day at various eateries, I think the city will still have some hidden gems left for your next visit. The warm welcoming atmosphere of this city multiplied by diverse food is a mix that makes Glasgow unrivalled.

The history of Celtic F.C. is quite epic and the club is well-known both in Great Britain and far beyond. Their spectacular arena is a unique place of interest itself. No wonder so many football fans and random tourists from all around the world come to see it in their own eyes and experience the real spirit of the Celts.

If you want to learn as much as possible about the Celtic’s incredible ground and the club’s glorious history, you cannot miss the opportunity to take one of Parkhead’s amazing stadium tours. The informative exhibition, the tunnel, and the pitchside experiences are inspiring. Also, you can buy drinks and meals before the tour starts at Jock Stein Lounge. The regular price for the most popular tour is 17$. However, there are several other tour options available at Celtic Park. Among them are Bhreakfast Club (20$ per adult), Tour and Dine (40$ per adult), Tour and Dine Celebration (48$ per adult), and, finally, Celtic Park and Tennents Brewery Tour (29$ per adult). There are discounts available for younger and elder fans, as well as family packages, and season ticket deals. For more details please visit Celtic F.C.’s official website.

Although Celtic Park can be proud of its magnificent tours and fine dining options, the club’s museum is currently small and is only available as part of every stadium tour package. The museum room doesn’t even display every trophy Celtic F.C. had won. However, there are rumours that the club is planning to make a new museum which will display much more memorabilia in a modern way. Hopefully, they will accomplish it soon.

A wonderful online store is a must-have for every football club these days. However, Celtic also operates three official fan stores in Glasgow. They can be found in Glasgow Airport, in the city centre at 154 Argyle Street, and at Paradise itself. Use the shop finder feature at the Celtic’s official website to learn more about opening hours, gift cards, refunds policy, and more.

Things to do in Glasgow

Imagine a wonderful modern city with friendly people, world-class attractions, and an endless number of festivals and events. Glasgow is a terrific place where each traveller can find lots of inspiring things to do and experience. “Entertaining” is the second name of Glasgow. Diverse neighbourhoods, impressive architecture, vibrant nightlife, and amazing shopping are among the other things you might enjoy in that city.

Tours can help you to discover various aspects of Glasgow and learn amazing facts from local enthusiasts. A big number of walking tours are themed around many particular things such as music festivals and events, cuisine and history. Guided tours are available at places like breweries, Mackintosh properties, City Chambers, railway, and even city murals. Another option is to explore it on your own step by step. Glasgow’s hop on hop off bus operates throughout the year and the daily tour can be as cheap as 20$ per person.

Kelvingrove Art Gallery and Museum – an incredible collection consisting of over 8,000 significant art objects can be enjoyed by anyone completely free of charge. The collection is split into a number of categories. Therefore, you can actually choose your favourite topics such as stuffed animals or Salvador Dali masterpieces.

Glasgow Botanic Gardens – is a venue that boasts with spectacular glass architecture and a number of exotic plants. It’s certainly a one-of-a-kind venue in Scotland. It’s a perfect oasis to visit for relaxation and in search of inspiration.

Glengoyne Distillery – is almost a 190-year-old prospering distillery which offers unique guided tours, including private tours, and legendary scotch tastings. If your friend has a special occasion while you are in Glasgow, that’s a wonderful place to visit before partying in one of Glasgow’s nightclubs.