Built in 2003, Estadio da Luz has turned into a legendary battlefield hosting S.L. Benfica. The stadium depicts the club’s glorious history and is home of 64,642 of its dedicated supporters.
Contents: 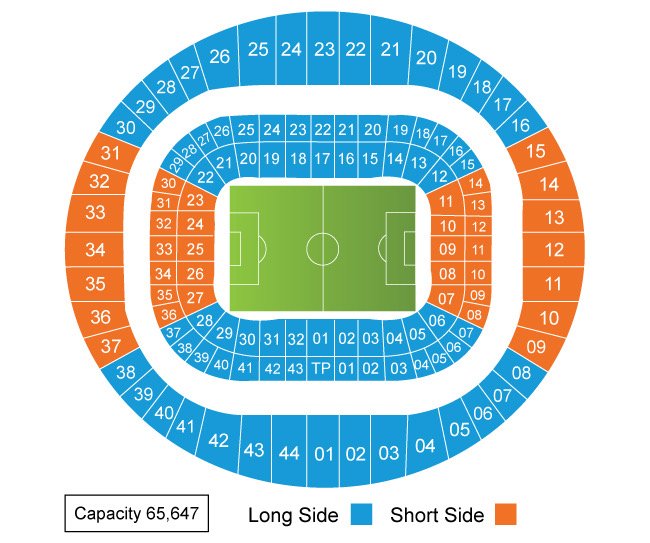 The most marvellous sports ground in the capital of Portugal is Estadio da Luz. It is the home arena of S.L. Benfica, the local super club with most Portuguese football Championships won. The venue also hosts numerous concerts, festivals, theatre performances, public holiday celebrations, and an endless list of the other events.

The original Estadio da Luz which stood there from 1954 and until its demolition in 2002 had a mind-bending capacity of 120,000 in its golden years. When the Portuguese Football Federation qualified for hosting the UEFA Euro 2004, Benfica was in a crisis. The club’s directors considered all options, including the possibility to withdraw Estadio da Luz from the list of the competition’s official venues. Finally, a difficult decision to replace the old stadium has been taken in 2001. The first referee’s whistle sounded at Nova Catedral on 25 October 2003. On 4 July 2004, the brilliant new stadium of SL Benfica hosted the UEFA Euro 2004 Final. Unfortunately for the local fans, Portugal lost the final game to Greece, 0–1.

The Bancada Nascente and Bancada Poente are the longside stands of the ground. The Bancada North and Bancada Sul are located behind the goals. Each of them, including the rounded corner zones, has three tiers. The stadium’s opposite sides are almost identical and its transparent roof reliably protects all seats from the rains.

The categories of seats include:

The biggest stadium in Portugal hosted a number of ultra-important events including the Quarter-Finals and the above-mentioned Final of the Euro 2004, dozens of the Portugal national football team friendly and official matches, and the 2014 UEFA Champions League Final.

Lisbon is passionate about football and only a handful of clubs in the world can boast with the average attendance of over 53,000. Therefore, tickets are often scarce at Estadio da Luz. Ticket Compare can help you to purchase even the rarest tickets at a reasonable price. It’s a quick and convenient service with an intuitive interface and worldwide tickets delivery.

More places where you can buy tickets for the matches played at Estadio da Luz include:

If you want to reserve the seat at one of the main stands, prepare to pay from £19 to about £45 for the regular game. The price varies for the fans who want to sit at the lower level or floor 3 near the corners and for those who occupy the centric zone at floor 1. The seats behind the goals cost from £17 for the lower level seats to £31 for the floor 1 seats. The tickets for the European competitions and derby matches naturally cost more than the tickets for the random local games.

For some people choosing a hotel in a new city can be a real headache. My tips below intend to help you to get a sense of Lisbon’s layout. Hopefully, it will also help you to reserve the most suitable accommodations. Booking.com can become your best assistant in this task. You may prefer to be based closer to Estadio da Luz, however, keep in mind that the ground is situated 7-9 miles south-west of Lisbon’s centre. Príncipe Real is one of the city’s best areas which is situated closer to the stadium of SL Benfica compared to the other popular areas of the Portuguese capital.

Lisbon’s public transportation system works well and includes a number of buses, including night buses, trams, funiculars, and metro. The transport in the city is very affordable and a one-way ride can cost as cheap as £1,2 if you use the 7 Colinas Card. It is a rechargeable magnetic travel card which only costs £0.4 and can be used for 1 year. A 5 or 7-mile taxi ride from the city’s airport to the centre costs less than £8.

By Metro – choose the blue metro line to transfer yourself from the centric areas like Baixa-Chiado, Restauradores or Avenida station to Estadio da Luz. The name of the station where you should take off is Colégio Militar/Luz. It’s a 10-minute walk from the ground at most.

By Train – Lisboa – Rossio is the name of the city’s main train station. It is also known as Estação Central. The large transport hub is situated there. It’s convenient to use the blue line of the metro to get from the central train station to the Nova Catedral.

By Car – the address will help you to reach Benfica’s stadium on a matchday if you search for it in sat nav. Here we go, Avenida General Norton de Matos, 1500-313 Lisbon, Portugal.

By Plane – Aeroporto de Lisboa (LIS) is located only 4 miles north-east of Estadio da Luz. However, these two locations are not directly linked by public transport. Therefore, the best option is to take a taxi or use Uber, unless you want to spend almost an hour in public transport and have a transfer midway.

Car parks at Estadio da Luz are unable to satisfy demand. However, there is always a solution. The approximate matchday paid parking price near the sports venue in Lisbon is £8.

Lisbon is the place where you should definitely go if you are the real fan of fresh seafood. It’s also a bargain city compared to the major European travel destinations so you’ll be pleased with the prices at the restaurants as well. The must-try meals in Lisbon are the whole crab, sardines, bacalhau (dried salted codfish), arroz de marisco (rice with seafood and veggies), and certainly the best Portuguese dessert – pasteis de nata with vanilla custard.

Lisbon’s greatest stadium hosted a number of important football matches, non-sporting events, and concerts. Thus, millions of people enjoyed attending that place. If you want to feel the unique energy of the main venue of the Euro 2004, enter the VIP areas, experience the best of VR in Benfica Museum, and walk along the players’ tunnel, Estadio da Luz is ready to please you.

If you want to explore the world-class facilities of the arena in Lisbon on non-eventdays, I recommend you to book a combined stadium and museum tour for £15. They might also significantly discount the price if you buy the tickets online. This tour is the nicest way to explore the various aspects of the stadium’s unique history, architecture, and memorabilia. If you just want to experience the stadium tour without entering the club’s museum, you’ll have to pay £11.

If you’ve already been to Estadio da Luz for a number of times and don’t really feel like taking a tour, the museum can be visited separately. It is open from 10 am to 6 pm every day except for European matchdays and public holidays. The self-guided tour lasts up to 1 hour 30 minutes and the ticket costs £8 unless you are lucky to buy it on sale here.

Shopping at SL Benfica’s official website is easy and convenient. The online fan shop offers a wide selection of unique official products such as autographed jerseys, personalized items, retro collections, seasonal clothing, and much more. During your stay in Lisbon, you may certainly decide to shop at MediaMarkt. That’s Benfica’s main offline store which can be easily found at the east stand of the club’s stadium.

Things to do in Lisbon

Lisbon is a wonderful European city with rich colonial history and head-spinning architecture, very special geography and food habits, contemporary museums, cosy parks and gardens, and trendy shops. Chiado, Principe Real, and Baixa are among the most centric areas of the city which should be explored first of all. Bairro Alto is another place where you should go when you are looking for nightlife and pure fun. Finally, you should wander in the area of Alfama. It offers some of the most spectacular ocean views and incredibly lovely narrow streets.

The Portuguese capital can be explored in many different ways and Lisbon tourist bus or the Yellow bus is a good starter. You’ll see the city’s major attractions in no time if you take one of three Lisbon’s official sightseeing tours. Lisbon Panoramic Tour, Tagus Riverbank Tour, and Belém Tour are available with the English audio guide and cost from £8 to £15. Some great half-day and full-day tours to mention are Aveiro, “the Venice of Portugal”, Arrábida & Sesimbra wine tour and a number of stunning Lisboat tours.

25th April Bridge & King Christ – one of the most spectacular bridges in Europe features the statue of Christ the King. You’ll enjoy stunning views over the Tagus River and see Lisbon on full display.

Torre de Belém – is the architectural masterpiece which has been glorifying the Portuguese capital since the 16th century. This oceanfront tower is probably the most iconic landmark of the city and you should get in touch with the history of Lisbon and visit this place.

Aveiro & Costa Nova – if you have at least half of the day, you should go to “the Venice of Portugal”. You’ll certainly have fun while sailing along the narrow canals in Aveiro. Later on, you’ll fall in love with Costa Nova’s vivid traditional houses located at the beach and explore the unique city of Aveiro on a free bicycle.