Built in 2005, the Liberty Stadium has turned into a legendary battlefield hosting Swansea City FC and the Ospreys rugby team. The ground depicts teams’ glorious histories and is home of 21,088 of their dedicated supporters.
Contents: 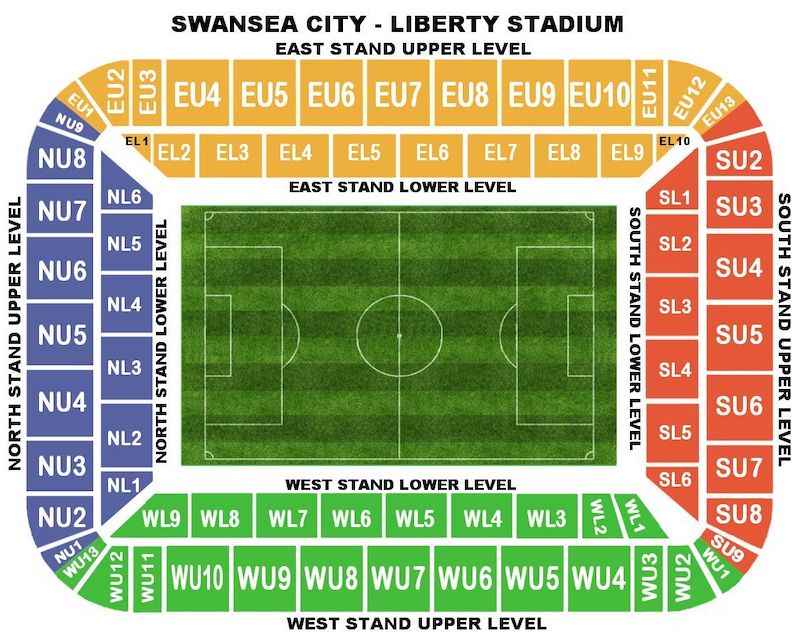 Opened in 2005, the stadium in Swansea became the third largest football ground in Wales. Only Principality Stadium and Cardiff City Stadium boast with higher capacity in this country. The club has left the Vetch Field which had been their home for 93 years and started writing new history.

The Liberty Stadium is completely enclosed. It’s quite conservative in its design but it still looks great and it has a wonderful atmosphere. All four stands are two-tiered but the West Stand is slightly taller than all others. It is due to the row of corporate hospitality boxes. The East Stand is likely to get the third tier in the nearest future which should increase the Liberty Stadium’s capacity by 6,000 seats. In fact, it’s still unknown when exactly it’s going to happen.

The categories of seats are as follows:

During the international competitions the Liberty Stadium is called Swansea Stadium. By the way, it hosted seven Wales international football fixtures including five friendly matches, UEFA Euro 2012 qualifier, and the most recent 2014 FIFA World Cup qualifier against Croatia, which was lost by the home team 1–2. Quite a few music concerts and political conferences also took place at the venue.

If you want to buy tickets for the Liberty Stadium’s concerts and matches of Swansea City FC, the Ospreys rugby team, or Wales international football team, among the other great websites I can recommend StubHub. It saves a lot of time and even when the tickets are sold out everywhere else they are still available at StubHub. Other traditional ways to purchase football, rugby, and concert tickets include:

The regular ticket prices at the Liberty Stadium are as follows:

Apart from football battles, Swansea is known for its university, fresh market, lovely Gower Peninsula, Swansea Bay, amazing parks, and parties. No matter what kind of activities you prefer, there are many things to enjoy in Swansea. Booking.com will help you to solve all issues with accommodations quickly and efficiently. Below I’ll show you a few examples of some great hotels in this lovely city.

The venue has a very convenient location and the city is quite compact anyway. Its population is about 170 thousand. The public transport works great and there are more than enough taxis in Swansea. Therefore, you shouldn’t have any troubles getting to the stadium, especially since you have all these directions below.

By Train – if you are arriving in Swansea by train, you have to know that Swansea Railway Station is around a 30-minute walk away from the Liberty Stadium in the north direction. If you prefer using a local bus, the following routes will be helpful: 501, 30, and 34.

By Bus/Metro – there are many bus routes connecting different places in Swansea with the Liberty Stadium. The 4/4A FTR Metro buses stop can be found across the road from the venue. Therefore, the most efficient way is to find the bus stopping there. You can’t get any closer to the stadium using public transport in Swansea.

By Car – arriving from another city by car means that you should leave the M4 at Junction 45. Then take the A4067 towards Swansea before you see signs towards the Liberty Stadium.

By Plane – the closest airport to Swansea is Cardiff Airport (CWL). While the distance from there to the ground is 40 miles, the car ride may take from 1 hour to 1:40 hours. If you choose Transport for Wales option, it will take you about 2 hours to get to High Street Station. From there you can take bus 34 and quickly find yourself at the stadium.

Car parking at the ground is for permit holders only. The nearby street areas also don’t have any parking for non-residents. However, there is always a solution. The approximate matchday paid parking price near the sports venue in Swansea is 17-21$.

Wales is known for organic farmer’s markets, special cheese, ancient culinary traditions which can be experienced during food festivals among the other things. Try Welsh cakes, cawl, and Welsh rarebit while you are in Swansea. The city has lots of amazing spots for foodies and quite a few great traditional pubs.

Since the venue in Swansea is still quite new it boasts with wonderful hospitality suites, such as the CU29 Suite for 14 persons, the Morfa Lounge, and amazing VIP area. You are likely to enjoy seeing some great things such as the players’ tunnel and TV studio if you take a stadium tour.

The least convenient thing about this tour is that you cannot take it unless you have seven friends who also want to join you and explore this awesome ground in Swansea. If your group is big enough, you can call 01792 616400 and select Reception option or send an inquiry to tours@liberty-stadium.com. The tour provides an excellent opportunity to follow in the footsteps of some of the local football and rugby idols and to look at the Liberty Stadium from the new angle.

If you are the real Swans’ fan, you really should check out the Club Shop at the Liberty Stadium (West Stand). The second location can be found by address 33-34 Union St, Swansea SA1 3DZ in the city centre. Finally, you can go to online Swansea store and choose from thousands of amazing items. They are also shipping merchandise to many countries around the world.

Things to do in Swansea

The second largest city in Wales is often considered one of the best cities in the UK. The old streets, striking architectural landmarks, lots of green zones, vivid Swansea Market, and incredible nature of the Gower Peninsula and the nearby beaches are the things that won’t leave you indifferent.

Currently, it seems there are no regular bus tours available in Swansea. However, if you want to explore some of the local gems with an excellent guide, try Gower Tours and River Tawe Cruise Swansea. The first one will reveal natural views and intriguing historical landmarks of the stunning Gower Peninsula. The second one will take about two hours and will show you the beautiful landscape of the city from the unique angle.

Gower Peninsula – an awesome and pure place for long and enigmatic walks in beautiful surrounding of the Mother Nature. This countryside looks magnificent at every weather so don’t hesitate to visit this site whether it’s summer or winter.

Swansea Museum – is an excellent museum which is also free, by the way. It presents plenty of thrilling artefacts, like steam engines and World War II items, art works, and even the Egyptian mummy.

Three Cliffs Bay – is located 12 miles to the west from Swansea. You can visit it on your own or take one of the coastal tours. It’s one of the most spectacular beaches the one can find in the area. It’s very peaceful and wonderful for a walk and for horseback too.