Built in 2011, Allianz Stadium has turned into a legendary battlefield hosting Juventus F.C. The ground depicts the club’s glorious history and is home of 41,475 of its dedicated supporters.
Contents: 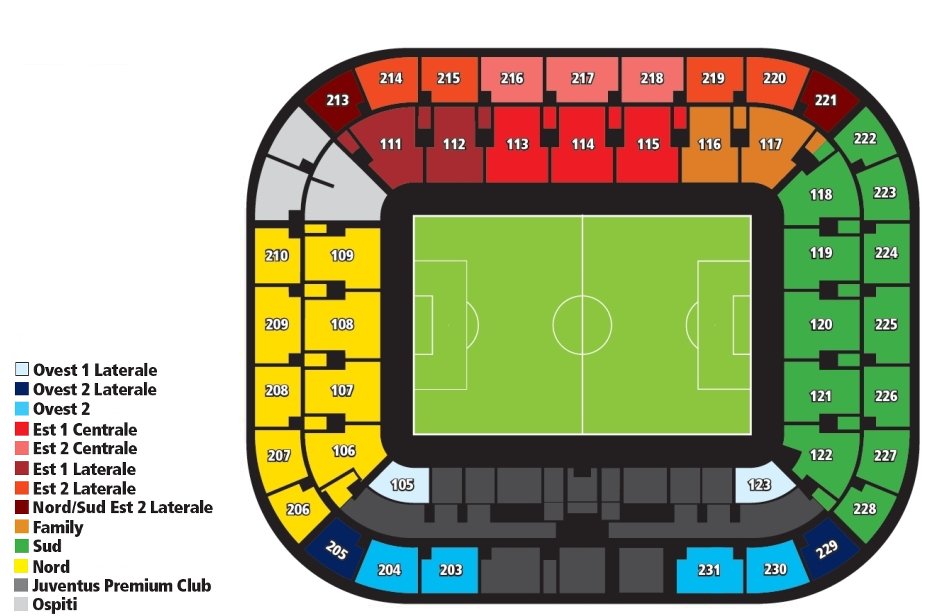 Construction of Juventus Stadium was conducted from 2009 to 2011, and today it’s known as Allianz Stadium. The new venue has quickly become a mighty fortress of La Vecchia Signora (or the Old Lady). But did you know that it replaced Stadio Delle Alpi which had been Juve’s home ground only from 1990 to 2011?

The club’s fans had never actually warmed up to Delle Alpi. The team’s management had to deal with numerous complaints about the stadium’s poor sightlines, and athletics tracks which increased the distance between the spectators and the pitch. The atmosphere, therefore, was often not enough intimidating for the opposition and the Old Lady often lacked the 12th man assistance during the most important battles.

In 2003, Juventus started developing the new stadium’s project. Even the Calciopoli scandal and 2006 relegation to Serie B didn’t derail the club’s plan. Stadio Delle Alpi was purchased by Juventus F.C. from the city of Turin, demolished, and the new modern ground in the English mould was constructed instead.

Although Allianz Stadium is one of the newest football grounds in Italy, the country has five stadiums which can accommodate a larger number of spectators. In 2014, Turin enjoyed a memorable moment when the ground of Juve hosted Europa League final. Sevilla beat Benfica on penalties and claimed another international title for Spain.

Allianz Stadium usually sells out the tickets really fast. On average only 5% of the tickets are left unsold, even considering the fact that the team often plays against the underdogs. During the big local games and especially European battles, it’s easy to miss a chance to buy a ticket. Luckily, I can recommend you Ticket Compare. It is a great timesaving solution which can be extremely helpful whenever you want to buy tickets to Allianz Stadium in Turin. The prices are usually quite reasonable, although they are higher than at the traditional ticket offices. The best thing about this service is that you can always buy a ticket for any match and get a delivery abroad if needed.

The other ways to purchase tickets to Allianz Stadium in Turin include:

As usual, ticket prices depend on the competition status and the opponent. The prices often range from £26 to £107. As a rule, the club starts selling tickets 14 days before the matchday.

Turin is a beautiful Italian city with a marvellous setting. Unlike many other cities in this country, Turin is unchanged by tourism. If you find the hotel in the right area, it will help you to experience the real charm of the first capital of Italy. Booking.com is the greatest hotel search engine providing the best deals and the widest choice of options. You may decide to stay right in the heart of the city or closer to Allianz Stadium. Hopefully, the tips below will help you to find your ideal accommodations in Turin.

The stadium of Juventus is situated about 4 miles northwest of Turin’s historical centre. It makes the ground easily accessible from nearly anywhere in the city. The public transport system in Turin runs smoothly. Considering the fact, that parking options are often limited and the park prices are quite high, public transport is the most convenient way to move around the city.

By Metro and Tram – the closest to the stadium underground stop is Bernini. You can reach it with metro line 1 of Turin. As long as you exit the underground at Bernini on a matchday, take the tram #9. They are marked with a sign “9 / Stadio” for your convenience. These trams normally run for several hours before and after the match. If you need to reach the stadium on a non-matchday, take a bus instead as explained below.

By Car – the stadium’s address is Corso Gaetano Scirea 50, Torino, and you can use it to get driving directions for your smartphone or any other GPS-device.

By Plane – Turin Caselle Airport is situated 12 miles north of Allianz Stadium. It’s the only airport serving the city so it’s pretty hard to get wires crossed. The airport is served by a train which can bring you from Dora Station to the historical centre within 25 minutes. Thereafter, you can use the bus or metro and tram as described above.

You have to purchase a season-long parking space if you want to park at Allianz Stadium. Therefore, the away fans and tourists arriving by cars need to search for alternative parking options which are scarce in Turin. However, there is always a solution. The approximate matchday paid parking price near the sports venue in Turin is £8.

Turin’s food is wonderful and there are so many places to enjoy it. I almost envy those of you who are just about to visit the city for the first time. Piazza Castello and Piazza San Carlo are the most central areas in the city. You’ll find some of Turin’s most innovative and famous traditional restaurants there. However, many good trattorias can be found in the residential areas including the zone near Allianz Stadium.

Juventus FC boasts of rich history and it’s one of the most successful teams in the world. The club is also the record holder for all Italian competitions and has won many international trophies as well. And what another Italian football club could have signed Cristiano Ronaldo for $100 million? Clearly, Juve is a very special club. No wonder, their new stadium has plenty of thrilling things to show off.

Allianz Stadium tours are extremely popular. The ticket will allow you to enjoy a number of the ground’s exclusive parts including the tunnel, media zone, dressing rooms, etc. It’s also fun and exciting that for the price of £16-19 you’ll be also able to visit the club’s glorious museum. Check the timetable and book your combined stadium tour and museum ticket in advance online.

Probably the only reason why you would want to visit the museum of Bianconeri separately from the tour package is if you are absolutely unable to take a stadium tour. Sometimes all tickets are sold out or the tours are not available. As mentioned above, the Juventus Museum visit is a part of every Allianz Stadium tour. The admission to the club’s wonderful museum without a tour package is £10-17. Sometimes the prices may change, but all details and schedules are available at the official website.

Juventus Megastore located in Area12 shopping centre of Turin adjacent to the stadium is the largest football club shop on the Italian Peninsula. Anything you can imagine connected to Bianconeri can be found there. And of course, the Juventus Online Store is always ready to impress the fans of the Old Lady with the variety of iconic apparel, gifts, toys, jewellery, and much more.

Things to do in Turin

Nestled in the foothills of the Alps, this wonderful city has a lot to offer for a tourist. Whether you are a fan of historical, cultural, sports activities, noisy streets or green and tranquil residential areas and natural wonders, Turin won’t disappoint you. Of course, the same refers to food and shopping. About 90% of the most important places of interest are concentrated in the historical centre of Turin. For example, you shouldn’t miss your chance to walk along the banks of the Po. You should also certainly explore some of the best art galleries and museums in Italy.

Traditional hop-on hop-off bus tours with the multilingual audio guide are available in Turin. There are three routes covering the major attractions and basically the entire city. The 48-hour ticket costs £35 and can be used as many times as you like during this timeframe. Another great way to explore this lovely city is to purchase the Torino card. For the same price, you’ll get 48 hours free entrance to over 200 museums, exhibitions, castles, and even boat trips. And don’t forget to explore Torino’s magnificent parks which also deserve your attention.

Palace of Venaria – is the place you cannot skip during your trip to Turin. It’s a UNESCO Heritage site which is often compared with the Palace of Versailles. However, it may be even more remarkable than the royal palace in Paris. With all of its halls and parkland, it’s definitely a must-see in Turin.

Cinema Museum – is hugely popular among the travellers in Turin. Do you feel like Italian cinematic history is not your favourite thing? Well, in any case, the inspiring architecture of this building still well worth visiting it. It also boasts with a spectacular city view from up top of the building.

Parco Valentino – the banks of the river Po know a lot of secrets of the beautiful city. Among the brightest gems located along these banks is this magnificent park. It’s Turin’s second largest park but probably the loveliest one. The Valentino Castle, a nice Botanical garden, several cafes, and a medieval village’s replica can be explored there.