Opened in 1937, Stadio Olimpico has turned into a legendary battlefield hosting S.S. Lazio and A.S. Roma. The stadium depicts clubs’ glorious histories and is home of 70,634 of their dedicated supporters.
Contents: 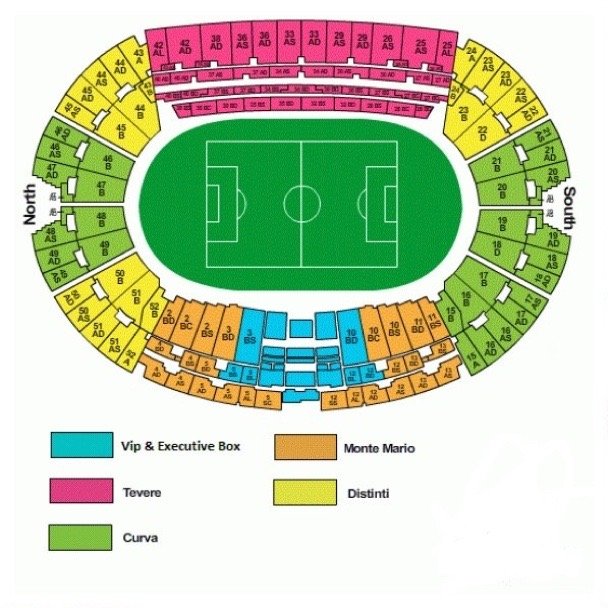 The construction of the legendary arena started during the regime of Mussolini back in 1928. The stadium was opened 9 years later. However, it did not initially serve football purposes. It used to be the major Italian sports complex hosting various sports events including the Olympics 1960. The Second World War was the reason for the grand opening delay. The works were resumed in 1950 followed by the official stadium debut featuring the game between Italy and Hungary on May 17, 1953. The Italian capital will remember that day for years. For several hours, the arena became the centre of the universe for 100,000 supporters. That was the day of the stadium’s record attendance.

Stadio Olimpico does not differ from many other European stadiums when it comes to its shape. It looks like a classical bowl inside with the rows of continuous seating. It should be mentioned that the arena is the home for two major Roman clubs. So, the seats are divided respectively hosting Lazio and Roma fans in separate sectors. Have a closer look at the seating structure:

Derby della Capitale or Derby di Roman is one of the most exciting events for all football lovers whether they support Lazio or Roma. The Roman Derby brings thousands of supporters to Stadio Olimpico where they set amazing shows and performances.

The ticket prices are different depending on the home team. Ticket Compare provides clear pricing and easy ways to purchase tickets in advance. For example, when Lazio plays away, tickets for home supporters are more expensive and vice versa. Moreover, we should consider Roma’s recent success in the Champions League. It still plays in major European tournaments, which also influences the ticket price.

You can opt for several ways to buy tickets to Stadio Olimpico. They are available in any of the official club’s stores as well as on the official website. The price usually starts from 28$ for a seat in the South Stand area right behind the goal. The ticket on one of the longer tiers will cost you from 72$. The most expensive Stadio Olimpico tickets vary between 39$ and 89$. Please, note that matches that refer to A category are more expensive to visit. They include mainly Champions League games.

Lazio tickets are also available at major official selling points and outlets. You can purchase them in more than 1,900 official sites around the city. At the same time, you can visit the official Lazio ticket page for online transactions. The prices are a bit lower if compared to Roma tickets. They start from 22$ for the seat on the North Stand behind the net. The most expensive seats on the Main Stand will cost you about 89$.

As an old proverb says, all roads lead to Rome. Once you get to the Italian capital, you understand what that proverb actually means. The city welcomes millions of tourists from different countries. However, Booking.com will take care of the solid place to stay for a night. Simply choose necessary dates and filter the price that meets your budget. You will find plenty of great offers and hotels near Stadio Olimpico. I made all the work for you. Here is the list of best options.

While being the Italian Capital, Rome offers plenty of ways to travel around the city. It boasts a developed public transport network providing endless ways to get to the stadium as well. Stadio Olimpico is located in the Northern part of the city not far from the Vatican. The ground is a part of the Foro Italico sports complex located on the bank of the river Tiber.

By Tube – the easiest way to get to the arena is to take the Metro A Line and follow to Ottaviano. You can also get there from the Metro B line. All you need is to change at Tirmini if traveling from Tiburtina.

By Bus – Piazzale della Farnesina is the closest bus stop to Stadio Olimpico. You can get there by bus number 32 that departs from Ottaviano.

By Tram – take the tram #2 to get to the closest train station.

By Taxi – Termini is the main station in Rome. You can get to any place from there including Stadio Olimpico. The taxi will cost you about 22$ to get to the arena in less than 15 minutes.

By Car – if you follow the A1 highway, you need to use Exit #5. It will take you directly to the arena. Do not miss the signs to Foro Italico.

By Plane – Leonardo da Vinci – Fiumicino Airport regularly accepts international flights from different countries. The airport is about 40 km from the stadium. Visitors can opt for another alternative in the face of Ciampino – G.B. Pastine. It is a bit closer to the city center.

With so many tourists visiting Rome all year round, it’s always a complicated riddle where to park near Stadio Olimpico. However, there is always a solution. The approximate matchday paid parking price near the sports venue in Rome is 11$.

Rome is not only the capital of Italy. It is the cultural and gastronomic center of the country. Visitors can choose from endless traditional Italian bistros, cafes, pizzerias, wine bars and pubs for any taste. Here you can try classical Italian cuisine in addition to some top-class meals prepared by the most recognizable chefs.

Unfortunately, the stadium does not offer individual or group guides. The same thing is with the clubs’ museum. There are no historical exhibitions dedicated to A.S. Roma or S.S. Lazio in particular. Roma is in process of building a new arena. It is believed to offer more facilities for visitors.

Despite the fact there is not really much to see at Stadio Olimpico, visitors can still buy some memorable things at teams’ official fan stores.

A.S. Roma fan shop is a real godsend for all team lovers. Visitors can choose training kits from the latest collections as well as sportswear for kids.

Things to do in Rome

Even a month is not enough to enjoy la dolce vita at full swing. Rome is so versatile and different with so many great things to see and hear. From the power of Colosseum and the Ancient City with its enormous historic heritage to the exploration of authentic Italian cuisine, monuments, galleries, and lifestyle – Rome is never enough!

Flexible bus tours make it easy for visitors to see at least some major places of interest without staying for long. General sightseeing tours are very affordable. They feature a flexible schedule letting you choose proper time and not miss the match. The price for the general bus excursion starts from 17$ per person and includes such stops as the Colosseum, Roman Forum, Circus Maximus, Pantheon, and any other amazing places.

The Colosseum – visit the legendary arena described in numerous movies and novels. The site where bloody gladiators fought for freedom. Opened in 80 A.D., it was the biggest arena in the world featuring a 50,000 spectators capacity to enjoy the bloody action.

The Trevi Fountain – are you a true fan of a baroque design with a mythological character? Then this place is a must-see. Built in the middle of the 1700s, it depicts the god of the sea accompanied by his trusted guards in the face of Tritons.

The Roman Forum – this place is unfairly less popular than The Colosseum. Many tourists consider it more interesting. It is the part of ancient Rome featuring ancient architecture, governmental buildings, and monuments. Although the place is almost ruined, spectators can still see the Arch of Titus and the House of the Vestal Virgins with their own eyes.