Built in 2017, Mercedes-Benz Stadium has turned into a legendary battlefield hosting the Atlanta Falcons and Atlanta United FC. The ground depicts clubs’ glorious histories and is home of their numerous dedicated supporters.
Contents: 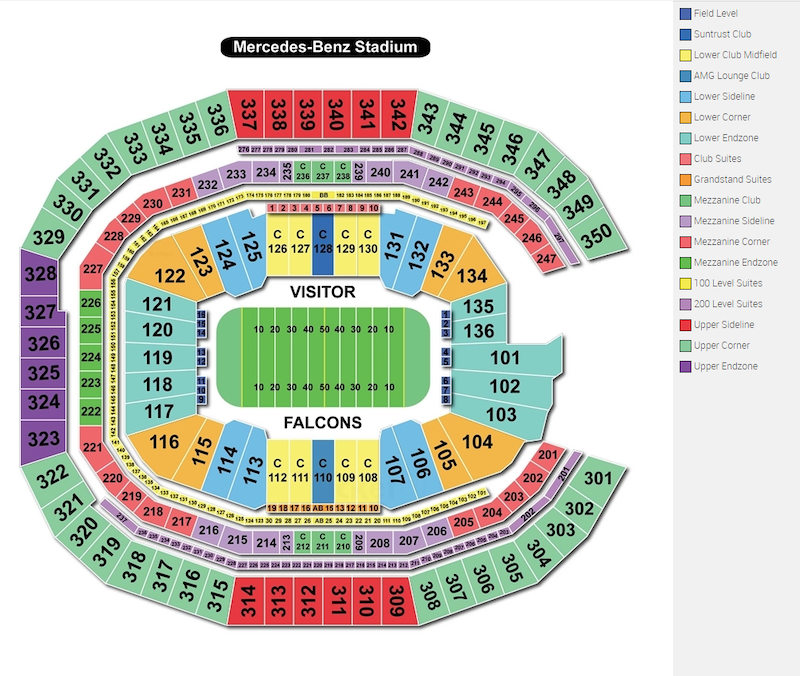 This incredible stadium was opened in 2017 but the roof construction was finished nearly in a year. The retractable roof of the venue consists of eight triangular translucent panels that can adjust its opacity to control light. The retracting lower bowl seats are moved to widen the field before the soccer games and are moved back before the American football games. The stadium also boasts with the world’s largest halo video board. The naming rights belong to Mercedes-Benz until 2047.

Some of the seats are retracting and the arena can be transformed when it’s used for different types of events, including the American football, soccer games, supercross, monster jam, and concerts.

In general, the main seat categories are the next:

Although Mercedes-Benz Stadium is a new venue, Atlanta United became 2018 MLS Cup Champions and is now ranked among global soccer top clubs for attendance. At the same time, the Falcons are the most valuable NFL team, at $2.6 billion. In 2019, the arena hosted Super Bowl LIII with Maroon 5 performing at the halftime show. It looks like this epic stadium has established itself among the most elite football, soccer, and music concert venues in the world for decades.

Since the stadium in Atlanta, Georgia is super popular, it can be hard to purchase tickets. Luckily, there is Ticket Compare, the reliable international service where you can buy tickets even when they are non-existent everywhere else. Sometimes you have to pay extra to make sure you get the tickets but it is really a perfect time-saving solution for any concert, supercross, monster jam, American football, or soccer game at the Benz Stadium.

The other ways to get tickets are listed below:

In my football trips, I always choose to stay as close as possible to the sports venues. The atmosphere is often great in such areas. There is also no need to be nervous about transportation on a matchday when the majority of the fans have to struggle with traffic jams. In Atlanta, you can stay in Buckhead, Midtown, and Downtown. Each of these areas can work quite well. While the most luxurious touristic shopping spots and hotels are located in Buckhead, I suggest you search in Downtown. It will allow you to stay close to the MBS. Plus, there are still plenty of places of interest nearby, and those are far more exciting than glamorous shopping malls of Buckhead. Booking.com is the best hotel aggregator in the world which will help you to find the most appealing accommodations in Atlanta quickly and safely.

The stadium is situated in the heart of Atlanta’s Downtown. Getting there with the help of public transport is a piece of cake even for an inexperienced traveler. On the contrary, arriving there by car can be a pain. The traffic on matchdays is quite annoying and it’s recommended to reserve parking in advance.

By MARTA – a city-wide rail and bus system is an extremely convenient, pleasant, and safe way to get around in Atlanta. GWCC/Philips Arena/CNN Center Station will drop you off at the stadium’s entrance. You can get easily and quickly there from pretty much anywhere in the city.

By Car – I suggest that you use Google Maps to plan this trip because the traffic is unpredictable on the matchdays in the Downtown area. Simply search for Mercedes-Benz Stadium on your device and don’t forget to reserve one of 20,000 parking spots.

By Bicycle – there are around 250 bike racks at the stadium. Relay Bike Share is a cheap and eco-friendly transport option for every traveler in Atlanta.

By Plane – the regular taxi price from Hartsfield-Jackson Airport (ATL) to Downtown of Atlanta, GA is $30. If your hotel’s location is Midtown, it can cost you $32. The ride to Buckhead costs about $40. You can save up to 30 or 40 percents if you use Uber or Lyft. Keep in mind, the prices may get significantly higher a couple hours before the kickoff due to traffic jams. Alternatively, red and gold line trains can bring you from the ATL airport to Garnett Transit Station in 15 minutes. A nice 15-minute walk in north-west direction from there will bring you to the stadium’s entrance.

Mercedes-Benz Stadium can be proud of a huge number of car parks available nearby. But who knows what can happen – sometimes even a lot of parking spots is still not enough. However, there is always a solution. The approximate matchday paid parking price near the sports venue in Atlanta is $10.

As pretty much every other busy venue that hosts a number of important sports events and music concerts of the highest level, Mercedes-Benz Stadium has a lot of places to eat and drink within walking distance. Hopefully, the following hints will help you to choose the finest eateries and bars that will satisfy your needs.

The multipurpose stadium in Atlanta was clearly architected with fans’ comfort in mind. It has the record-breaking number of gigantic video screens, innovative retractable roof, plenty of car and bike parking spaces, a 61,000 square foot outdoor fan plaza, and some of the best food prices.

Experience Window to the City, Skybridges and 100 Yard Club, locker rooms, and the pitch itself during your behind-the-scenes visit to this ultramodern sports venue. Mercedes-Benz Stadium tours normally take place every day from 11 am to 5 pm, except for event days. Adult price is $25, while kids from 3 to 12, seniors, and military pay $20. Book your tour or check the information provided at the stadium’s official website because the schedule and routes are subject to change.

A huge Mercedes-Benz Stadium Team Store can be conveniently accessed through Gate 2 on Andrew Young International Blvd NW. The address of the second store located in Midtown is 1380 Atlantic Dr, Atlanta, GA 30363. Check up-to-date work hours and parking info at Atlanta Falcon’s website. All essential branded merchandise you can imagine can be purchased there. Falcon’s online shop can be found here. Atlanta United FC online shop can be entered here.

Things to do in Atlanta, Georgia

Atlanta is a diverse city which can offer something exciting to anyone. The Goober State’s largest city boasts with a lovely botanical garden, parks and wildlife areas like the Zoo Atlanta and a huge Georgia Aquarium, numerous cinema and arts attractions, Olympic venues, historic sites like Atlanta History Center, Center for Civil and Human Rights, and certainly Martin Luther King Jr.’s birthplace.

Among the tours which can help you to get acquainted with the city are 5-Hour Atlanta Sightseeing Bus Tour costing about $70 and Electric Car Tour for $29. Both are highly recommended for the first-timers. CNN Atlanta Studio tour for $16 is optional. Go there if you’ve already explored the historical and natural aspects of the city and want to find out where the 24-hour news cycle started. Atlanta is rich in history, so don’t miss your chance to feel the spirit of the Civil War, “Gone with the Wind”, and the days of Martin Luther King Jr. while you are there.

College Football Hall of Fame – the amazing fan experience starts as soon as you enter this place. Interactive games in virtual goggles, fun activities, and exciting exhibits are loved by the football fans of all ages.

World of Coca-Cola – even if you are not a fan of this beverage, it’s hard to admit that this brand has become a worldwide symbol of the modern era. This unique sightseeing spot tells us an amazing story of Coca-Cola, displays the top-notch art and rare memorabilia connected with the brand and over a hundred beverages produced under this trademark worldwide.

SkyView Atlanta – enjoy the magnificent views of Atlanta’s Downtown from the modern Ferris wheel with air-conditioned/heated glass pods. If needed, you can upgrade to the VIP pod to spend more time meditating in the air.