Built in 1974, Signal Iduna Park stadium has turned into a legendary battlefield hosting Borussia Dortmund. The ground depicts the club’s glorious history and is home of 81,365 of its dedicated supporters.
Contents: 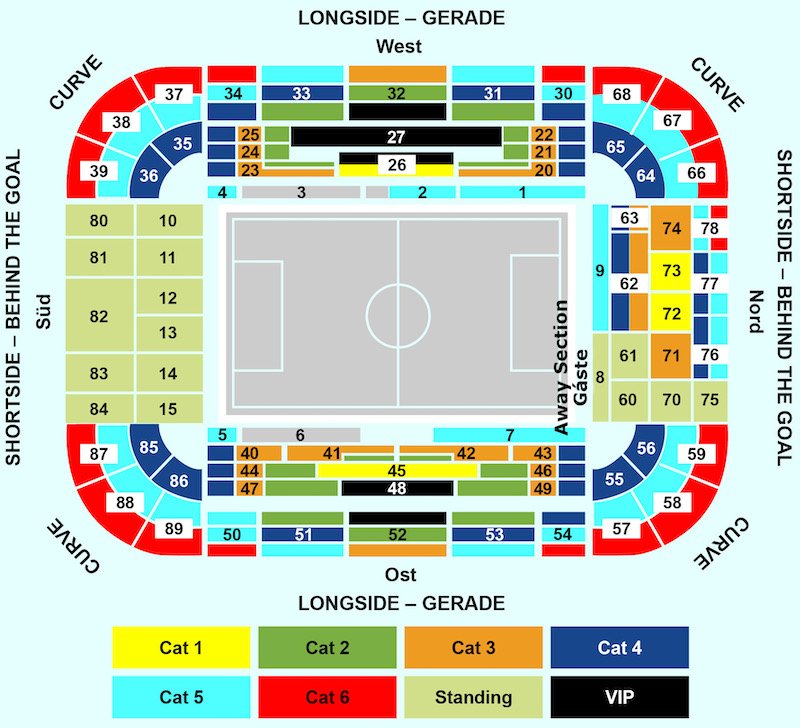 Borussia Dortmund, or simply BVB, was founded in 1909 by sixteen football players from Dortmund. The team had been playing at Stadion Rote Erde till 2 April 1974, when Westfalenstadion’s three-year construction process has been finished. Westfalenstadion is currently officially known as Signal Iduna Park in consequence of a sponsorship deal with a local insurance company. In fact, the stadiums’ original name derives from the club’s home province of Westphalia in Prussia.

Signal Iduna Park was one of the first rectangular shape grounds back in the 1970s. Its four separate stands inspired many other architects to create a new generation of football stadiums. When Westfalenstadion was first opened it only had one tier. In the 1990s, during Golden age of BVB, the second tiers have been consequently built over each of the ground’s stands. All four rectangular stadium’s corners got closed during the recent renovation which finished in 2003.

Currently, the ticket categories at Signal Iduna Park include:

Signal Iduna Park is the seventh largest football ground in Europe and it’s the biggest one in Germany. The arena is widely known for its terrific atmosphere and one of the highest average attendances in Europe. It even holds the current European record for average fan attendance. It was documented in the ultra-successful 2011/12 season when 80,588 spectators were present at Borussia’s Bundesliga home matches on average. Westfalenstadion hosted a number of incredible events including several 1974 and 2006 FIFA World Cup matches, the 2001 UEFA Cup Final, national friendlies and qualification matches of the Germany national football team.

It’s extremely hard to buy tickets for BVB’s matches at Signal Iduna Park, so I prefer using Ticket Compare for this purpose. The other options you can try are as follows:

The regular prices for Borussia’s home games are the next:

When Borussia Dortmund plays against their rival teams, Schalke 04 and Bayern Munich, the ticket prices are increased by about 20%.

So it’s time to be looking for the hotel room in Dortmund, right? Booking.com has got you covered! Once powered by heavy industry, the largest city in the Ruhr area is now a completely different place. Dortmund has turned into a high-tech manufacturing city with lots of colossal monuments reminding everyone about its past days of steam turbines, steel factories, and mines.

There are several simple and pleasant ways how you can get to Westfalenstadion. For your convenience, I’ll write about the main sources of transportation in Dortmund. Hopefully, it will become a time-saver for you during your football journey.

By Tube – it’s known as Dortmund Stadtbahn or simply U-Bahn. The city’s light train is integrated into the Rhine-Ruhr Stadtbahn network, making it easy and convenient to travel not only within the city limits but much beyond. The most convenient for the football fans are the lines U45 and U46 which are only a five-minute walk to Westfalenstadion.

By Train – Dortmund Hauptbahnhof (Dortmund Hbf) is the city’s central station and the main hub for the trains coming from the other German cities. However, Signal Iduna Park also has its own station. For information about train timetables in Germany visit bahn.com.

By Bus – Westfalenhallen is the closest bus stop to the ground. The bus line 450 is the best option for those using this transportation method. The additional information on all Dortmund’s bus and train routes and schedules can be found here.

By Car – while getting to the arena by car on a matchday may be a nightmare in most of the other major European cities, Westfalenstadion is a different story. Simply use your sat nav or smartphone and search for “Signal Iduna Park Stadium” or “Strobelallee 50, Dortmund” to start with. As soon as you see a glass façade of the ground, start searching for over 10,000 paid parking spaces available nearby. You may want to book it in advance here. TU Dortmund University is your parking plan B. There is a free shuttle that will help you get from there to the sports venue and back. You can find it by searching for this address: Otto-Hahn-Straße, A45 exit “Eichlinghofen”, then B1 exit “Oespel/Kley”.

By Plane – there are a few ways you can get from Dortmund Airport to Signal Iduna Park Stadium. Eurobahn RB59 is an hourly train costing £1 or £2. The travel duration is only 14 minutes. The second way is to rent a car. The third one is to take a taxi which approximately costs £31-45. Unfortunately, there is currently no Uber in Dortmund but they have another worldwide rideshare known as MyTaxi. It can save you a few dollars comparing with a regular taxi service.

Although there are over 10,000 park spots available at Signal Iduna Park, sometimes it’s not enough. However, there is always a solution. The approximate matchday paid parking price near the sports venue in Dortmund is £7.

The cuisine of Dortmund is diverse and the football fans can find a lot of great eateries to match every taste and pocket. For example, cheap food from some of the kiosks is extremely popular and tasty. Whenever you see a crowd of people eating hot sausages in Dortmund, you may also give it a try. If you are a gourmet or just in the mood to enjoy a great dinner in a top-notch venue, Dortmund is at your disposal as well. There are numbers of Italian, Chinese, and other Asian restaurants, pizzerias, classic local pubs, bakeries that work like cafes, and much more.

Borussia’s epic ground with recognizable 62-metre high yellow pylons boasts a number of thrilling stories and has a lot of things to show off. The BVB Stadium Tour has a number of exciting variations. It is an incredible experience which won’t be forgotten by any fan who takes that little journey.

Germany’s largest stadium is really an impressive modern sporting venue. I’m sure you’ll love spending time with the guide who is knowledgeable of many interesting stories about the arena, the club, and its players. The tour will take you behind scenes and will reveal the catacombs of the stadium, Borussia’s dressing room, the tunnel, Borusseum, and the record-breaking standing terrace of Signal Iduna Park. The tour options are as follows:

The tours are available in German and English. The current prices and additional information about each tour can be found on BVB’s website.

On its 99th birthday, in 2008, Borussia launched its museum known as Borusseum. Fan culture of BVB is truly exceptional, and both the club and the museum have a special attitude towards the fans. Today Borusseum also serves as a communication centre conducting many social and entertaining events. Interestingly, the showrooms of Borussia’s museum are an ad-free zone. There is a Borusseum virtual tour available at the museum’s official website, which is only available in the German language though.

The main offline store for BVB fans is located right at the Signal Iduna Park Stadium. Borussia Dortmund also has got awesome online fan shops. The customers from Germany, Austria, Luxembourg, Liechtenstein, and Switzerland can use the official online fan shop. Black & Yellow Worldwide online fan shop serves all other countries. They have lots of fun merchandise including the official BVB alcoholic beverages and a vivid BVB book stadium tour.

Things to do in Dortmund

Thrilling art museums, beautiful parks, Florian Tower with a spectacular 360° panorama over the city from a height of 460 feet, and one of the world’s largest botanical gardens are among must-see things in Dortmund. This city of contrasts also has many weird examples of industrial monuments and architecture from the past century. Today the outdated giant constructions are used in completely new ways. And it’s amazing to recognize how things have changed in this city. Shopping guide, visitor centre, detailed nightlife guide maps, and other important information about the city can be found at Dortmund Tourismus.

Dortmund Stadtrundfahrt or Dortmund City Tour is a perfectly organised way to discover the best of the city. The tours are available from early April through December 30 every day except for Christmas. Guided bus tours are very flexible so you’ll be able to enjoy the city at your own pace. Red double deckers are easy to spot in Dortmund. Each round trip lasts about 1 hour 40 minutes and you may either take the whole trip or hop off at any of twelve stops. The exciting audio guides are available in ten languages.

German Football Museum – located just in front of Dortmund’s main train station, this amazing museum is a real treasure for every football fan. It’s a new modern interactive museum mainly dedicated to the World Cups that took place in Germany and the country’s national football team. You’ll find plenty of exciting things to look at and it’s pretty informative even if you are not taking a guided tour.

Botanischer Garten Rombergpark – this huge botanic park is really special and it has a nice café on site and the zoo nearby. It has more than enough of shaded areas for a summer walk, a playground for kids, nice wooden benches, lots of bright flowers, and a peaceful river with a pond. Some pretty large wild birds can be often spotted there.

Westfalian Museum of Industry – is definitely the most unusual sightseeing you can discover in Dortmund. It’s actually a well-preserved abandoned colliery which was once an important part of German industrial infrastructure. There are some incredibly great factory buildings, machines, and mechanism which have been luckily saved from demolition. In many other cities and countries, similar places look disastrous. But in Dortmund, the whole place almost looks like a piece of art.