Opened in 2001, Veltins-Arena has turned into a legendary battlefield hosting FC Schalke 04. The stadium depicts the club’s glorious history and is home of 62,271 of its dedicated supporters.
Contents: 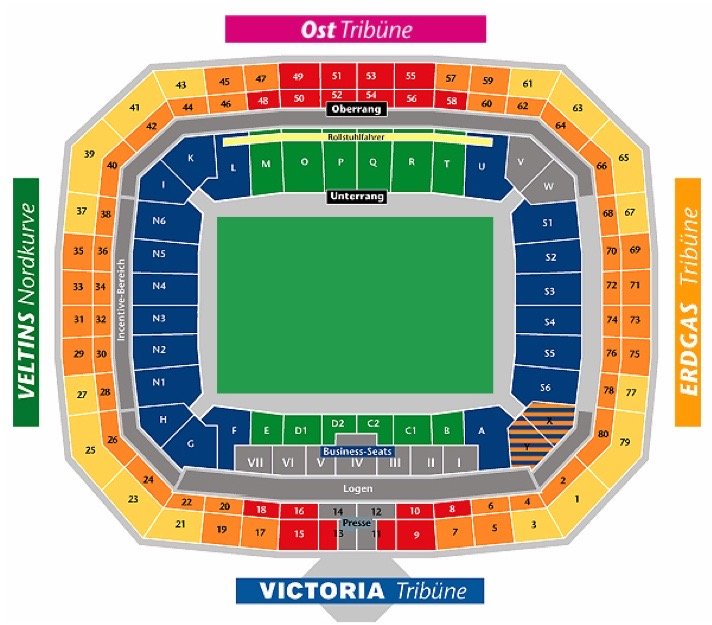 It took three years to build the new arena that became a new home stadium for FC Schalke 04. Opened in 2001, it was initially known as Arena AufSchalke. However, the name was replaced by Veltins-Arena due to Veltins sponsorship that actually helped to complete the construction works. The newly-established stadium replaced the older one – Parkstadion. It became the first ever privately-financed and owned arena in Germany.

In other words, Veltins-Arena opening resulted in a new trend when a football club owns its stadium. Even today, it looks very modern and stylish. It boasts of various facilities hosting not only the football team from Gelsenkirchen but also local ice hockey team, plenty of entertainment venues, etc.

The arena features a typical structure for many of the European football stadiums. It consists of four main stands. They include:

The shape of the bowl combined with continuous seating tiers make it fast and simple to get to your seat even if you visit the arena for the first time. The stadium has up to 91 special facilities and boxes, numerous WCs, food courts, facilities for disabled, etc. In other words, Veltins-Arena is a modern European playground that offers everything you may need during the match.

Schalke 04 stadium includes terrace areas with standing seats as well as posh areas for those who require 100% convenience. Ticket Compare makes it easy to pick and buy tickets pretty much at any tribune for any match.

Standing grounds are for the most active supporters. Those seats are usually the cheapest ones. If you crave for more comfort, seating area tickets will be a bit more expensive. The ticket price will depend on the stand you are going to settle. The cost range is as follows:

Please, keep in mind that ticket prices may be different. They depend on various factors. International games are more expensive, while tickets for the home league games are cheaper. At the same time, you should note that the stadium capacity for the international tournaments can be reduced down to 54,740. Make sure you book seats in advance using the above-mentioned online service.

Located in a not very busy region of Gelsenkirchen, Veltins-Arena does not offer plenty of accommodation options for visitors. That is where Booking.com will appear to be rather helpful. Book a hotel in advance instead of wasting your time during the matchday. You can choose from quite a few offers that will meet any budget. I decided to save your time and made in-depth research of the area around the stadium. Here are some of the best accommodation options to select from:

The stadium hardly boasts a good location from the transport perspective. It is situated in the northern part of Gelsenkirchen with only a few ways to get to the football ground. At the same time, it would be wrong to say that Gelsenkirchen has a poor public transport network. You can always rely on buses and trams during your trips within the city. Also, Gelsenkirchen is located not far from Dusseldorf international airport, which is very convenient for the fans coming from abroad. Moreover, it has the railway station that accepts trains from all around Europe. While your path to the stadium might turn into a challenge, getting to the city will not become a problem at all.

By Bus – taking a bus is hardly the best idea. There are no bus routes that will take you directly to the stadium.

By Tram – a tram is the only way to get to the arena using public transport. You should take tram #302. It departs from the main railway station Hauptbahnhof. Make sure you choose the right direction. It will take you about 15 minutes to get to Veltins-Arena from the station. So, be ready to get off on time.

By Taxi – it seems to be a good way out considering the lack of public transport. The prices are pretty affordable. For instance, a ride from the city centre to the stadium will cost you about 17$.

By Car – the arena is located between two major autobahns. They include the A2 and A42 highways. If you need to get to the arena, you need to follow exits 6 or 7 respectively. Make sure you get to the destination in advance, considering a limited number of parking places around the stadium.

By Train – Hauptbahnhof is the city’s central railway station. From there you can take the Light Rail that will take you almost to the pitch.

By Plane – Gelsenkirchen is situated about 45-minute drive from Dusseldorf International Airport.

After arriving at Veltins-Arena, you can find it pretty difficult to spot free parking for your car. However, there is always a solution. The approximate matchday paid parking price near the sports venue in Gelsenkirchen is 6$.

Located in what we call a desolate area, Veltins-Arena does not offer plenty of eating out opportunities. Most of the cafes and restaurants are located in downtown. However, it does not mean you will have to starve. Visitors can find some cosy cafes as well as a couple of pubs to try local beers, snacks, and specialities. Here are some of the best options near the stadium.

Would you like to learn more about Schalke’s multi-functional venue? Veltins-Arena tours reveal some hidden stadium parts. It’s a unique chance to look behind the scenes of the entertainment area and media facilities and to learn lots of facts and fun stories from the history of the club and its stadium.

You will see not only traditional places like players’ dressing rooms and the tunnel but also have a chance to see how the press cube works. The guides will show you how the pitch can be removed. You will see the thrilling process of closing the stadium roof. General admission includes visiting Schalke 04 museum as well.

The prices are as follows:

Additional 22$ charge per group if a foreign language tour is desired.

Individuals/Families for a public Arena Tour:

Both individual and group tours are available most of the day.

The museum covers 600 square meters of Schalke 04 glorious past and present. Visitors can choose from different exhibitions. They include interactive tours featuring the latest technologies as well as the stand with exclusive souvenirs and artefacts. The museum was renovated in 2009 and keeps the club’s heritage for the next generations.

You can find numerous Schalke 04 official fan shops all over the city. There are at least 6 locations you can come across the store. Visitors can buy everything from souvenirs to official training kits, players’ jerseys and more.

Things to do in Gelsenkirchen

Gelsenkirchen is an industrial city, but it has plenty of attractions to offer. Despite the fact Schalke 04 is the major love and dedication for locals, the city has been an educational and service centre of the region since the 19th century. You may come across different monuments during your walk along its streets. There are lots of parks and green areas for recreation. Gelsenkirchen is popular for its shopping facilities as well. In any case, you will never get bored in this city.

You can explore Gelsenkirchen on your own or opt for a general sightseeing tour. It covers some of the major places of interest. It takes place every Sunday from 11 a.m. The price starts from 8$ per child aged 6-14. Tourists over 16 should pay 20$. The tour includes some of the most popular spots such as Nordsternpark, Schloss Horst, Schloss Berge and more great places.

Zoom Erlebniswelt – is a great choice for those who love nature and animals. The venue boasts an amazing landscape design and an overwhelming zoo. Here you can come across hypos, elks, rare birds and more. It is great entertainment for the whole family.

Alma-Park – is like Disneyland for adults. It is not just a theme park. It is a huge entertaining area with plenty of things to do. Try video games and interactive attractions like paintball, learn how to use an arrow and bow or enter the escape room with your friends.

Ruhr Museum – is the museum which tells the story of the mining industry that used to be the region’s major activity. It is a good chance to dig deeper into the past of the country and learn about the industrial side of Germany.