Built in 1884, Anfield stadium has turned into a legendary battlefield hosting Liverpool F.C. The ground depicts the club’s glorious history and is home of 54,000 of its dedicated supporters.
Contents: 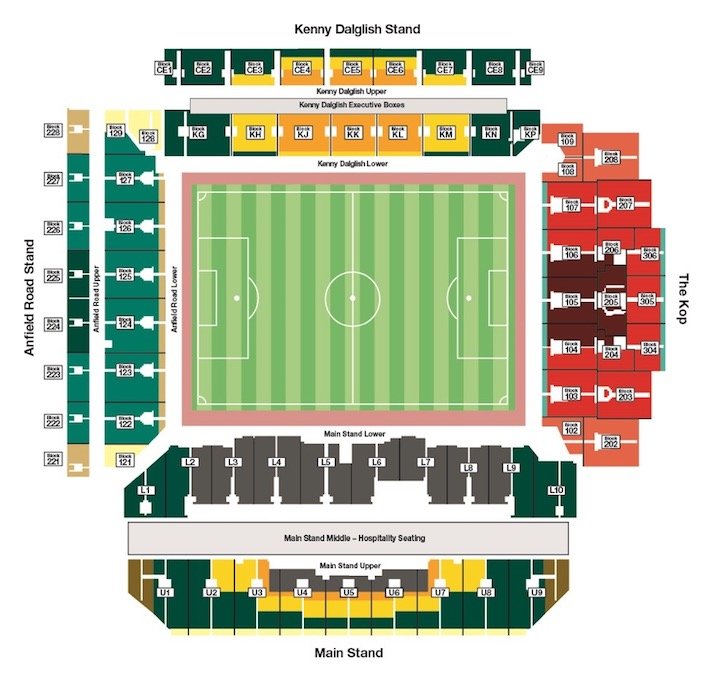 Anfield stadium was originally built as the home arena of Everton. However, the dispute with the club’s president resulted in the fact, the team moved to Goodison Park in 1891. Since that time, Anfield has been the only home stadium for Liverpool F.C. The home of “You’ll Never Walk Alone” differs from other stadiums due to its unique seating plan. Apart from a typical colored seats’ category, Anfield features four major stands divided into and lower rows. Each stand has its original name. So, guest visitors will hardly face any difficulties in finding their seats. The stand names are as follows:

Each stand has necessary facilities letting disabled people and fans in wheelchairs to get to their seats effortlessly.

Ticket Compare offers a fast and safe way to purchase tickets to any stand in a couple of seconds. Simply go to the website and choose the necessary category without any registration. Make a couple of clicks and get your e-tickets right on your email.

You can also visit the official website and choose tickets in accordance with a specific category. They include tickets for disabled people, membership tickets for the entire season in addition to special offers. Pay attention, that there is no other way to buy tickets rather than online. Consider this and plan your purchases in advance. I recommend buying tickets at least 6 weeks before the matchday.

Note: the only way to buy Anfield tickets is to go online! No boxes or land sales are available!

Apart from rock music and football, Liverpool has something to offer for its visitors to see and hear. However, you should think of a good place to stay. This is where Booking.com will come in handy. It delivers plenty of nice-matching accommodation offers to suit any budget. Whether you are looking for a chance to save a couple of pounds or require premium-quality services, Booking has them all in one place!

The stadium is situated in the northern party of the city about two miles from the downtown. The region is called Anfield area. The arena itself in the middle of this borough. Goodison Park is half a mile from Anfield. Stanley Park divides two stadium rivals. A good place to walk around and breathe some air full of football spirit.

By Car – traveling by car is a good alternative to public transport. You will hardly face any difficulties to find a parking place near the stadium. You need to get to the junction 4 toward Liverpool/A580 when driving along the M57 heading north. They make your way to Liverpool for about 4-mile distance passing the Walton Hall Park on the right. Then turn right onto Utting Avenue and you will see the site.

Soccerbus – it is a separate type of bus especially for football fans. It follows the Merseyrail Northern Line and departs two hours before each match from Sandhills Station.

By Train – Lime Street Railway Station is the nearest stop for those who travel outside Liverpool. The station is located about 2 miles from Anfield. If you travel by train without the city area, you can benefit from a developed railway network with 67 operating stations across the Liverpool area.

By Taxi – if you need to get to the stadium by taxi from the city center, the price will generally range from 9-12$. Visitors can also benefit from special taxi buses that depart from St Johns Lane 3 hours before the starting whistle.

Liverpool boasts an advanced public transport network. It offers several types of railway and bus passes whether you travel alone or with a group of friends. Solo ticket prices start from 6$ (one-day tickets) to 890$ (annual passes). Check all available prices and passes on the official public transport website.

By Plane – Liverpool John Lennon Airport accepts international flights on regular basis. It is located about 13 km from Anfield. You can take a bus or taxi to get there within 10 minutes.

The number of official car parks at Anfield is limited. And of course, you cannot just park anywhere you want – the street parks will be occupied hours before the starting whistle. However, there is always a solution. The approximate matchday paid parking price near the sports venue in Liverpool is 5$.

Liverpool is all about classic British pubs, underground concert halls, and BBQ & Grilled venues. You will hardly find a more authentic place to try a pint of traditional British lager or try fish & chips. The Anfield area is not an exception. Here you can benefit from a selection of pubs and restaurants to eat out before or after the match.

Although the matchday is the major event at Anfield, Liverpool home arena offers numerous way to entertain visitors with different stadium tours and programs. Guests may choose from various excursions. Some of them include visiting Liverpool F.C. museum as well as meeting team’s official mascot. Each program is full of unexpected surprises and memorable moments. Don’t miss your chance to know Liverpool from the inside.

The stadium tours are divided into several programs. You can choose the one to meet your preferences and likes. Some of them include visiting the museum and meeting the official mascot. Others will give you a chance to hear some of the club’s legends live. The programs are as follows:

Additional programs include Mighty Red Special Appearances where you can meet the official team’s mascot and have tons of fun.

Grab your chance to witness museum’s brand new exhibitions that highlight the glorious story of the club. Watch its trophies and the images of legendary players. The Steven Gerrard Collection depicts some truly unique things donated by the ex-captain. Hall of Fame, LFC heroes of the past and other exhibitions are available for all visitors.

Note: the museum closes up 1 hour before the starting whistle in matchdays. When the early game takes place, the museum will re-open its doors to visitors until 4 p.m.

The official LFC fan store is more than just a webshop. It highlights the team’s latest news and stats. There you can check the schedules of Liverpool’s upcoming matches. Fans can buy different stuff from sports accessories to jerseys and the widest collection of football souvenirs you have ever seen.

For those looking for ideas on what to buy in a fan store and those whose trip to Anfield stadium is being postponed, I wrote an insightful article “Top 45 Xmas Gifts for Liverpool’s Fans”. The provided list is relevant not only during the winter holiday season. So, hopefully, you’ll enjoy these wonderful gift ideas.

Things to do in Liverpool

Liverpool is the home of football, British pubs, and rock music. It gave a birth to some legendary bands like the Beatles. Here you can touch the music history on every step as well as visit undergoing concert halls and venues that put on incredible shows. Go wild with the crowd or visit some other places of interest in the city of rock-n-roll and football.

Start exploring the city with a general sightseeing tour. Hop-on-hop-off bus tours are the best and most cost-effective solution. The route involves all major places of interest, building, museums, and pubs that have become the main signature of Liverpool. The program starts at Albert Dock and goes through 14 different venues that are surely worth visiting. They include the iconic Philharmonic Pub, Liverpool Cathedral, The Cavern Quarter, Cain’s Brewery Village and many other exciting places.

The Beatles Story – you will never forgive yourself for not visiting this museum while being in Liverpool at least for one night. It tells a story of one of the most popular rock bands of all times. From the very start while playing in the basements to the Beatles’ world glory. Listen to your favorite songs or watch the legendary Yellow Submarine movie.

Museum of Liverpool – a place where modern arts and history meet. The museum is free to enter. It regularly hosts various exhibitions and programs for all tastes. Modern arts, photo exhibitions, regional city tours are available for guests daily.

The Hardmans’ House – a good site for those involved in photography art and its history. The museum is the home and studio of the legendary photographer Edward Chambré Hardman who worked together with his inspiration, wide and soul mate Margaret.