Built in 1892, Goodison Park stadium has turned into a legendary battlefield hosting Everton F.C. The ground depicts the club’s glorious history and is home of 39,572 of its dedicated supporters.
Contents: 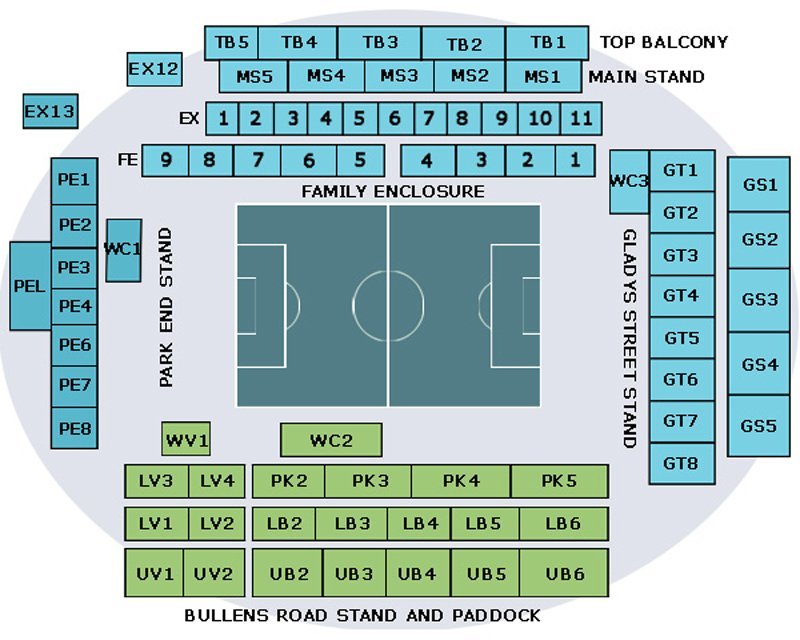 Before construction of the Grand Old Lady, Everton FC used to play at Anfield but a rent dispute made them move to a new ground. This happened in 1892 and only two years later Goodison Park already hosted the FA Cup final.

The ground got quickly developed and multiple reconstructions took place. Everton’s home even became the best stadium in Great Britain at the beginning of the 20th century. Back then, the club was considered the richest one in the country. By 1938, all stands of Goodison Park were two-tiered. It was a tremendous achievement for the club’s management. In 1994, the last development took place.

Currently, it seems that the Toffees won’t be investing in their home any longer because the club is focused on the idea to construct a new ground from scratch. But their plans are still unclear.

The shape of Goodison Park is traditional for the English football grounds. It has four separate stands, each covered with a separate roof. Their names are as follows: Goodison Road Stand, Bullens Road Stand, Park End Stand, and Gwladys Street Stand. Unfortunately, sometimes you can get a seat with a view obstructed by the post at the Grand Old Lady. To avoid this, I suggest you choose the seats at the Park End. The categories of seats include:

During the period when Everton’s stadium was one of the country’s best football grounds, it hosted a bunch of events of the highest importance. The matches of the 1966 World Cup including the semi-final battle between West Germany and the Soviet Union were among them.

As was mentioned above, not all seats have equally good views at Goodison Park. Also, Everton sells out tickets quite often. Therefore, purchasing tickets in advance is your best possible choice. Ticket Compare is a timesaving solution which works great when you want to buy tickets to the home match of Everton. You can often find a ticket at a reasonable price there, although it’s naturally more expensive compared to the traditional services. They include:

Liverpool is one of Britain’s famous cities which has many tourist attractions and therefore has lots of accommodations to choose from. Booking.com is a convenient and reliable website which I always use myself and encourage my friends to use its benefits as well. This hotel aggregator always has wonderful deals and a whopping number of reviews from the real customers which can be extremely helpful. Below you’ll find some of Liverpool’s hotel tips.

It’s sometimes inconvenient when the football stadium is located far away from the city’s centre because the football fans hesitate whether to stay closer to the ground or closer to the touristic attractions. In fact, Goodison Park’s location is great for Liverpool’s sightseeing as well. Furthermore, the stadium is easily reachable from the centre via public transport and taxis.

By Shuttle Bus – if your hotel is located close to Sandhills Rail Station, Everton FC runs shuttle buses from that station to the stadium. This option is only available on game days.

By Car – Goodison Park’s address is Goodison Road, Walton, Liverpool. Simply enter this address at your pocket device and enjoy the ride.

By Rail – there are three train stations in Liverpool – Kirkdale Station (KKD), Liverpool Lime Street (LIV), and Liverpool Central Station (LVC). The first one is approximately a 15-minute walk from the stadium of the Toffees. The other rail links are less convenient for football fans. The distance from each of them to the ground is about 2.5 miles but you can always take a bus or a cab from there.

By Plane – Liverpool is served by Liverpool John Lennon Airport (LPL). The distance from the air gates of the city to Everton’s stadium is about 10 miles. It’s easy to get from the airport to the central part of the city using public transport. The trip takes about 60-80 minutes depending on the traffic load.

Parking options near Everton’s stadium are very limited, especially on a game day. However, there is always a solution. The average matchday paid parking price near Goodison Park in Liverpool is £15.

Liverpool is famous for its fine food. If you are looking for some of the greatest restaurants and bars near Goodison Park, I’ll be glad to share my tips with you. There are certainly many other great places to eat-out in Liverpool. So don’t be afraid to experiment if you want to discover Liverpool’s tastiest secrets.

In previous times, Everton’s stadium used to be one of the greatest football grounds in England. Therefore, it hosted plenty of interesting matches and fans enjoyed the performances of the highest quality. Today, many spectacular local and European-level football matches still take place at Goodison Park. Another good thing to experience there is a stadium tour.

Guided tours at Goodison Park cost only £12 but are not run every day. The only option to secure your spot on the tour is to book it online. Unfortunately, matchday tours are not available and there is no museum at the ground. In general, Everton’s stadium tours are fun and include a standard program featuring the tunnel, dressing rooms, and similar kind of things.

Whether you are the most prominent supporter of the Toffees or just an occasional football fan who happens to visit the Grand Old Lady, you might want to get a souvenir which will always remind you about your trip. You’ll find plenty of apparel, nice gifts, and souvenirs at Everton Two – the club’s fan store located at 11 S John St, Liverpool L1 8BU. And of course, Everton’s official fan store is also presented online.

Things to do in Liverpool

This north-west English port city is mostly known for the Beatles and its football clubs but there is so much more to learn about Liverpool. You will love to explore UNESCO World Heritage City, walk in the parks, and see the galleries, museums, and royal buildings. The city’s unique musical history is also worth mentioning as there are plenty of world-class attractions connected with rock and jazz music, underground pubs, legendary nightclubs, inimitable record shops, and much more.

The multilingual city bus tours are insanely popular in Liverpool. Hop on hop off double-deckers depart every 20 minutes making it a super convenient transport for the tourists. The other amazing tour option is the Beatles and sightseeing walking tour. The local guides will show you the legendary locations and will tell you chin-dropping stories about the rock band that changed the world.

Sefton Park – the place is known for acres of green spaces, the Victorian Palm House, and some of the best children’s playgrounds in Liverpool. Rent a bike and feel the relaxing atmosphere of this stunning botanical oasis.

Mersey Ferry – take a ferry across the Mersey and enjoy the alternative views of the city. There are many tours to choose from. For example, you may like daily river cruise, special event tour, hop-on-hop-off cruise, or even get a joint ticket which will allow you to experience the other Liverpool attractions as well. Find out more at Mersey Ferry’s official website.

The Beatles Story – not only the Fab Four’s fans will enjoy this spot. Prepare yourself for a very special immersive walk-through journey and get a real taste of the epoch of rock-and-roll. The Beatles merchandise is also a great gift from a trip to Liverpool, and this place has the largest official Beatles store in the world.