Built in 1999, DW Stadium has turned into a legendary battlefield hosting Wigan Athletic F.C. The ground depicts the club’s glorious history and is home of 25,138 of its dedicated supporters.
Contents: 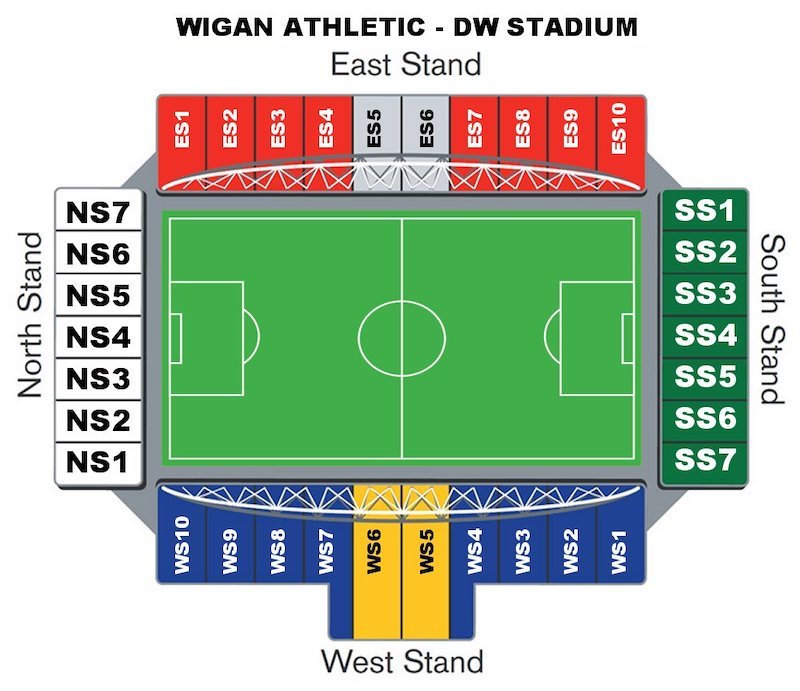 Wigan Athletic was founded in 1932. They are among the youngest teams in the English Football League. Until 1999, they played at Springfield Park but the DW was finally completed in August of that year. This multipurpose ground was built at the joint effort with the rugby team known as Wigan Warriors. Today both teams play their home matches at the DW Stadium.

The ground has a classic English design with four distinctive single-tier stands covered with the roofs. The Springfield Stand is the main stand of the DW Stadium and its name refers to the name of the Wigan’s first ground. The Boston Stand is also known as the East Stand, and it also goes along the pitch. The loudest of all is the South Stand filled with the Wigan’s most dedicated fans. And, finally, the North Stand is normally occupied by the away team’s fans. Other than that, it looks exactly the same as the opposite South Stand.

Speaking about categories of seats, they are non-existent at the DW Stadium. Of course, you can choose the seat at the particular stand, unless you are the away fan who should sit at the North Stand. However, ticket prices for the home games of Wigan Athletic are the same regardless the location of the seat.

One of the brightest battles ever played at the arena was the title-deciding match of the 2007/08 Premier League season. The goals scored by Cristiano Ronaldo and Ryan Giggs helped to make Chelsea’s fans really upset as Manchester United won the title. At that day, the DW Stadium only had five empty seats.

If you wish to visit the match at Wigan Athletic F.C.’s home ground, it’s pretty easy to do it in the vast majority of cases. You can go to Stubhub and select the ticket which perfectly meets your demands. Also, you can purchase the tickets from the sources listed below:

Unlike, at the majority of the other English stadiums, the ticket prices at the DW Stadium do not depend on the seat category. There is only one price for any ticket at the ground of Wigan Athletic. The ticket prices at the DW normally range from 27 to 40$. You don’t have to pay 3$ standard booking fee if you buy the ticket with the Print@Home facility. There are also discounts available for various categories of supporters, such as ‘Over 65 years’, ‘Under 18 years’, ‘Under 11 years’, and ‘Under 5 years’.

Wigan is an old mining and mill town that belongs to Greater Manchester area. It has a rich historical and industrial heritage and some beautiful natural sights. Its population is just around 105,000, whilst over 200,000 people live in the wider borough. Booking.com has plenty of good hotel options which can make your stay in Wigan enjoyable and safe.

Wigan is a small town, and although the DW is located a little out of town, you can pretty easily get from anywhere in Wigan to the sports venue. In many cases you can even walk to the arena. Anyway, I’ve got a few transportation tips for you.

By Train – Wigan North Western station services the majority of the passengers arriving at the town from London. Wigan Wallgate station mainly connects it with the nearby towns such as Bolton, Kirkby, Southport, and certainly the city of Manchester. The distance from Wigan’s train stations to the ground is about 1.4 miles. Both stations are a short walk from each other and they are located exactly in the town’s centre.

By Car – the DW Stadium’s address is 15 Loire Dr, Wigan WN5 0UH. Use your smartphone to get further directions. If you are travelling to the Wigan’s home game by car, it’s better to arrive an hour earlier than most of the other fans. The arena has about 2,000 official parking spaces in Car Parks 1, 4, and 5. It’s also relatively easy to find on-street parking in the nearby neighbourhoods.

By Plane – both Manchester Airport and Liverpool John Lennon Airport are located about 30 miles away from the DW. Thus, both of these air gates seem to be equally great for the travellers heading to Wigan’s arena. However, there is a train going from Manchester Airport to Wigan North Western station and it will take you 1 hour 15 minutes to get to the ground from that airport. In case you’ll be travelling from John Lennon airport, it will take you almost twice as much time because you’ll have to get to Liverpool Lime Street first. Then you’ll take another train to Wigan North Western station, and from there you can either walk for 30 minutes or get on the local bus.

There are about 2,000 car parking spaces available at the football ground in Wigan. Even though it sounds like a lot, those spaces quickly fill out during the most important fixtures. However, there is always a solution. The approximate matchday paid parking price near the sports venue in Wigan is 4$.

Wigan is not exactly the world-known town of culinary delights. In fact, there are some decent venues for gourmets and some lovely cafes with very affordable prices and great service. The most popular cuisine you can enjoy at the local eateries is certainly British cuisine. Indian, Chinese, and Italian food is also among the top picks of the locals.

Although the ground is quite new and hosts both Wigan Athletic football club and Wigan Warriors rugby league club, there are no tours available at the venue. Also, none of the clubs has a museum at the present moment.

The arena in Wigan has twelve flexible meeting rooms. They are big enough to host up to 500 people. Wedding ceremonies, holiday parties, book launches, art exhibitions, IT conferences and a number of other great events take place there.

The Tics have two fan stores in the town and certainly an online club shop. The largest offline shop is located in Grand Arcade Shopping Centre about 2.3 miles from the arena. There is also a Club Shop which can be found right at the DW Stadium. It’s usually open 3 hours before the starting whistle on the matchdays.

Things to do in Wigan

Old collieries and mills, Leeds-Liverpool Canal, majestic steam engines of Wigan are the signs of a glorious epoch of Industrial Revolution. The town is still proud of its past but life has changed a lot in Wigan. On the other hand, the town can boast about the beauty of the ancient woods and the nature reserve surrounding it. No matter whether you prefer the industrial museums or the lovely things like the miniature railway in the woodlands, Wigan has something thrilling for your heart and soul.

Haigh Woodland Park – is a number one spot to see in Wigan. It’s an incredibly large park zone with wonderful playground areas for kids, high ropes, a golf course, exciting 20-minute miniature railway rides, craft studios, and a number of other healthy and fun outdoor activities for the whole family. It’s a perfect location where people can spend a great time and enjoy the true magic of our Mother Earth.

Lancashire Mining Museum at Astley Green – is a unique monument of the English coal mining history. It’s unexpected to see the world’s largest collection of colliery locomotives and restored gigantic 3,300 horsepower steam winding engine among the other odd artefacts of the twentieth century. What’s also puzzling, the object is run by volunteers.

Leeds-Liverpool Canal – this 250-year-old canal is a thrilling way to explore some of the best local attractions, while peacefully navigating the waterway. The epic Trencherfield Mill, the peaceful Wigan Flashes, the picturesque Wigan Pier, and even the DW Stadium are among the things you may observe from a new angle while enjoying the boat ride.