Built in 1923, Estadio de la Ceramica (previously El Madrigal) has turned into a legendary battlefield hosting Villarreal CF. The stadium depicts the club’s glorious history and is home of 25,000 of its dedicated supporters.
Contents: 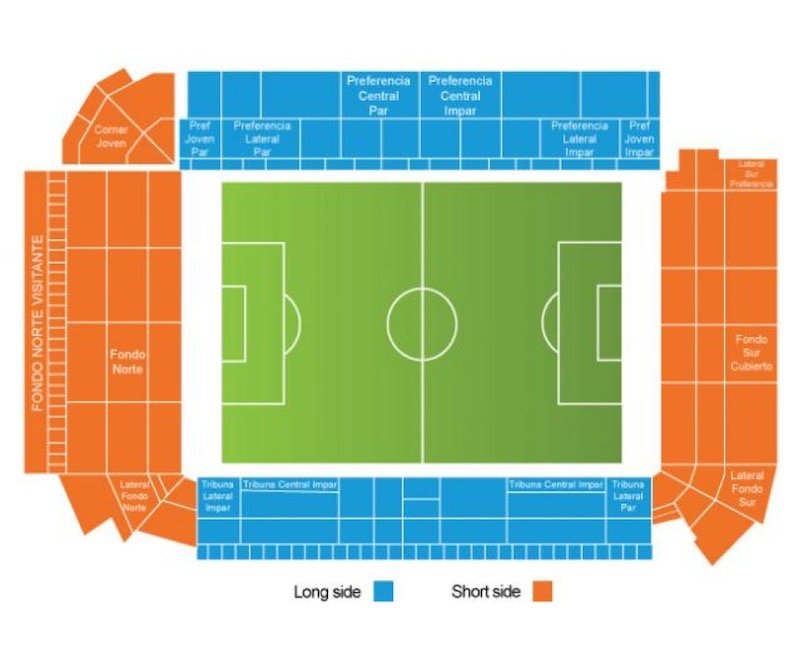 The stadium was opened on June 17, 1923, by a match between the Cervantes and Castellón. At the opening, it was called Campo del Villarreal. Two years later the stadium was named El Madrigal, and the current name Estadio de la Ceramica (El Madrigal) was awarded to the stadium after the reconstruction of 2017.

The first modernisation of the stadium took place in 1952. The field sizes were changed from 95 × 65 to 105 × 65 to meet the standards. In 1988, the stadium was reconstructed again. It gained its present appearance and opened with a match between Villarreal and Atletico Madrid.

Another reconstruction was completed by the 75th anniversary of the club. The VIP-box was installed at the southern platform. Some works also were completed at the north. Currently, there is a statue of a yellow submarine near the stadium. It honours Villarreal’s nickname.

The stadium has a rectangular shape. It consists of four sectors with different categories of seats:

The area with a ceramic coating appeared near the ground after the last reconstruction. This square offers a fantastic view of the stadium’s new facade. The ventilation and evacuation systems, as well as the other safety measures, have been significantly improved lately.

If you want to purchase tickets for a match of Villarreal FC or Spain national team at Estadio de la Ceramica, you can use Ticket Compare service. It is the fastest and the most reliable way to buy the tickets without any hustles. Choose the desired match, select the seats and securely pay online. It’s very simple!

Of course, you can also purchase tickets in other ways:

The prices for tickets vary depending on the tournament and the teams participating in the match. On average, you can expect the following ticket prices:

Villareal has quite a lot of interesting buildings popular among tourists. We both know you love to watch a good football match, but during the trip, you can also fall in love with this city’s amazing sights. Just make sure to take care of your accommodations in advance, especially since Villareal is not a big city. Booking.com always provides the best options for every traveller. You can stay near the stadium and enjoy attractive prices and the ability to book your hotel in a few seconds. I’ve collected some excellent hotel options, and you can check them below:

The stadium is located in the north of the small city of Villarreal in the largest province of Valencia called Castelló. The stadium is 4 miles south of the capital of the province Castelló de la Plana. The population of Villarreal is only about 50,000 people, so the city is really small. The nearest airport is in Valencia, 41 miles from the stadium. You can get to the stadium via transport as described below:

By Car – is the fastest way to get from the airport directly to the stadium. You can rent a car or take advantage of the taxi services. The taxi will cost around £71-98, and the road will take about an hour.

By Train – the train journey from Valencia to Villarreal also takes about an hour. The railway station is only a 10 minutes walk from the stadium. You need to take the train at the station València-Estació del Nord. The train number is C-6. The trains run every 20 minutes and cost £4-5.

By Bus – the journey from Valencia will take you about 50 minutes. Tickets cost £4-7. Take the bus at the Valencia – Carrer Clarianos stop. The buses depart every four hours.

While getting to the stadium in Villarreal is not a problem, finding the free park spot can easily turn your evening into a nightmare. However, there is always a solution. The approximate matchday paid parking price near the sports venue in Villarreal is £4.

Even though Villarreal is quite a small city, you can find many interesting restaurants and cafes in it. Spanish and Mediterranean cuisine, as well as local Catalan cuisine, will impress you. Some of the best food venues near the stadium in Villarreal are listed below.

Villarreal is a club with a long history and strong football traditions. It often plays in European competitions. If you want to get acquainted with the life and history of the club, you can visit special events at the stadium.

For all admirers of the club, Villarreal FC allows going on a tour of Estadio de la Ceramica and the Ciudad Deportiva training base. During the tour, you can see the locker rooms of teams, the pitch, the benches and VIP-boxes of the stadium. During the tour through the training base, everyone will be able to see how the players of the main team and youth prepare for the matches. For more information, you can call (+34) 964 500 250 or fill out the form at the official website.

The store is located at the corner between the main and southern stands. It works from Tuesday to Saturday and on matchdays. It boasts a complete catalogue of Villarreal CF clothing, as well as posters, flags, scarves, souvenirs and other items for the Yellow Submarine’s fans.

Things to do in Villarreal

Villarreal is located north of Valencia on the banks of the river Mijares. The Mediterranean type of local climate features mild winters and hot summers. Villarreal can offer a lot of thrilling things despite its provinciality. There are beautiful beaches nearby, so you can combine the exploration of historical artefacts and cosy old streets with swimming in the Mediterranean Sea during the season.

Ermita de la Virgen de Gracia – this building is a typical representative of the Mediterranean style of architecture. In this museum, you can find some amazing collections of medieval ceramic tiles, the hall of ethnology and the hall of archaeology.

Església de Sant Jaume – is a monumental church, the largest of its kind in Spain. It’s dedicated to the Apostle St. James, the former patron of the city. This building was built between 1752 and 1779.

Convento del Carmen – today, the influence of Franciscan culture in Villarreal can be seen in a beautiful monastery built in the mid-17th century. It’s a unique piece of architecture with some great frescoes and other decorations.