Built in 2013, San Mames Stadium has turned into a legendary battlefield hosting Athletic Bilbao. The ground depicts the club’s glorious history and is home of 53,289 of its dedicated supporters.
Contents: 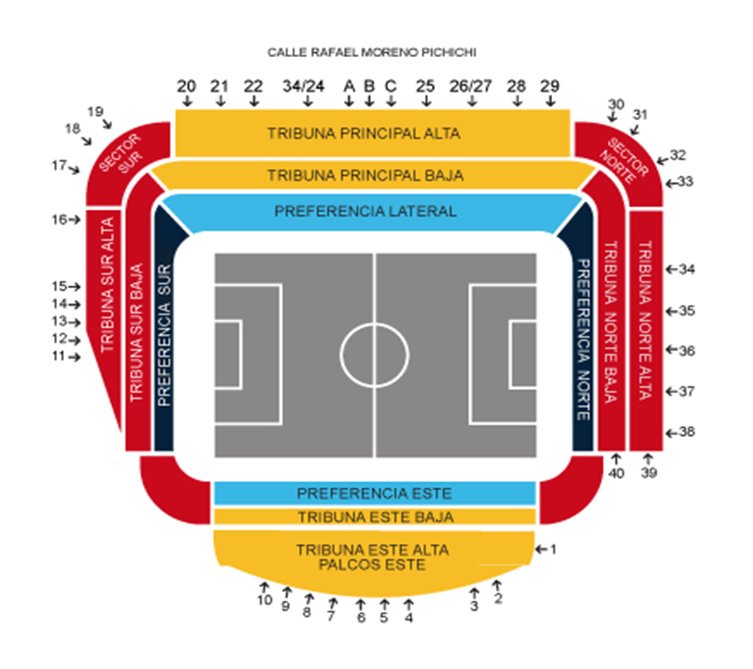 Nuevo San Mamés or the New San Mames Stadium has been built adjacent the ‘old’ San Mames in Bilbao. The construction process was launched in 2010 and in 2013 the stadium was partly completed and hosted its first game ever. Athletic Club defeated Celta Vigo, 3-2 in a dramatic La Liga match. Soon enough the old venue was demolished clearing space which allowed to complete the missing part of the new stadium. On 25 August 2014, the remaining end of San Mames Stadium had been finally completed. However, two years later, Athletic Club was forced to add massive extensions to the ground’s innovative roof. It turned out the roof was barely protecting the seats from Bilbao’s frequent rains. The roof extension project turned out to be quite pricey – $14 million have been spent to fix the original error.

Bilbao’s football venue is often compared with the Allianz Arena in Munich due to its external sophisticated lighting system. Among the other cool things, La Cathedral features a massive external video screen.

The categories of seats at San Mames Stadium are as follows:

The ultra-modern sports venue in Bilbao sells out its best tickets quite often, especially when Real Madrid, Barcelona, and Athletic Club’s rivals arrive at the stadium. Booking your tickets in advance is always a great idea, especially if you want to get the best seats at a reasonable price. It’s especially vital when it comes to the one-of-a-kind events, such as Euro 2020 Championships. Ticket Compare is a handy timesaving solution loved by thousands of football fans worldwide. The service has a simple interface, advanced navigation, and many other user-friendly features. However, if you want to buy your tickets for the match at San Mames Stadium you may also use alternative ways to implement this task:

In case you didn’t know, Bilbao won the title of the 2018 European City of the Year. But of course, it’s only one of many reasons to visit this amazing city. Booking.com is the only site you need to know whenever you want to book accommodations in this lovely Spanish city. You can choose one of the hotels from my lists below or simply search for the other options using the site’s advanced search for the best results.

By Metro – the city only has two metro lines but both of them pass the venue. Whether you are wending your way from Casco Viejo (“old town”) or Bilbao’s railway station, the metro is a good choice of transport for you. San Mamés is the name of the metro station serving the stadium.

By Tram – just like Estadio San Mames, the gorgeous Guggenheim Museum is one of the most iconic places in Bilbao. Luckily for us, the two are connected by Euskotran. It’s a modern tram line running along the picturesque Nervión River.

By Car – traffic jams around the stadium on the matchday are easily predictable. Use your sat nav to find the quickest way to reach the venue. Its address is Rafael Moreno Pitxitxi, s/n, Bilbao, Spain, ZIP 48013.

By Plane – Bilbao Airport (BIO) is only 9 miles away from San Mames. The stadium can be easily reached within 15 minutes by taxi or 20 minutes by the special bus A3247 Aeropuerto-Bilbao.

General public car parking isn’t available at the ground of Athletic Club. However, there is always a solution. The approximate matchday paid parking price near the sports venue in Bilbao is 10$-11$.

There’s no disputing it – unique history of the city, its authentic food, and a number of restaurants competing one another make a powerful combination. In Bilbao, the locals have been making every effort to transform their city from the industrial hell into the alluring travel destination. Good food became one of Bilbao’s calling cards. So let’s talk about some of the best places to eat and drink in the Basque Country’s largest city.

The sports venue in Bilbao has plenty of amazing things to show off. La Cathedral offers stunning stadium tours and museum exhibitions at a reasonable price. It was also recognized as the world’s best sports building in 2015 at the World Architecture Festival. Ever since the day of its opening San Mames lures the football fans from all around the world to learn its exciting history and feel its philosophy.

The one-of-a-kind design of the football and architectural gem located almost in the heart of Bilbao attracts thousands of tourists every day. Stadium tours at San Mames have been recently launched and they certainly deserve the attention of every football fan coming to the largest city in the province of Biscay. The tour featuring standard program costs 16$ per adult and 6$ per child of the age between 6 and 14 years old. More details can be found at the Athletic Club’s official website.

An innovative Museum of the Athletic Club is the place suitable for the whole family. During the exhibition, you will learn many exciting stories about the club and one of the world’s most gorgeous stadiums. Fantastic interactive systems, video-walls, and a nice playroom are very entertaining; therefore no one will feel bored. You can visit the museum for 11$ but the 16$ “museum plus tour” package is definitely more recommended. The prices are subject to change so check the museum’s rates, contacts, and schedule here.

If you would like to purchase the Athletic Bilbao’s official kits, gifts, and other merchandise, it’s certainly convenient to visit the club’s online store and to enjoy numbers of their special deals. The members can even get 10% off on all non-discounted goods. If you prefer shopping offline, there are currently four official Athletic Shops in Bilbao. The addresses, timetable, and contacts can be found here.

Things to do in Bilbao

The largest city in Basque Country is a unique place which has not so many similarities with the other Spanish cities. Everyone loves calm beach resorts of Andalusia and Madrid’s noisy nightlife, but Bilbao offers something that you won’t encounter elsewhere. The local museums feature the patterns of the inimitable culture of Basques. Once-gritty shipbuilding and steelmaking town has turned into the city of contemporary arts, glorious theatres, and extravagant food venues.

If you are one of the bus tour lovers, I have great news. Bilbao offers excellent opportunities to discover the city’s secrets at your own pace in your language. The daily guided tours with convenient stops cost 18$ for adults and 9$ for kids. As usual, you can hop on and hop off wherever and whenever you feel like and enjoy amazing city views as much as you want.

Guggenheim Museum – when the city guides and commercials speak about one of the best contemporary art museums in the world they actually do not exaggerate. The chin-dropping metal structure of this museum is just the beginning. It’s definitely a must-see venue in Bilbao.

La Ribera Market – is also unique in its way. The city which only has 345 thousand inhabitants somehow boasts with the largest indoor food market in Europe. Endless food stands, trendy bars, live jazz music, and a number of other vivid actions are waiting for you there.

Casco Viejo – means “the old town”. It consists of the seven medieval streets and narrow alleys that will capture your heart. The area is packed with traditional Basque cafes, cosy plazas, churches, fountains, museums, and the lovely Arriaga Theatre.