Built in 2002, King Power Stadium has turned into a legendary battlefield hosting Leicester City F.C. The ground depicts the club’s glorious history and is home of 32,312 of its dedicated supporters.
Contents: 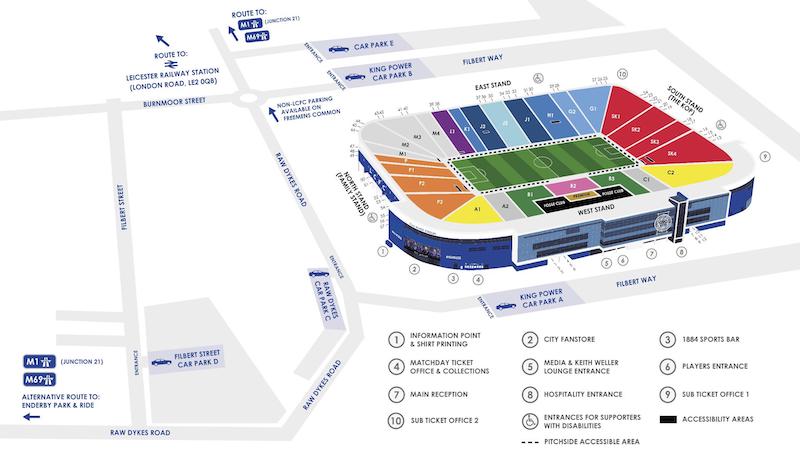 The home ground of Leicester City FC was opened in 2002. Despite the club’s relegation from the Premier League and £30 million debt, the Foxes managed to rise like a phoenix from the ashes very soon. Thai billionaire Vichai Raksriaksorn acquired Leicester City in 2010. Four years later, the Foxes promoted back to the Premier League. On May 7, 2016, they sensationally won the 2015–16 Premier League trophy. Following this earth-shattering success of Leicester, the club’s management drew up preliminary plans to expand the ground’s capacity, functionality, and comfort which should happen in the nearest future.

The East Stand and the West Stand of King Power Stadium are its longside stands. The shortside stands are North Stand (Family Stand) and South Stand (the Kop). All corners of the ground with the enclosed design are filled with convenient seats. The categories are listed below:

Due to the constantly rising popularity of Leicester City, fully packed King Power Stadium is a common thing to experience. Therefore, buying tickets in advance is highly recommended for the home matches of the Foxes. Ticket Compare is an excellent timesaving solution which will help you whenever you decide to buy tickets to watch football in Leicester. The prices are normally quite reasonable and the service is running like clockwork. If you want to try buying tickets at the official price, opt for the following ways:

All matches that take place at King Power Stadium are divided into two categories. Category A matchday tickets usually cost 40$-67$, while Category B matches are priced 35$-64$. The most expensive seats are located at the East Stand, while the cheapest ones are Family Stand seats.

There are so many reasons to visit Leicester that I don’t even know where to start. Amazing historical artefacts, plenty of outdoor activities, unique museums, and the urban art dedicated to Leicester City’s heroic achievements are definitely among them. Booking.com is the world’s best hotel aggregator which will allow you to quickly find the best deals in Leicester. Below you’ll find the list of the city’s best and most affordable hotels. Hopefully, this will help you to have a fantastic football trip.

Leicester is not an incredibly large city. The estimate of its population is 350,000. There are plenty of transport options, although if you stay in the city’s centre you can often walk to the ground. Most of the necessary objects of infrastructure can be also found in the area of Leicester’s historical centre. If you still need some transportation tips for your cosy stay in Leicester, here we go.

By Train – if you can handle a 25-minute walk from Leicester Railway station to King Power Stadium, I bet you’ll enjoy it. Of course, you can always take a bus or a cab to get from the station to the city’s main football ground.

By Car – a quick ride from Leicester’s centre at the eastern bank of the River Soar will bring you to the venue without any problems. Hopefully, you’ve got a satnav or Google maps in your smartphone. The stadium’s address is Filbert Way, Leicester, LE2 7FL.

By Plane – Leicester Airport is located only 5.8 miles away from King Power Stadium but it currently doesn’t operate public transport services. Therefore, the city is mostly served by Birmingham International and London Luton airports. They are linked with Leicester via trains and the road from each of these airports to the stadium can take from 1:40 to 2 hours. You can also fly at either Heathrow or Gatwick. They have direct buses to Leicester which are cheaper than trains. However, the bus trips are more time-consuming.

Visiting fans cannot park their cars at Leicester’s stadium due to the limit of spaces. However, there is always a solution. The approximate matchday paid parking price near the sports venue in Leicester is 5-15$.

Leicester is located in central England and has a rich history which influenced its culinary map. Gourmets will certainly have lots of mouth-watering dishes to try during their stay in this city. You’ll find a variety of options from raw food to beef cheeks, steaks, prawns, traditional English pies, and exclusive things like Peruvian coffee and Persian desserts.

The home of the Foxes is a relatively new football venue but it already boasts a rich history. There are enough interesting things to see there including guided tours and special events such as Legends Stadium Tour which usually features complimentary food in Blues Bar and Q&A sessions with the club’s legendary players.

In 2018, a new Foxes Fanstore was opened right next to King Power Stadium. It’s a very modern venue where you can find all sorts of great gifts and accessories related to the club. For more information about the opening hours, visit the official website. Speaking about Leicester City’s online shop, it’s also full of exclusive authentic products. You can find it here.

Things to do in Leicester

Today the city is known all around the world thanks the magnificent Premier League triumph which took place several ago. In fact, Leicester is worth a visit for a number of other reasons too. Incredible history, great transport connection with the other major cities including the English capital, cultural activities, festivals, natural beauty, and Leicester Market are among those things.

Visiting the old part of Leicester is fun all-year-round. While there are currently no classic double-decker bus tours available in the city, you can actually make your own walking tour in the compact city centre. However, you can always join the group and enjoy the museums and galleries of Leicester. Or you can take an inspiring Historical Tour of Leicester featuring the city’s valuable historical monuments and learn about its deep medieval history.

King Richard III Visitor Centre – is an incredible historical place and no trip to this city is complete without unravelling the story behind it. It’s delightful how this visitor centre allows everyone to travel back through ages and discover a large number of medieval mysteries.

National Space Centre – if astronomy, spacecraft, and distant galaxies are among your interests, you’ll definitely love the time spent in this wonderful museum. The planetarium often features shows dedicated to historical events such as Apollo landing anniversaries and takes the visitors to the virtual space journeys.

Abbey Park – located 10 mins’ walk from Leicester’s centre is a lovely riverside oasis. Prepare to see the remains of the twelfth century Leicester Abbey and the other chin-dropping ruins. You’ll also have a chance to rent a boat and enjoy calmness of the lake, have fun at the play area, and see the miniature railway.