Built in 2012, London Stadium has turned into a legendary battlefield hosting West Ham United F.C. The ground depicts the club’s glorious history and is home of 57,000 of its dedicated supporters.
Contents: 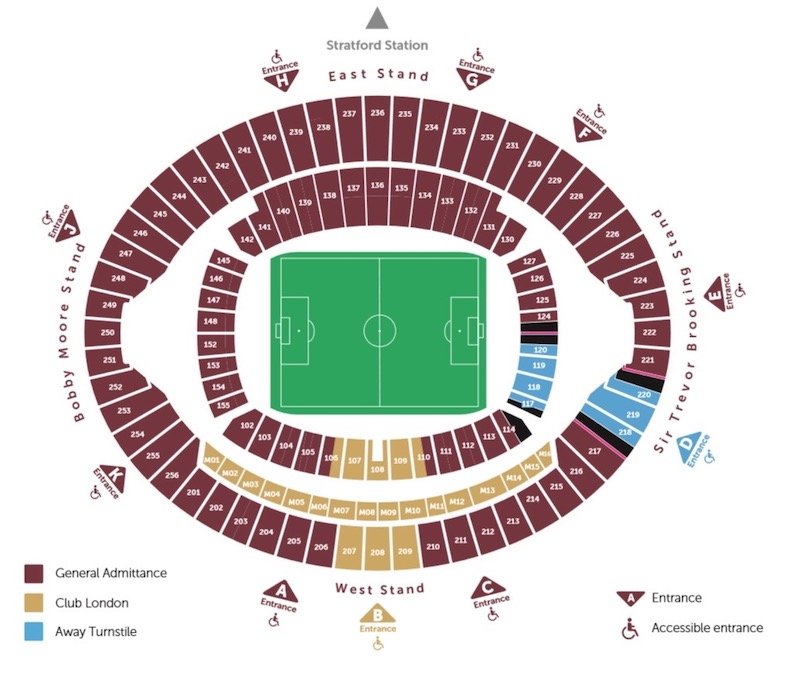 Built in the Stratford district of London to host 2012 Summer Olympics, it was originally named Olympic Stadium. After the Olympics and Paralympics, London Stadium was closed for planned renovations to become a multi-purpose arena. The world’s longest cantilevered roof, new corporate areas, concessions, bathrooms, and retractable seating had been installed during the reconfiguration. The stadium had also obtained UEFA ‘Category Four’ status. Since August 2016, London Stadium is a home arena to West Ham United F.C. and to UK Athletics.

The oval shape of London Stadium and relocatable seating potentially allows it to host even baseball, cricket, and other sports activities. The stands behind the goals are named after former players of West Ham – Bobby Moore and Trevor Brooking. The latter includes several upper and lower tier sections for the away team’s fans. The other two stands are East and West stands, and the first of them points to Stratford Station direction. The non-corporate ticket categories are as follows:

Keep in mind that the ticket prices for the UEFA Europa League, FA Cup, and the other cup matches may vary.

London Stadium hosted both the opening and closing ceremonies at the 2012 Olympic Games. Since its renovation finished in 2016, it also hosted several big concerts, including such of AC/DC, Depeche Mode, Guns ‘N Roses, Robbie Williams, Beyoncé, Jay-Z, and so on. The Rugby World Cup, the RFL Four Nations, and many other spectacular events also took place there. Relocatable seating allows London Stadium to welcome up to 80,000 attendees during the concerts. The record football game attendance of 56,988 fans was set on 23 September 2017. However, West Ham lost that game against Tottenham Hotspur, 2-3.

The most convenient way to purchase tickets to London Stadium without overpaying is Ticket Compare. It’s a real timesaver and indeed their navigation and a number of handy features make it very easy to get the tickets delivered fast to any country in the world.

It’s important to remember that the game status may cause quite a stir, especially if it’s one of London derbies, important FA Cup, or Europa League game. I suggest that you always buy tickets in advance, and there are a few other ways to get those desired tickets. They include:

Most commonly, the tickets go on general sale three weeks prior to the match. The pricing depends on the game status and the other factors. Here is an approximate price range for the home matches of West Ham:

London is one of the world’s best tourist destinations. No matter, whether you come to London for a big football game, for business, or just for leisure, Booking.com will help you to find the most suitable accommodations in just a few simple steps. Filter the properties by a number of characteristics and you’ll quickly find incredible deals in London’s best locations. Alternatively, you may simply choose one of my favorite London hotels listed below.

The capital of England has one of the best public transport networks in the world. Therefore, you shouldn’t have troubles getting to London Stadium. Stratford station is the recommended destination for those who are heading towards the arena. Once you get there before the match, you’ll have to walk for about thirteen minutes. There will be multiple signs and stewards to help you get there. Keep in mind, that the roads are closed to the traffic between that metro station and the arena for an hour before the starting whistle.

By Tube and Train – London Stadium is serviced by whopping 58 trains per hour through Stratford station. You can get nearly from anywhere in London to the arena using this type of transportation.

By Bus – over twenty bus lines are passing in close proximity to Stratford station. However, the best choices are bus lines 388, 308, 339, and D8. In case you need to get to Stratford at night, bus lines N8 and N86 operate 24 hours a day.

By Car – disrupted access roads during event days will hardly make it a pleasant ride. Therefore, it’s recommended to take advantage of the extensive public transport system servicing the area of London Stadium. If car is still your choice, keep in mind that the arena has no parking available. In fact, the nearest car parks can be found in Stratford International and Stratford Westfield.

By Plane – it will take you at least 1 hour 40 minutes to get from London Heathrow to London Stadium. You should take the Piccadilly Line to King’s Cross St Pancras. Then you’ll have a five-minute walk to St Pancras International station, where Southeastern service will bring you to Stratford International. Travel time from London Gatwick and Luton Airports is about 1 hour 20 minutes.

Parking in London is in general expensive. It’s also not the easiest task to find the vacant parking spot a few hours before the starting whistle. However, there is always a solution. The approximate matchday paid parking price near the sports venue in London is 7$.

London is a city with a huge number of restaurants and cafes representing cuisines from all over the world. For years, traditional food has been among the top reasons to visit the capital of Britain. Today one of the world’s most cosmopolitan cities can offer almost anything you want to eat, including trending Peruvian, and rare Afghani, Moroccan, Lebanese cuisines, and much more.

Spectacular tours allow fans to go behind the scenes at the epoch-making London Stadium. It’s an amazing feeling to touch history and to discover how the home of the London 2012 Olympics became the marvellous new home of the Hammers.

Several stadium tours are available at the arena of West Ham. You can see home dressing room, enthusiastically walk down the tunnel out onto the pitch, and enjoy London Stadium in its best from an angle of the modern football stars. The tour options include:

All tours, except the two-hour Legends Tour with Q&A session, last one hour. For more information about London Stadium tours, check the official website.

While you can always shop online on the official West Ham Store, obviously there is also a Stadium Store located next to the magnificent arena of West Ham. Each fan can choose from the widest range of Hammers-related items, such as the official kit, casual clothing, pet accessories, and even things like bedroom cushions and curtains.

Things to do in London

You could probably find a few big books on that issue because London is truly a magnificent city. No matter, whether it’s your first visit or you’ve been in the capital of England many times, there are always plenty of new things to discover. If you are looking for ideas to start exploring, think about the Southbank Centre, museums, exhibitions, theatres, parks, and places to drink your afternoon tea. London’s wild nightlife is another thing worth mentioning. The capital of Great Britain has some of the world’s most iconic nightclubs.

Hop on hop off sightseeing bus tours with over 60 stops on four different routes are among the most popular tourist attractions in London. A classic open-top double decker bus is the best choice for the summer day. In fact, any bus tour will be a perfect introduction and will allow you to explore London’s most sacral locations in no time. Night bus tours in London start from 28$. One-day bus tours start from 37$. The tours have many optional features available at an extra charge that will allow you to explore the attractions such as London Eye, Madame Tussauds museum, Tower of London, St Paul’s Cathedral, the London Dungeon, etc.

National Gallery – is a free must-see cultural experience in London. Spacey, monumental, and clean, it houses one of the world’s most incredible collections of art. The works of Monet, Da Vinci, Van Gogh and the other top artists from the 13th to the 19th centuries are presented in that beautiful gallery. It’s located in Trafalgar Square, right in the heart of the capital of England.

St. James’s Park – is a truly wonderful green oasis and the oldest Royal Park in London. It’s a unique calm place in a lively modern city which can relax you on your way to Buckingham Palace. The park’s lake is a wildlife sanctuary for myriads of ducks, swans, geese, and pelicans, which can be fed while you watch the spectacular London Eye going around.

Houses of Parliament – is a truly legendary building of the British government rebuilt in the mid-19th century. Part of it, which is known as Westminster Hall, dates from unbelievable 1097 AD. Houses of Parliament is the home of magnificent Big Ben. Even if you completely don’t care about politics, it’s still a unique architectural and historical spot, which can’t be skipped in London.