Built in 1897, Parc des Princes stadium has turned into a legendary battlefield hosting Paris Saint-Germain. The ground depicts the club’s glorious history and is home of 48,712 of its dedicated supporters.
Contents: 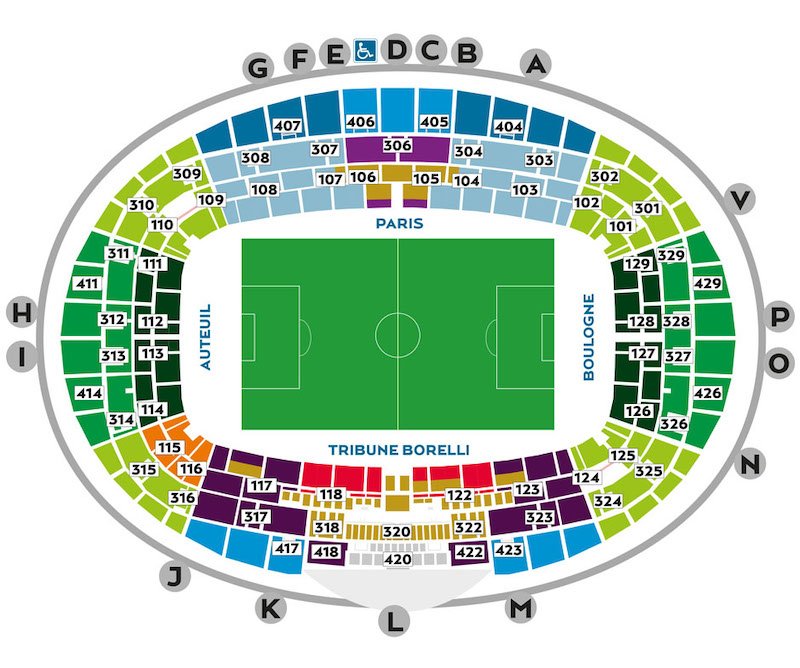 Parc de Princes was built in 1897 but the last major redevelopment took place in 1972. Back then, it had been one of the most modern venues in Europe. No wonder that Paris hosted so many important football matches in the 20th century. Among the most incredible features of the stadium are the 50 concrete columns supporting the monumental ring-shaped roof.

When Paris Saint-Germain was founded in 1973, Parc de Princes immediately became the new club’s home. Decades later, it remains a nice football venue and the fans of PSG regularly pack it creating a lovely atmosphere of the real football festival. In fact, the club’s owner is currently considering the idea of the stadium’s redevelopment. The number of PSG fans is constantly growing and Parc de Princes isn’t any longer the premium world-class venue it used to be forty-something years ago.

The categories of seats are listed below:

The stadium hosted quite a few European Cup finals and important international matches, including the battles of the Euro 1984, the World Cup 1998, and the Euro 2016 championships. Before 1998, when Stade de France was opened, Parc de Princes used to be the number one football venue in Paris. It’s not any longer the best stadium of the French capital but there is a potential to expand and upgrade it in the nearest future.

Buying tickets in a foreign country can be a quest – especially when it comes to a high-profile match. Keep in mind that PSG regularly sells out tickets. Therefore, it’s recommended to book them in advance. Ticket Compare is a perfect timesaving solution which can help you to buy tickets to any event at Parc de Princes much easier and often at a reasonable price. But if you do it in advance, the other ways to get tickets should be available. They include:

Tickets prices usually range from 39$ to 167$ depending on the location of the seat. Prices get increased when the game status is high.

In Paris, a traveller really has a countless number of accommodations to choose from. Booking.com will help you to find the best and the most convenient deal in no time. This service has proven its convenience and reliability so I always use it on my football trips. Below you’ll find the list with some of the nicest hotels near Parc des Princes.

The stadium is situated in the south-west of Paris, only about 6 miles from the city centre. Therefore, getting from anywhere in the French capital to Le Parc is quite easy and convenient. There are multiple transportation options you may use for this purpose.

By Metro – there are several metro lines that can bring you almost directly to Parc des Princes. Line 9 has the metro stop Porte de Saint-Cloud which is only minutes away from the ground. This line goes to Paris’ centre and has multiple connections with the other lines. At the same time, line 10 connects the venue with the south bank of the river Seine. The closest stop to the stadium on that line is Porte d’Auteuil.

By Bus – Porte de Saint-Cloud located approximately a 5-minute walk from Parc des Princes is also served by several bus lines. Among them are the lines 22, 62, and 72. If you want to get to Porte d’Auteuil, you should take one of the following bus lines: 32 or 52.

By Car – there are many ways how you can get to the stadium of PSG by car. The best scenario is to use SAT NAV or Google Maps and search for the ground’s address, which is 24, Rue du Commandant-Guilbaud, Paris, France.

By Plane – Paris is served by two main airports including Charles de Gaulle (CDG) and Orly (ORY). The first one is 17 miles away from the centre of the capital of France, while the second one is only 10 miles away from the centre. Both of them are conveniently connected with the heart of Paris, from where you can easily get to Parc des Princes by the transport options mentioned above.

It’s never easy to find a car park near the second largest football stadium in Paris, especially on an important game day. However, there is always a solution. The approximate matchday paid parking price near the sports venue in Paris is 24$ per 8 hours.

There are so many great eateries in Paris that you’ll be able to make lots of delicious discoveries during each day of your stay in the city. If you want to dive into Paris through food, I have some recommendations for you. Among the things that you must try are baguettes, French cheese, oysters, and falafel. For dessert try the local chocolate, salted butter caramel, eclairs, croissants, and macarons.

As was mentioned above, the home ground of PSG has a rich history and it hosted a great number of top-notch football events in the past. Parc des Princes has the potential to become the country’s best stadium in future if the club’s owners from Qatar invest their big money into the stadium. At the moment, there is not much to see at the stadium, except for the football battles, of course.

The football ground of Les Parisiens used to hearten their supporters and random tourists with the stadium tours costing only 11$. However, those tours are not being run any longer. Most probably, they will be launched again as soon as the stadium is upgraded.

Paris Saint-Germain’s shirt sales skyrocket each time the club signs another superstar. If you are one of the fans who urgently needs the beanie with PSG crest, socks, or anything in between you should definitely go to the club’s fan store. It’s located just near the ground and its name is Paris Saint-Germain Megastore. Alternatively, Boutique Officielle du PSG is located 5 miles from the ground at 27 Av. des Champs-Élysées. And of course, the foreign supporters of PSG would rather shop online at the club’s online store.

Things to do in Paris

If it’s your first time travelling to Paris, I hope you have booked enough days to experience this magnificent city in multiple ways. The options are almost unlimited so your must-see list will largely depend on what you are actually interested in. Paris has to offer numerous concerts, sports events, and shows, amazing museums, art galleries, architectural masterpieces, shopping spots, parks, gardens, and much more.

Bus tours are extremely popular in many European cities and, of course, Paris is no exception. While it’s certainly a fun way to explore countless places of interest in the French capital, there is something else the tourists often miss. Seine River hop-on hop-off cruises are just as affordable as the classic double-decker bus tours and they can be extremely fun. Romantic Seine River dinner cruises are also highly recommended.

Musee de l’Orangerie – is one of the finest museums in Paris with breath-taking murals. If you like impressionist art, don’t miss your chance to visit the museum’s basement. There you’ll find some of the most artistic works – the rare gems from the legendary masters including Monet.

Notre-Dame de Paris – is one of the symbols of the French capital and an incredible pattern of Gothic architecture. Enjoy the inspiring exterior and interior details, pray, and certainly walk up to the top of the Cathedral to see the bells.

Seine River – the river flows from east to west of the capital of France dividing the heart of Paris into two parts. Seine boat and yacht tours, therefore, give a different perspective and some new views of the city’s major attractions, such as romantic bridges, monuments, and the Eiffel Tower. Walking along the Seine River is also always a wonderful idea, especially at night.