Built in 1998, the Stade de France has turned into a legendary battlefield hosting the France national football team and the French rugby union team. The stadium depicts teams’ glorious histories and is home of 80,698 of their dedicated supporters.
Contents: 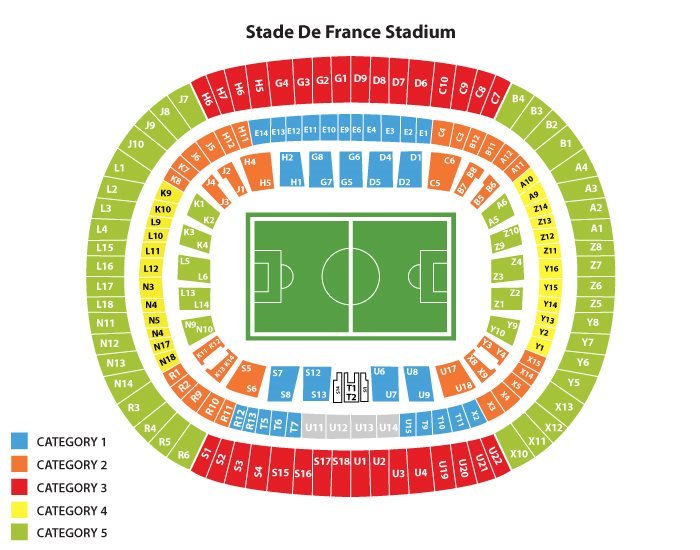 Welcome to the eighth-largest stadium in Europe! It is a terrific modern multipurpose arena where France national football team plays its home games. The stadium is also used for international track and field events, international rugby fixtures, rallycross, and some of the brightest concert shows in the world.

In 1992, the decision that France would host the 1998 FIFA World Cup was declared. As a result, the officials made a commitment to build an enormous stadium with every seat being covered. Grande Stade was the operating name of the venue used when the project was launched. The legendary French footballer Michel Platini was the person who proposed the name Stade de France and his idea was supported. The construction had been completed 4.5 months prior to the start of the World Cup. Zinedine Zidane scored the first goal at the Stade de France in a friendly game against Spain. That was the only goal scored on that night.

This incredible modular arena has three tiers. And wait until you hear this: the stands can move in bringing the fans closer to the action during football games and move out during track and field events.

The categories of seats are as follows:

Although the Stade de France arena is still quite new, it already hosted a number of important events. Since it was built for a specific reason to host the 1998 FIFA World Cup, it held nine matches of that competition including an unforgettable final when France defeated Brazil (3:0). Six 2003 FIFA Confederations Cup matches, seven 2007 Rugby World Cup matches, seven UEFA Euro 2016 matches, and two UEFA Champions League finals were also hosted by the Stade de France. And have I mentioned the concerts of Eminem, Madonna, Metallica, The Rolling Stones, Rihanna, and Beyoncé? Actually, much more superstars have already performed there.

So what about the tickets? If you want a carefree instrument to get those rare tickets to any event at the Stade de France, simply go to Ticket Compare. The arena is hosting various events and this site will allow you to book tickets to any of them. Whenever the events like the French Cup Final, the 2024 Summer Olympics, the 2023 Rugby World Cup, track-and-field competitions, rallycross, or concerts take place there, Ticket Compare always can help.

Here are the other ways to buy tickets to the specific events hosted by the Stade de France:

The Stade de France hosts a huge number of sports and music events. Therefore, ticket prices are not fixed like at the majority of the football club stadiums. France national football team takes part in different competitions and the prices are individually set for the specific fixtures.

Paris is one of the world’s most magnificent cities luring millions of tourists and business people year after year. Statistically, only Beijing, Rome, and Shanghai have more hotels than the capital of France. Since the Stade de France is located in Saint-Denis, 6 miles from the city centre, you have options to stay closer to the major attraction or closer to the arena in Saint-Denis, the northern suburbs of Paris. Choose the location that works better for you and go to Booking.com which provides the best choice of accommodations and excellent prices. What’s also great about the Stade de France – there are several great hotels located right next to it!

When French authorities committed to constructing an epic multipurpose stadium that would host the 1998 FIFA World Cup, they insisted that the arena should be situated as close to the city centre as possible. As you can imagine, it was pretty hard to find a huge void in the heart of Paris. So the venue was built in Saint-Denis, which is anyway only 6.5 miles away from the Eiffel Tower. Today the stadium area is called ‘public transport destination’ by the authorities. This means that it’s easier to use public transport system than private transport to get to the ground.

By Train – arriving in Paris from another European city by train ensures you get probably the quickest possible access to the stadium. The international trains normally arrive at Gare du Nord (North Station). A twelve-minute train ride will bring you to the station known as La Plaine Stade de France. That’s one of the closest train stations to the arena located 0.4 miles away from it. If you are going from the centre of Paris to the stadium via Suburban Rail Network (RER B), you can also head to La Plaine Stade de France.

By Metro – line 13 of the Paris subway can bring you to St Denis Porte de Paris station. Its distance from the ground is also 0.4 miles. The metro in Paris is quite sophisticated but the best thing about it is that you’ll be able to get to almost any place in the French capital. The ticket price in Paris metro is 2$.

By Bus – there is no need to use this transportation method if you need to get to the Stade de France quickly. However, if you have plenty of time and you are not close to line 13 of the underground, you may want to see the city above the ground. The bus network is very well-developed in Paris and there are countless ways how you can get from different parts of the city to the stadium on the bus.

By Car – google search for the stadium’s address “ZAC du Cornillon Nord, Saint-Denis” or simply “Stade de France” in order to get directions for the car ride to the arena. The roads can get very busy so the standard directions can be useless, especially if you are in a hurry. It’s also recommended to book parking in advance. You can do this at the official website of the sports venue.

By Plane – Charles de Gaulle (CDG), Orly, and Beauvais are the airports serving Paris. CDG is the biggest of them and located 12 miles away from the Stade de France. The train ride from CDG to La Plaine Stade de France takes 29 minutes and you’ll have to walk for 8 minutes from there. Orly is 20 miles away from the ground and it’s located on the opposite southern suburbs of Paris. Take OrlyBus to the Denfert-Rochereau-Métro-RER station and switch to Denfert-Rochereau station. The train will soon bring you to La Plaine Stade. The overall expected time of travel from Orly to the Stade de France is about 1 hour. Considering Beauvais, it’s an airport used by budget airlines and you’ll have to spend about 1 hour 30 minutes in transport before you can get to the arena. First, you’ll have to take the regional train (TER) costing 8$. It will bring you to Gare du Nord (North Station) from where you can easily get to La Plaine Stade de France.

Stade de France is a marvellous construction with many car park options available. But if you haven’t reserved it in advance, at times you’ll find it a difficult task during the event when everyone else is also in need of the vacant park spots. However, there is always a solution. The approximate matchday paid parking price near the sports venue in Saint-Denis is 8$.

Paris is a great city for foodies and certainly, there are some decent places to eat in Saint-Denis and especially in the area of the stadium. No matter whether you are looking for cheap street food or one-of-a-kind dining experience, I’ve certainly got some good hints for you.

Besides a number of bright events that take place at the biggest sports and concert venue in France, it also offers an exciting tour program at the most reasonable price. Your ticket also provides an opportunity to visit the stadium’s museum free of charge. You can do it either before or right after experiencing the guided tour.

So what exactly should you expect during the tour and is it worth paying 17$ or 11$ if your age is between 5 and 18? I’m pretty sure it does. It takes about 90 minutes to experience it. The route is predetermined and among the enjoyable things to see, are fun places like the changing rooms, the zone alongside the pitch, and even the security room. Make sure you check the schedule in advance at the official website of the arena. The tours provided in the English language are less frequent comparing to French, therefore pay attention at this aspect if you don’t know French well.

The Stade de France’s history springs from 1995 when the first documents had been signed by the local authorities. The stadium’s museum will help you to trace the construction process and the whole timeline of sports and music events hosted by this gigantic venue. Every football fanatic from anywhere in the world will find a lot of exciting artefacts, such as jerseys, gifts, surprising photos and videos, and much more.

The official online ‘boutique’ of Les Bleus provides Nike football kits, tracksuits, jackets, pyjamas, and tons of other great stuff. A customized France jersey is among the best gift ideas for a real French football fan. No matter what you want to buy, they deliver it to over 60 countries! However, there was no offline fan store near the Stade de France at the time of writing.

Things to do in Paris

There are so many things to see and experience in the capital of France that I’m nearly afraid to start writing this block fearing to miss something important. Anyway, I would start with the classic places like the Louvre, Musée d’Orsay, and smaller museums, e.g. the Musée Rodin, its luminous villa, and the pretty garden. Depending on your interests and hobbies you can find your type of museums focusing on things like money, wine, romance, fashion, art, and much more. Notre-Dame de Paris and Palace of Versailles, Eiffel Tower and Arc de Triomphe… Even kids from the distant countries often recognize the images of those gems. However, don’t attempt to see every “must see” attraction. It’s better to relax and take your time to soak up the spirit of Paris at your own pace.

There are countless ways to explore Paris and if you only have a day or two, bus city tours are cheap enough and convenient as usual. The standard double-decker bus ride can be as cheap as 13$. It will allow you to catch sight of the greatest Paris attractions in no time! The other options to consider are Seine River cruises, including lunch cruises, private night city tours, Eiffel Tower lunch with priority access, and various combined tours for small groups.

Atelier des Lumières – is a very unusual installation that can immerse you into a fantastic world of modern art. This fabulous place is loved by adults and kids because it’s very modern and absolutely mind-blowing. They use the latest technologies, combinations of music, video projections, and lights. You will certainly enjoy becoming part of their art installation.

Luxembourg Gardens – before the French Revolution only the king and his family could visit this magnificent garden. Today, every tourist can feel himself or herself a king or a queen in Paris. Romantic and relaxing atmosphere, the delightful architecture of the fountains, and pure nature is a perfect cocktail for a couple-hour big city getaway.

Louvre Museum – you might have already heard two or three times in your life about Leonardo da Vinci’s Mona Lisa. Well, actually, this museum is its home. If I tell you that the collection of the works of art presented in Louvre is remarkable and absolutely stunning, this won’t be even enough. Some people even say it’s simply the best museum in the world. Well, probably they are right!