Built in 1924, Selhurst Park stadium has turned into a legendary battlefield hosting Crystal Palace F.C. The ground depicts the club’s glorious history and is home of 26,047 of its dedicated supporters.
Contents: 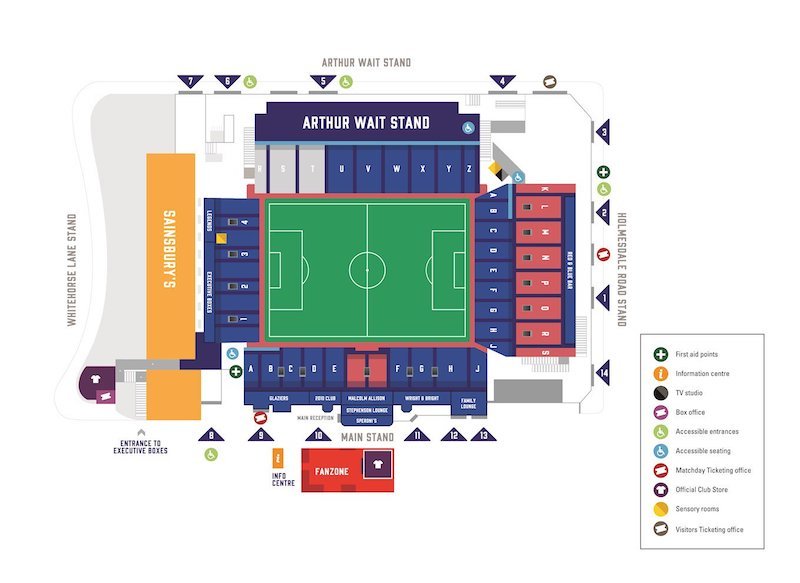 The story of Selhurst Park started in 1924 when the ground designed by a world-famous architect Archibald Leitch was completed. It immediately became the home stadium of Crystal Palace. The venue faced numerous ups and downs of the club. Many changes to the stands, the roof, and the pitch had been made in 1969, 1983, and 1994, with the latest renovation taking place in 2014.

Today, Selhurst Park boasts with one of the most striking atmospheres in Britain. Of course, there are many stadiums with a larger number of seats, brighter décor, and larger LED screens. But not so many football venues in the world are regularly 98% full.

Speaking about Selhurst Park’s shape, it’s a classic British stadium with four separate stands. Holmesdale Road Stand and Whitehorse Lane Stand are the ones located behind the goals. Arthur Wait Stand has the largest capacity of over 9,500 seats. The away supporters have several sections there. On the opposite side, there is the Main Stand. Crystal Palace F.C. has a serious plan to rebuild the Main Stand in the nearest future completely. It will allow increasing the ground’s capacity to 34,000 seats. It’s expected that the 32% capacity expansion should be prominent for the club’s finances and popularity.

The categories of seats are:

Since Crystal Palace’s home ground is often packed, I recommend you to secure your tickets in advance Ticket Compare can be your best helper with this. This ticket aggregator is a perfect timesaving solution which will help you to buy the best tickets to any game at Selhurst Park at a reasonable price. The service has an intuitive interface and other wonderful features.

There are more ways to get tickets:

The cheapest tickets for the matches at Selhurst Park cost about £26, while the most expensive Category 1 tickets cost about £39. The price goes about £10 higher when it comes to category A matches against top clubs.

Selhurst Park is located about 9 miles to the south from the central streets of London. When it comes to entertainment, Selhurst area is far from being perfect. Therefore, tourists might prefer to stay closer to the centre of London. But if you consider choosing accommodations close to the stadium of Crystal Palace, in overall, it’s a safe, green, and relatively clean area located just above the town. In any case, Booking.com is always at your service. It’s your assistant, which can help you to find the best hotel deals in South London. Below I’ll give you some recommendations.

The distance from Central London to Selhurst Park is about 9 miles. Considering that the British capital has a wide choice of public transport, it shouldn’t be difficult to reach the ground of Crystal Palace. The tips below must be helpful.

By Rail – Selhurst, Thornton Heath, and Norwood Junction are three stations where you can get off if you want to find yourself within walking distance from the sports ground of Crystal Palace. By the way, there is a confusing thing about another station in London. It’s called the Crystal Palace station, but you shouldn’t get off there. It’s located almost 2 miles away from the venue.

By Car – it can be hard to drive in the area near Selhurst Park before the kick-off. Certainly, public transport is a smarter choice. However, if you want to go to the match by car, it normally takes under an hour to reach the stadium from Central London.

By Plane – Luton Airport is 77 miles away from Selhurst Park. Therefore your best pick is London City Airport. The distance from there to the venue is 16 miles, and you can use Overground if you aren’t renting a car. Another decent choice is Gatwick. It will take you under an hour to drive from Gatwick Airport to the stadium of the Dragons in London.

Unfortunately, you can’t park your car at the ground of the Dragons in Selhurst. However, there is always a solution. The approximate matchday paid parking price near the sports venue in the London suburb of Selhurst is £5.

If you want to enjoy spending time in some of the world’s best pubs and restaurants, London is the right place to go. Unsurprisingly, those venues aren’t exactly situated in the suburb of the capital. But if you need to kill time or have a meal not far away from Selhurst Park, I’ll give you some good recommendations.

The stadium offers a range of opportunities for those interested in celebrations and enjoying special events in a unique setting. Christmas parties, weddings, birthdays, and corporate events can be garnished by Michelin level catering and the unique atmosphere of the football fest.

While there is nothing special about the stadium tour at Selhurst Park, according to the reviews on TripAdvisor, many people still like experiencing it. If you are one of the fans of the Dragons, you’ll like it. Right now, the tours rarely take place at the venue, and you should inquire about it here to get more information.

Crystal Palace F.C. owns the stadium in Selhurst and, of course, there is a fan store located directly onsite. It’s called Selhurst Park Club Shop, and it’s located near the Whitehorse Lane Stand. The Dragons’ official website is another opportunity to buy the club’s official merchandise.

Things to do in Selhurst

About 200 years ago, the area of Crystal Palace in South London was an oak forest. Today there are still plenty of places with relaxing woodland trails, thrilling hill-top views, and even the dinosaurs, which are luckily artificial. The local families love green zones. Selhurst is also known for its bustling ‘Triangle’ of independent eateries and shopping opportunities, including the stylish vintage market.

While there are so many opportunities to take the tour of any kind in Central London, including famous hop-on-hop-off double-decker, you can also have some fun during your stay in London’s suburb of Selhurst. For example, you can visit Horniman Aquarium or Dulwich Picture Gallery, which are both about 3 miles away from the stadium of Crystal Palace. If you are interested in local history, you can go to Brixton Windmill or Morden Hall Park.

Crystal Palace Transmitting Station – is a 719-feet tall broadcasting site which provides 12 million people with the TV signal. The spire doesn’t lure as many tourists as the Eifel Tower in Paris, but it’s not any less impressive. They have a limited amount of exclusive tours there.

Yuki’s Kitchen – is an enjoyable place to attend for every fan of Japanese food. The venue offers Japanese cooking classes which can be a fun way to spend an afternoon, try new Japanese dishes, learn a few things about the culture of Japan, and make new friends. So even if you don’t care much about ramen soup and fried gyoza, you should give it a try.

Crystal Palace Dinosaurs – is a free attraction which can be found in a huge park. The park itself and the sculptures of the dinosaurs need some maintenance. However, kids and parents love visiting this place. It’s a very calm and relaxing oasis with some pretty spectacular show-pieces. You can also find a paddleboat rental at the nearby lake.