Built in 2001, St. Mary’s Stadium has turned into a legendary battlefield hosting Southampton F.C. The ground depicts the club’s glorious history and is home of 32,384 of its dedicated supporters.
Contents: 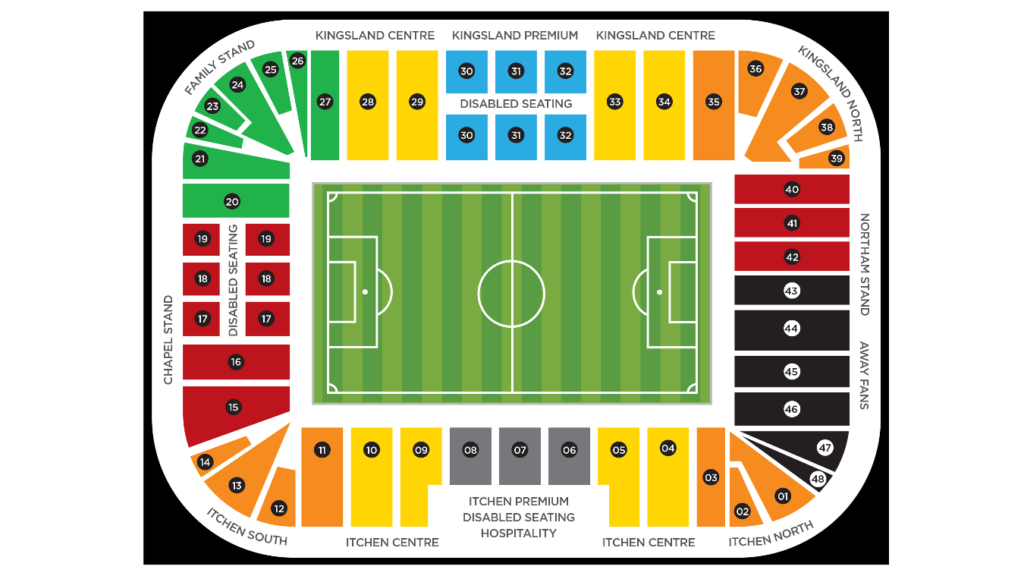 The year 2001 witnessed a historical event. Southampton FC which had played at the Dell for 103 years, moved to a brand new ground. Today it’s known as St. Mary’s Stadium. The fun part is that the club’s original name was St Marys Young Men’s Association since it was founded at St. Mary’s Church. Therefore, in a certain sense, Southampton FC returned to its roots.

This lovely stadium’s construction took place from 1999 to 2001. It is a completely enclosed football ground featuring the longside Kingsland and Itchen stands and the shortside Chapel and Northam stands. The corner areas are called Itchen South, Itchen North, Kingsland North, and Family Stand. The seats for the away fans are located at the Northam stand and Itchen North.

The categories of seats include:

All stands, excluding the Itchen stand, can be expanded in future increasing the stadium’s capacity to 50,000 seats in total. However, those plans are currently shelved because the tickets at St. Mary’s Stadium sell out not so often at the moment.

In general, buying tickets for the home matches of Southampton F.C. is quite hassle-free. In any case, the best seats always sell out quickly. Ticket Compare is a timesaving solution which can help you to get the best seats at St. Mary’s Stadium at a reasonable price. The service boasts with an intuitive interface, advanced navigation, international delivery, and a number of other great features.

However, you may also want to try buying Southampton home match tickets in other ways:

The ticket pricing at St. Mary’s Stadium is categorized like at the majority of the English stadiums. The tickets for the most anticipated matches are pricier and belong to the category A. The rest of the fixtures are known as category B matches and those tickets cost less. The prices usually range from 40$ to 69$.

Although I’m not a Sotonian myself it’s clear to me why the local people are so proud of their home city. There are many things that lure tourists to Southampton. Of course, football spectacles are among them. But no matter what’s your primary reason to visit the city of Titanic, Craig David, and Mayflower Theatre, Booking.com is your best assistant in finding the most amazing hotel deals. Below you’ll find a few tips and hopefully, you’ll book the accommodations of your dreams in Southampton.

Southampton is not a huge cosmopolitan centre. Therefore, getting around this city is quite easy and convenient. The stadium of the Saints is situated just east of Southampton’s central part near the docks. It’s close enough to the main shopping hubs and places of interest. For example, it is 20 minutes walking from Westquay Shopping Centre and 13 minutes walking from Solent Sky Museum.

By Bus – the bus lines Bluestar 7, 16, 18, and City Red X4 and X5 are relevant alternatives that may be used to reach St. Mary’s Stadium.

By Shuttle – this service functions only on matchdays starting 2.5 hours before the kick-off. The shuttles depart from the Town Quay Ferry Terminal and Southampton Central railway station.

By Car – Britannia Rd, Southampton, England SO14 5FP is St. Mary’s Stadium’s address. The roads around the ground are closed on gamedays. Use a smartphone and Google Maps to get the optimal directions.

By Train – the walk from Southampton Central railway station to the stadium takes half an hour. Of course, you can always take the bus Bluestar 18 or 7 to reach the ground more conveniently and faster. The bus ride and a short walk take about 20 minutes.

By Plane – Southampton Airport (SOU) is located only 4 miles from St. Mary’s Stadium. You can always take a cab or Uber for such a short ride but if you want to use public transport, consider taking a train to Southampton Central. They depart every 10 minutes and from there you can take the bus Bluestar 18 or 7.

Street parking options near the Saints’ football ground are limited. However, there is always a solution. The approximate matchday paid parking price near the sports venue in Southampton is 5-7$.

Southampton is also known as Europe’s cruise capital. Surely, the place with such a self-explanatory nickname should have a huge variety of foodie pit stops to satisfy each of four million tourists. That’s exactly the number of visitors Southampton attracts yearly. Below you’ll find top places to eat within walking distance from St. Mary’s Stadium.

The club’s stadium is a relatively new and very atmospheric venue. It offers great stadium tours at the most reasonable price. Unfortunately, Southampton F.C. has not got a museum. However, there is an excellent fan store at the ground.

The guided tour is an affordable and fun way to learn more about the club’s and football venue’s history. It also provides exclusive access to areas of the stadium which are normally unavailable for the football fans. Among such areas are the warm-up room, dressing room, and even the players’ tunnel. While the adult ticket costs 16$ and concessions ticket costs 8$, it’s possible to save a few dollars by purchasing a family ticket or use Saints season ticket to get a 50% discount.

You can find Saints Megastore directly at the football ground. However, if you are in Downtown, simply head to Westquay Shopping Centre and find The Saints Store. Lastly, you can always go online and order Southampton F.C. official merchandise here.

Things to do in Southampton

The city is known for its cruises, museums, parks, shopping centres, and certainly football club. Exploring the south coast of England you’ll find tons of thrilling things to do and to see. But below I’ll give you a few valuable tips to make sure you won’t miss the most exciting stuff while you are exploring Southampton and its neighbourhoods.

Hop-on bus tours are currently unavailable in Southampton. Although the city is relatively spacious and spread out, the Old Town is compact. You’ll find it easy and fun to walk around its most spectacular areas, wander around the green parks, and go shopping at the major regional malls and boutiques. Qualified city guides will gladly take you on a tour of the city’s medieval walls. At the Bargate, you can take a maritime waterfront tour which is also very amusing. Numerous boat tours such as Blue Funnel Cruises provide alternative opportunities to explore Southampton and the South Coast region. They feature 1-hour tours, full-day trips, and everything in between.

Solent Sky Museum – is the venue showcasing the history of local aviation. The aircraft development work which took place from the early 1900s to 1960s in Southampton’s area played an important role in world aviation history. The collection presented in this museum is also absolutely stunning.

Steamship Shieldhall – provides a one-of-a-kind experience in Southampton. Imagine yourself at the largest working steam ship in Great Britain! And wait for this – you can actually reserve it for a private birthday party, for example, and enjoy live jazz band, amazing food, and a well-stocked bar. If you don’t need a private tour, you can still enjoy this unforgettable steaming adventure with the other 200 passengers.

Stonehenge – is located only 33 miles away from Southampton. There are many ways how you can get from Southampton to Stonehenge including pre-cruise tours, bus excursions, and car rental option. The admission fee is quite expensive – 23$. But this iconic place is well worth it.