Built in 1922, Vicarage Road stadium has turned into a legendary battlefield hosting Watford F.C. The ground depicts the club’s glorious history and is home of 23,700 of its dedicated supporters.
Contents: 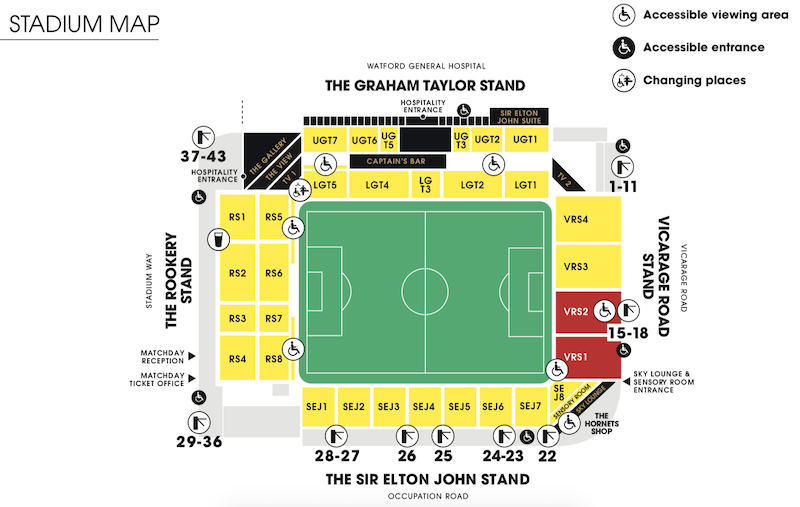 Vicarage Road is a classic four-sided stadium with open corners. Watford officially moved from Cassio Road to the new ground on 30 August 1922. Benskins Brewery had owned the arena for eighty years. In 2002, Watford purchased Vicarage Road Stadium but the club was forced to sell it back due to financial struggles. Finally, Watford re-purchased it again with the help of donations from fans. Sir Elton John, one of the most prominent club’s supporters and a former chairman, director, and president of Watford, played an important financial role in the deal. For example, in 2005 he held a concert at the Vic, donating the earnings to the club. Since September 2004, Watford F.C. is the sole owner of Vicarage Road.

Back in the early twentieth century, the Vic used to consist of two small covered stands and a few open terraces. The open terraces behind the goals have been replaced by the Vicarage Road Stand and the Rookery Stand in 1990’s. Thus, in 1993, the club constructed the Vicarage Road Stand, while the Rookery Stand was completed in 1995. The main stands are today known as the Graham Taylor Stand – the west side of the ground – and the Sir Elton John Stand at the east. The Graham Taylor Stand opened in 1996, while the Sir Elton John Stand was built in 2014. Currently the club is considering options to increase Vicarage Road Stadium’s capacity to 25,000 or even 30,000.

Unlike most English clubs, Watford doesn’t use ticket categorisation system. Therefore, the club normally doesn’t charge more for the seats with a better view. In fact, Watford rewards the most dedicated supporters allowing them to buy tickets for the most anticipated matches, and they usually get better seats.

Thus, the ticket categories are as follows:

My absolutely favourite way to buy tickets to Vicarage Road Stadium is Ticket Compare. It’s a highly trusted service owned by eBay. Its main advantage is the fact you can always rely on this service. They give us the possibility to instantly buy real tickets to any football game, even if the tickets are sold out or not available anywhere else. Ticket Compare’s navigation is simple so it’s very easy to sort the tickets by price, by row, and by section. The service also provides visually compelling seat map options, delivers tickets worldwide, and their gift card system is very convenient.

There are definitely more ways to buy those tickets. For example, you may use the following:

Most commonly, the tickets go on general sale three or four weeks prior to the match. The prices normally don’t depend on whether it’s the game against an underdog or against a top club. Here is an approximate price range for the home matches of Watford FC:

Although the club claims they don’t use ticket categorisation system, the Sir Elton John Stand and the upper Graham Taylor Stand seats tend to be 10-15% more expensive than all other options. Also, keep in mind that if Watford is unable to compromise with the opposition team, the tickets can get pricier.

Since Watford is located only a couple dozen kilometres of central London, you can definitely stay anywhere in the capital of England and go to Watford just for the game. If you are like me and prefer having accommodations within walking distance from the ground to avoid crowds and transport collapses, you won’t have many options in the town. However, Booking.com will help you to solve this issue. I certainly suggest you to book hotel in Watford in advance because they only have a few good ones near Vicarage Road. Another option is to check out one of the hotels from my personal top list.

Since Watford is a town located just outside of Central London, there are plenty of ways to get to the Vic from anywhere in the UK’s capital. In fact, if your hotel is located in Watford, it’s going to be even easier to get to the ground on time.

By Train – Watford High Street station is the best possible public transportation link you should be heading to. A walking time from that station to the arena is about 10 minutes. Another train station option for you is Watford Junction. In fact, it has a much better connection with Central London but you’ll have to walk for about 20 minutes from the station to Vicarage Road.

By Car – if you are driving from the North, go to the M25 and take Junction 20. You should follow signs for Hempstead Road into Watford, and then get on the A412 where you won’t be able to miss the Vic. If you are driving from the South, follow M25 until you’ve passed the M4/Heathrow exit and get off at Junction 18. Follow the A412 and look for signs for Vicarage Road that will lead you to the arena. In fact, it’s not fun to look for parking lots at the matchday. Some of the parking options in the area are located at Cassiobury Park Avenue, Watford Grammar School for Girls, and Fishers Industrial Estate.

By Plane – no matter whether you are landing in Gatwick, Heathrow, Stanstead or London City Airport, the best idea is to head to the centre of London. Then use directions from the Train section above.

It’s great to be a happy driver who has his own parking spot at the stadium. Unfortunately, it doesn’t often happen when you come to enjoy the away game of your favourite team. However, there is always a solution. The approximate matchday paid parking price near the sports venue in Watford is 7$.

As you probably know, London is among the world’s tastiest cities. In the capital of Britain, you can enjoy both traditional English cuisine and food of nearly any other known culture. Of course, Watford is only a small town but it still has some very decent places to eat out. If you are picky, I suggest you take time to get yourself to Central London. But for those of you who are looking for secret tasty spots in Watford before the kick-off or after the full-time whistle, I can share the list of my favourite eateries and bars in that town.

Like many other smaller football clubs, the Hornets still don’t have any stadium tours available to the public. However, they have a very nice fan store. Vicarage Road itself with its century-long history is a very special architectural object worth visiting and enjoying.

Unfortunately, Watford F.C. doesn’t have a club museum. Should I send a message to Elton John on Instagram and ask him why? Watford Museum is a local museum that has no connection with the football club. Approximately once a year, Watford Museum runs a special exhibition showcasing the heritage of Watford F.C. in the hearts of the local people. I’ve heard some very good reviews about that exhibition but obviously they were from the club’s fans.

The mobile pop-up Hornets Shops and the main Hornets Shop can be found on Vicarage Road. Rest assured they will get super crowded about an hour before the kick-off. If you need time to choose merchandise, go to the main shop at least a couple of hours prior to the starting whistle. Undoubtedly, you can also shop for Watford’s official merchandise online. I couldn’t imagine they even sell the things like the official Watford F.C. Monopoly these days!

Things to do in Watford

Watford is a peaceful town with a population of 90,000. Therefore, I cannot really say you’ll find hundreds of magnificent sightseeing in that town. Of course, if you get bored you can always jump in the train and find yourself in the heart of London in about half an hour. But in my opinion, Watford itself is also a pretty lovely place to spend a couple days at, especially if you’ve been to London quite a few times. One of such lovely calm places is Watford’s huge Cassiobury Park with ancient woodland. Another hidden gem is Cheslyn House & Gardens with a stunning garden, squirrels, and foxes. So if London is too noisy for you, chances you’ll find Watford even a better place for your heart and soul.

While London’s sightseeing bus tours are ultra-popular, Watford is a small town and those touristic open-top double decker buses don’t have routes there. But how about taking a tour to Warner Bros. Studio? If you’d like to investigate the behind-the-scenes mysteries of the Harry Potter movie saga, Warner Bros. Studio is less than 6 km away from Vicarage Road. Truly magical experience and awesome photo opportunities will make your trip to Watford unforgettable. Even without being a “real” Harry’s fan, I totally loved that experience!

Bentley Priory Museum – an important historical site where the Battle of Britain took place. I’m not exactly a big fan of war history museums but the building is even more fabulous than you can see it in the photos and the surroundings look totally magnificent and festive. They also have a café with a cute patio where you’ll love to sit, drink your tea, and reflect on a sunny day.

Bhaktivedanta Manor – is one of the most spiritual and peaceful places in Watford. It’s actually a temple with a nice garden, the lake full of fish and people praying, eating together, having yoga classes, and communicating. It’s a perfect spot for a lovely morning walk before the football game.

Watford Palace Theatre – is actually a great little theatre with two bars and an amazing show. The venue is quite popular these days. Since they don’t have many seats, don’t book it under the wire.