Built in 1897, Villa Park stadium has turned into a legendary battlefield hosting Aston Villa. The ground depicts the club’s glorious history and is home of 42,682 of its dedicated supporters.
Contents: 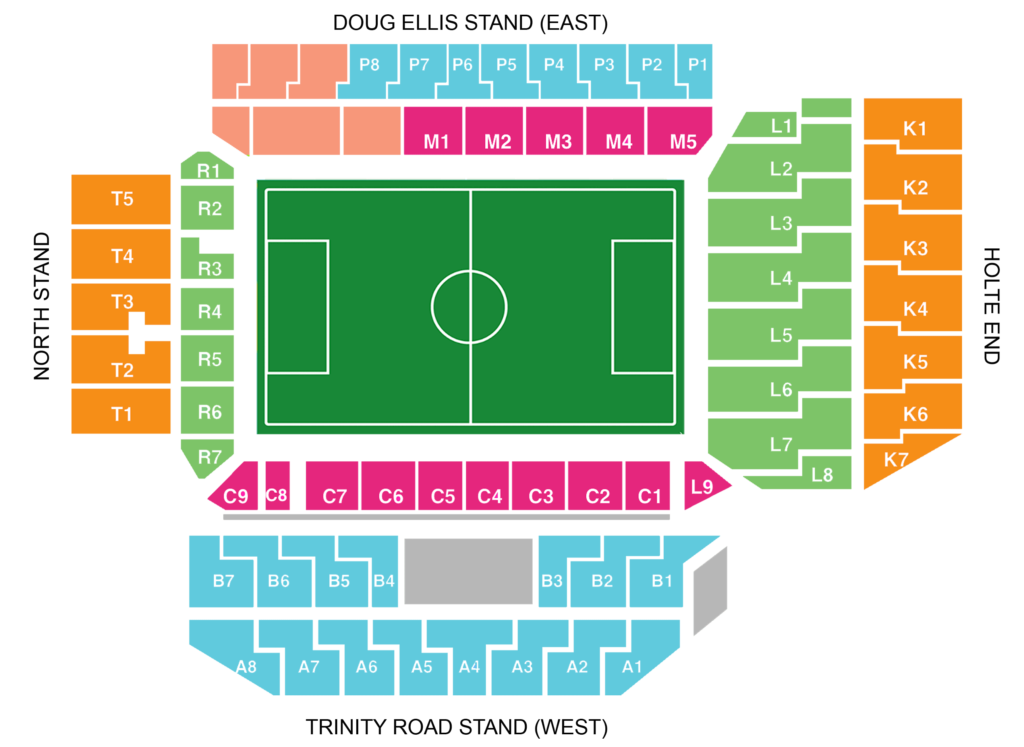 For over 120 years, Villa Park has been serving as the home stadium of Aston Villa. Going through numerous stages of redevelopment, the ground was becoming better and cosier each time. The army of the team’s dedicated supporters from all over the Midlands and beyond come to the stadium in large crowds.

The stadium’s seats are split between four stands: the Trinity Road Stand to the west, the Doug Ellis Stand to the east, the North Stand behind the northern goal and the Holte End behind the southern goal where the hardcore Villa fans sit. Trinity Road Stand is currently the only three-tier stand at Villa Park. Its other stands only have two tiers. Here is a quick run-down of the categories of seats present at the stadium (from the most expensive to the cheapest ones):

The record attendance at Villa Park was 76,588 in 1946. However, after reconstructions and conversion to the all-seater, the stadium only has 42,682 seats. In the nearest future, the venue should increase its capacity to 50 000 and the club has already obtained initial planning permission to upgrade the North Stand.

The supporters of Aston Villa are among the most dedicated fans in England. At times, it’s really hard to purchase the tickets for the match of the Villans. My personal lifehack is Ticket Compare. I often use this solution when I want to visit the highly anticipated football match. Although this option is more expensive than the traditional ticket purchasing, Aston Villa tickets are usually reasonably priced at Ticket Compare. Another great thing is that they deliver the tickets to any address and even abroad. Also, whenever Villa Park hosts the events like concerts, boxing, and rugby competitions such as the 2022 Commonwealth Games, those tickets are also available at Ticket Compare.

More traditional ways to buy tickets to the events at Villa Park include:

The tickets purchased at the official website and over the phone can be collected in Trinity Road kiosk two hours and less before the kick-off. The regular football game ticket prices at Villa Village currently range from £21 to £59 but are subject to change.

If you are starting to plan your next trip to Birmingham, you should take a look at the deals available at Booking.com. This is the world’s best hotel aggregator and it works just great in England. No matter whether you are looking for the cheapest accommodation or for the idyllic luxury hotel, Booking.com will help you to find what you need. I’ve got some great experience in planning my own football trips. Therefore, I want to share some hotel ideas near Villa Park with you.

Villa Park is situated only a couple miles to the north of the city centre. Of course, many of you will choose to stay in downtown to explore the city attractions and to chill in the restaurants. Therefore, you’ll need to get yourself to the sports venue a couple of hours before the starting whistle blows. Here are the instructions valuable for every football traveller in Birmingham.

By Train – this is the easiest way to get to Villa Park quickly from downtown. The trains depart from Birmingham New Street. A ten-minute ride will help you get to Witton Station which is located very close to the stadium.

By Bus – lines 7 and 11 can easily transfer you from the city centre directly to the sports venue. If you are going from Ashton University, take the bus line 65 or 67 and get off at Sandy Lane. You’ll then have to walk for about 15 minutes in the northwest direction.

By Car – if you are arriving from another city by car, take exit 6 at the M6 motorway and follow the signs for the A38. Turn right (A5127), and head to Villa Park using the corresponding signs.

By Plane – Birmingham International Airport (BHX) is located 13.5 miles from Villa Park, which is a short distance if you’ll rent a car at the airport. If you’ll use public transport to get there, it will take you about 40 minutes. Take the direct train from BHX to Birmingham New Street and then use the directions provided in “by train” chapter above.

Secure site parks are available at Villa Park. But the number of car park spots can be insufficient. However, there is always a solution. The approximate matchday paid parking price near the sports venue in Birmingham is £5.

In case you didn’t realise, Birmingham is the second-most populous city in the United Kingdom. It has plenty of modern and stylish British restaurants, traditional public houses, Asian eateries, and other notable places for foodies. The city is famous for its local dishes, such as Birmingham soup, Brummie bacon cakes, faggots and peas, etc.

Villa Park is an epic and cosy sports venue with some of the most dedicated fans. Visiting this stadium is always a great pleasure. The happy atmosphere of a real football fest, some awesome kid-friendly activities in the Family Fun zone, and plenty of food and drink options are always at your service. Exclusive stadium tours are among the other must-do things at the ground.

Standard Villa Park Tours are very affordable and cost £16 for adults and £10 for persons under 16 years old. Special tours with Sunday lunch are often available at the price of £38 for adults and £32 for youth. The tours should be booked in advance at the official website. Unfortunately, matchday tours are not available. Among the things you may enjoy during the excursion are the main team’s dressing room, interview room, the players’ lounge, the tunnel, and the other memorable places which will tell you a story about the most glorious days of the club.

If you have been to the stadium tour, keep your pass and on the same day, you’ll be eligible to get a 10% discount at the Villa Store. This fan store is situated just a few steps to the north from the stadium. Its address is Villa Park, Witton Ln, Birmingham, B6 6HE. Another great way to get a discount for the Aston Villa’s merchandise is to visit the official Villa Store website where they often have special deals cutting the prices up to 50% for the real fans.

Things to do in Birmingham

The soul of Birmingham has started with the Industrial Revolution becoming the forefront of scientific developments. Up until today, the city lures thousands of innovative and creative people from all over the world. The history and the modern cultural tendencies are imprinted in spectacular museums, churches and cathedrals, bright music halls, restaurants with unique traditions and architecture, as well as lovely trails, open spaces, and parks such as mysterious Tolkien Trail, Cannon Hill Park, and Kings Heath Park.

The city is proud of exciting tours that can be enjoyed by a traveller of any age. For example, Birmingham’s bus tours will help you to get acquainted with the city’s heritage. But those tours are quite similar in many other touristic places. A historic themed ghost tour is something absolutely unique you can experience in Birmingham. If you like to jangle your nerves, take this tour and learn lots of spooky things, hear the city’s legends, as well as dark and hidden episodes of its history.

Birmingham Back to Backs – is one of the top historical attractions of the city which will allow you to step back in time and go through different eras. The excursion gives a touching insight into how poor people used to survive in England in cold slums. This understanding helps to rearrange the things in one’s head and to realize how awesome modern life is.

National Motorcycle Museum – displays hundreds of amazing fully restored British bikes. It’s used as a venue for conferences and banquets among the other things. All bike-lovers must attend this place without exception.

Birmingham Museum & Art Gallery – if you like observing the collections of masterpieces, this one is truly magnificent. From the dinosaurs and ancient mummies of Egypt to the local art marvels – everything is totally great about this place.