Built in 1937, De Kuip stadium has turned into a legendary battlefield hosting Feyenoord Rotterdam. The ground depicts the club’s glorious history and is home of 51,117 of its dedicated supporters.
Contents: 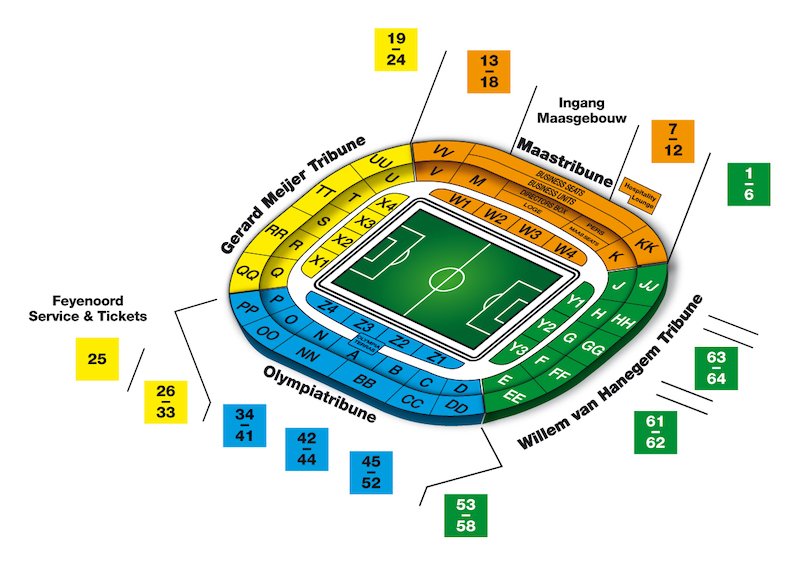 The second-largest stadium in the Netherlands is De Kuip. It consists of the steel support structure, glass, and concrete. At the time of its construction, it was a truly incredible piece of architecture. It inspired the other architects to create some epic football grounds throughout Europe, including the Nou Camp.

Feyenoord has been the only club playing its home fixtures at De Kuip Stadium since 1937. During World War II, the venue sustained heavy damage. When the war was over, it was quickly repaired and continued to host many important events.

The shape of De Kuip Stadium is the bowl. The Maastribune and Olympiatribune are located along the long sides of the venue. The Willem van Hanegem and Gerard Meijer Tribune are those that can be found behind the goals. The seating categories at the arena correspond with the names of the stands. VIP seats are mostly concentrated at the second tier of the Maastribune.

In 1994 and 1999, De Kuip Stadium was thoroughly renovated. In 2000, it hosted three group matches of Euro-2000, the quarter-finals, and the final. That is, by far, the most important page of the stadium’s history. The ground also hosted several epic concerts and over 150 international matches featuring the country’s main team.

Rotterdam is a great football destination. The local fans often fill De Kuip stadium, so the best seats rarely remain unoccupied. Ticket Compare is the online service which can help you to get the tickets in advance. You can use it as a reliable timesaving ticket solution. It features an intuitive interface, advanced navigation, and other convenient options.

You can also buy tickets to the events taking place at De Kuip stadium using the next alternatives:

In general, the football tickets in Rotterdam are affordable, considering the overall price level in the Netherlands. You can expect to pay from £17 to £45 for the Dutch league or cup fixture.

Rotterdam is full of wonders, and it’s recommended to reserve at least a few days for exploration of this city. Booking.com is always happy to help you with rooms and hotels at the most reasonable price. Below you can read more about some of the greatest accommodations that Rotterdam has to offer.

Getting around Rotterdam is easy, safe, and convenient. Although De Kuip is located several miles away from the city’s centre, you can always use the metro, tram, bus, or a combination of these transport systems. At some point during your stay in the city, you should also take a water bus and rent a bike to see the streets of the old city like a local citizen. Below you’ll find the best tips which will help you to get to the city’s main football ground in no time.

By Tube – Rotterdam Rijnhaven and Maashaven (metro lines D and E) are the closest underground stations. The walking distance from any of them to the sports ground is about 30 minutes. If you don’t want to walk, you can always take a tram or a bus from these stations.

By Tram – on matchdays, you can use the tram for free on your way to the stadium. The only requirement is that you must have a ticket with you. The tram lines 12 and 23 are equally great options.

By Bus – there are several buses which stop in the area close to the Rotterdam’s main sports ground. Examples are the bus lines 32, 70, 75, 76, and so on.

By Car – enter the stadium’s address into your satnav: Van Zandvlietplein 1, 3077 AA Rotterdam, Netherlands. Take traffic jams into consideration because they are frequent on the matchdays.

By Plane – the shortest distance from De Kuip to Rotterdam The Hague Airport is 8.5 miles. The car ride can take 20-30 minutes or 40-60 minutes if you are going to use public transport.

There are no general public parking lots available directly at the stadium in Rotterdam. However, there is always a solution. The approximate matchday paid parking price near the sports venue is £4.

In overall, traditional Dutch food is a bit rustic. Typical Dutch breakfasts and lunches are very similar. All sorts of pastry and bread with toppings such as fruit syrups, strawberries, walnuts, local cheese, butter and powdered sugar are extremely popular. Cured fish is another common lunch choice in the Netherlands. Dinners often consist of mashed veggies and some meat. Luckily for the travellers, the modern food scene of Rotterdam has been seriously influenced by numerous immigrant groups. Below you’ll find several amazing food spots which you’ll be happy to visit.

De Kuip boasts with vivid pages of incredible football history. Numerous local and international battles featuring the top clubs and the Dutch national team took place there. Although the stadium is old, it was renovated in 1999 and has plenty of exciting things to reveal. De Kuip stadium tours and museum are the most popular attractions, which are both affordable and fun.

As an experienced football fan, you have probably enjoyed quite a few stadium tours before. It’s hard to say De Kuip’s stadium tour is unique. But you’ll have great time exploring restricted areas of the ground which hosted the Euro 2000 final. Guided tours are available in English, German, and obviously, Dutch. You should reserve the tour in advance here.

The Feyenoord Museum showcases the club’s most valuable trophies and artefacts. It’s a cosy and atmospheric place which is loved by the local fans. Visitation of this museum is part of the stadium tour program.

The main Feyenoord Fanshop is located at the south-east corner of the arena. However, there are three more Feyenoord fan shops in Rotterdam. Speaking about the online shoppers, they can get whatever they need at the club’s official website.

Things to do in Rotterdam

Rotterdam has so many great attractions that a weekend is a way too short to explore this vibrant Dutch city. It has some great parks and a botanical garden. But it’s mostly known because of its one-of-a-kind architecture, canals with numerous bridges, old churches, and some great museums, especially with Museum Boijmans Van Beuningen, which features superb art collections.

Numerous walking, boat, and bike tours are available in Rotterdam. However, if you are limited on time, you should start with a hop-on-hop-off bus tour. It will help you to get the overall impression and to find out at which places of interest you would like to spend more time during your stay in the city. The second great idea is to visit Splash Tours BV and to take one of their amazing boat tours. It will allow you to see the city from a new angle and it’s going to be a lifetime experience.

Euromast – offers incredible panoramic views of the Rotterdam cityscape. It’s a tower featuring a rotating glass elevator with a superb restaurant, luxury suites, and even a zipline. If you are a fan of wonderful city views and extreme sports, you should go there.

The Cube Houses – is a unique piece of modern architecture and a true calling card of the city. The Cube Houses rest upon a hexagon-shaped pylon. They are tilted at a 45-degree angle giving the finest views of the nearby area.

Markthal – is an epic covered market hall with some of the greatest restaurants, boutiques, and a supermarket. It boasts with the country’s biggest artwork decorating the ceiling of the marvellous 40-meter-high arch. It’s a very spectacular place and a must-see in Rotterdam.