Built in 1996, Johan Cruijff Arena has turned into a legendary battlefield hosting AFC Ajax. The stadium depicts the club’s glorious history and is home of 54,990 of its dedicated supporters.
Contents: 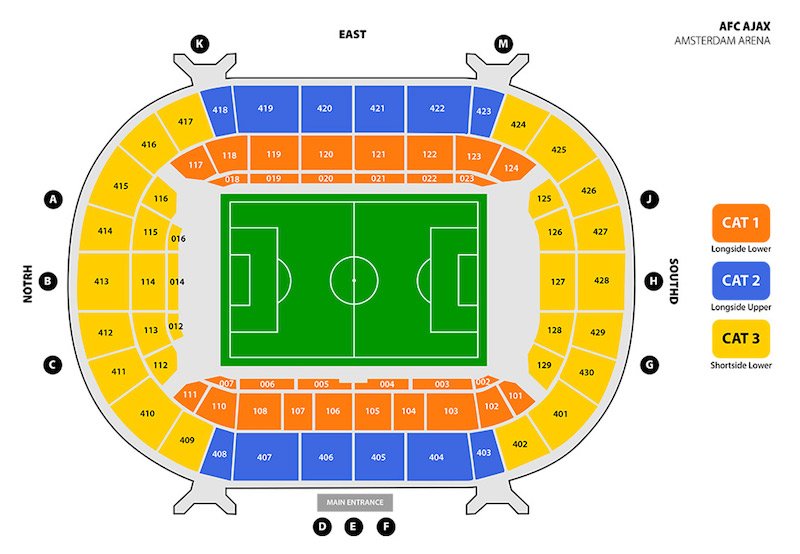 The construction of the Amsterdam Arena which is today known as the Johan Cruijff Arena lasted from 1993 to 1996. The plan to erect a new multi-purpose ground in the capital of the Netherlands has been discussed for a full decade prior to that. However various obstacles caused a delay in the progress.

The arena is often regarded as a breakthrough in stadium design and functioning. For example, it has become the first European ground with an innovative retractable roof. This fact alone allowed using Johan Cruijff Arena as an enormous music hall all-year-round. Some of the most prominent performers of the last decades lured millions of tourists to Amsterdam. David Bowie, Madonna, Michael Jackson, AC/DC, The Rolling Stones, Rihanna, and Coldplay are only a few among the artists who appeared on the stage of the Johan Cruijff Arena.

The cosy bowl-shaped stadium in Amsterdam has four stands named by compass direction (the East and West stands are the main ones, while the South and North stands are located behind the nets). The categories of seats are as listed below:

Amsterdam is one of the top tourist destinations in the world and the stadium of Ajax is among its valuable places of interest. Considering the 90.5% occupancy rate of the ground during the local matches, when truly important games are played, it’s extremely hard to buy tickets. Ticket Compare is the instrument which can help. It allows buying tickets to all sorts of events taking place at the Johan Cruijff Arena, including the unique events such as the matches of Euro 2020. This timesaving solution is ideal for purchasing tickets from abroad. The prices are usually reasonable but if you are looking for the cheapest ways to get tickets, try the following means:

As usual, the prices are subject to change but you can get the ticket to the random Eredivisie match for as cheap as 31$ or 34$ and up to 145$. The matches against Feyenoord, PSV, and the European games sell out much quicker and are priced higher.

Amsterdam is a teeny-tiny city compared to Rome, Berlin, Moscow and most of the other major European capitals. Therefore, almost all accommodations in the city can be considered “central” or very close to that. It’s a great thing to know before you start searching for your hotel at Booking.com. I always use this hotel aggregator myself and advise my friends to do it as well. With its help, I was able to find some of the most amazing hotel deals in Amsterdam.

As I’ve mentioned above, Amsterdam’s centre is very compact which is making it a very convenient city for the football fan who wants to be close to the stadium and to as many places of interest as possible. Understanding that not every person likes to walk a lot, I’ve put together a few transportation tips. Those should be great for the first-time traveller in the capital of the Netherlands.

By Metro – Bijlmer Arena Station is around a 5-minute walk away from the Johan Cruijff Arena. Use Metro 50 or 54 to get from Amsterdam’s centre to the football ground.

By Car – Arena Boulevard 1, 1101 AX Amsterdam, Netherlands is the stadium’s address. Search for this in google on your smartphone or sat nav to receive the up-to-date directions.

By Plane – Amsterdam Airport Schiphol (AMS) is located about 11 miles west of the Johan Cruijff Arena. While the car ride takes about 30 minutes on an average non-matchday evening, the traffic can get pretty intensive a few hours before the kick-off. The Intercity train will deliver you from the airport to the main stadium of the Netherlands within 18 minutes.

It’s been calculated that parking space for about 9,000 cars is available within short walking distance from the home ground of Ajax but it’s still less than the number of people who want to park on a gameday. However, there is always a solution. The approximate matchday paid parking price near the sports venue in Amsterdam is 8$-16$.

Amsterdam proudly offers many vivid culinary experiences so don’t hesitate to experiment in this culturally rich cosmopolitan city. While many travellers would only go to famous restaurants and fancy pubs, Amsterdam can surprise you with a number of totally awesome family-owned businesses and little street food kiosks. You’ll be amazed to see how they make culinary masterpieces out of nothing in a unique and creative way. Among the must-try meals in the Dutch capital are bitterballen (deep fried crispy meatballs), hot, fresh kibbeling (deep fried morsels of cod), stamppot (mashed potatoes with plenty of other veggies), and certainly freshly-baked stroopwafels.

Amsterdam’s main football ground is surrounded by lively streets with tons of enjoyable things to do and to see. Eating, chilling, shopping, and entertainment options are almost unlimited. The home of Ajax itself boasts of modern facilities and has a lot of amazing things to show off.

A thrilling 75-minute tour is a truly enjoyable experience which is highly recommended for every family member. It features the unique VR experience, players’ tunnel, press room, changing room, the Ajax Gallery of Fame, and many other things. The other available options are the Amsterdam Travelcard & Stadium Tour, VIP tour, Lovers Canal Cruise & Stadium Tour, Kidstour in the Dutch language, and the private Group Tour. For complete information please follow the link.

The main Official Ajax Fanshop is situated at the West stand of the ground and is easy to spot. There is the second location known as Ajax Fanshop Kalverstraat. Its address is Kalverstraat 124, 1012 PK, Amsterdam. It is 7 miles south-east of the Johan Cruijff Arena. Of course, the club’s gear, personalized gifts, and other fan items can be purchased online.

Things to do in Amsterdam

Beautiful and permissive, entertaining and romantic – Amsterdam constantly increases the number of experiences to attract more and more tourists. From the Keukenhof tulip gardens to the museum of liqueur and spirits, and from the Nemo Science Centre to the world’s most vibrant night clubs – Amsterdam has everything for everyone. Below you’ll find a few tips which will help you to get acquainted with some fun places in the Dutch capital.

City tours are ultra-popular in the magical city of Amsterdam. You can select anything from lovely dinner cruises along the city’s canals to charming flower-fields tours. You can explore the marvellous Dutch countryside with famous windmills or go to freezing Icebar on a hot day and enjoy a combined hop-on-hop-off bus and boat tour afterwards. In Amsterdam, there are always many things to do in any weather and even off-season from October to March when the hotel rates fall big-time.

Vondelpark – is the city’s main oasis with plenty of greenery, lovable ponds, live music events, cabaret, and a superb rose garden where impressive 70 types of roses grow. Pablo Picasso’s “Fish” sculpture is another notable object to observe there.

Houseboat Museum – there are many amazing canal cruises available in Amsterdam. Some of them feature cheerful guides, tasty treats, and additional attractions. However, many tourists don’t even realize what it is like to live on a houseboat. The Houseboat Museum provides the one-of-a-kind opportunity to explore the real houseboat and to hear its incredible first-hand history.

Museumplein – is a legendary square where outdoor events and celebrations practically never end. Amsterdam’s most prominent museums and a stunning concert hall are also located there. The Rijksmuseum, the Stedelijk Museum, and Van Gogh Museum are among the venues that shouldn’t be skipped.