Built in 1913, Philips Stadion has turned into a legendary battlefield hosting PSV. The stadium depicts the club’s glorious history and is home of 35,000 of its dedicated supporters.
Contents: 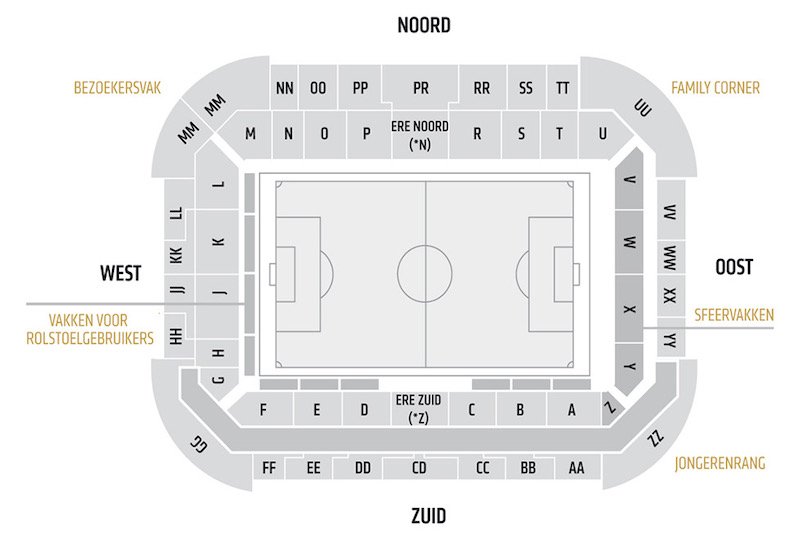 The history of the Philips Stadion is quite unusual because it was erected as a part of a sports park along with employee housing for the Philips factories located in the outlying district of Eindhoven. The growing population of Philipsdorp or “Philips Village” appreciated the appearance of the space for sports activities and leisure within walking distance from their dwellings. But who could have imagined how the venue would look like in the 21st century! The construction of Philips Sportpark was finished in 1910. PSV Eindhoven was founded in 1913 and has been occupying the ground ever since. Today it’s known as the Philips Stadion.

The modern shape of the ground is a bowl. The stands were named by compass direction – the West Stand and the Oost or East Stand for the ends, the Noord Stand and the Zuid or South Stand for the longsides. The categories of seats at the Philips Stadion are listed below:

After several renovations which happened during a century-long history of the venue in Eindhoven, the Philips Stadion became the third largest such construction in the Netherlands. The home grounds of Ajax and Feyenoord can certainly host more spectators but probably no other club in the country can boast with 95% stadium occupancy rate. The Philips Stadion has seen the victories of their club in the big European matches against Real Madrid, Barcelona, Manchester United, Arsenal, AS Monaco, AC Milan, Porto, and so on. It has hosted three important UEFA Euro 2000 group stage matches and the 2006 UEFA Cup final when Middlesbrough was humiliated by Sevilla (0-4). Live coverages of the Netherlands national football team matches and music concerts also take place at the venue.

Since the occupancy rate at the Philips Stadion is super high, it’s vital to take care of your tickets well before your trip to Eindhoven. Ticket Compare is a timesaving solution with a simple interface and advanced navigation which will help you to purchase your tickets in no time. The service can allow you to buy tickets from abroad and will never let you down. But as usual, there are more ways to get those tickets:

The prices may vary but they normally range from £25 to £56 for the regular matches and up to £134 for the matches against Ajax and Feyenoord.

Great football history, interesting museums, vibrant urban culture, and cheap Ryanair flights to Eindhoven are luring quite many people to this industrial Dutch city. Most travel planning starts with Booking.com. It is a number one hotel booking platform in the world which constantly improves and provides the best hotel deals nearly everywhere on this planet.

What used to be outskirts of Eindhoven 100 years ago is almost the heart of the city at the moment. Therefore, Eindhoven’s major attractions and its train station are all within comfortable walking distance from the Philips Stadion today. If walking is not your thing, further information will help you to explore the city in the most convenient way.

By Train – if you arrive in the city by train, the good news is that Eindhoven Centraal Station is a short walk away from the ground. Alternatively, you can catch one of the buses 401, 402, or 403 at the station. The ride takes less than 10 minutes.

By Car – the traffic can be limited on matchdays. Use sat nav and search for the stadium’s address to get the clear and valid directions. Its address is Frederiklaan 10a Eindhoven, 5616 NH, Netherlands.

By Plane – a 20-minute bus ride separates Eindhoven Airport (EIN) from PSV’s home ground. The bus line 401 links the airport with the city’s central train station. However, you don’t have to go all the way to the terminal point. The route has a bus stop just near the stadium.

The parking lot is located on level 3 of the Philips Stadion but it’s obviously not big enough to satisfy everyone’s need. However, there is always a solution. The approximate matchday paid parking price near the sports venue in Eindhoven is £5.

Eindhoven’s busy streets are full of kiosks and stalls with traditional Asian, Turkish, Mediterranean, French, and certainly local Dutch treats. For those who prefer eating out in a casual atmosphere, there is a number of excellent restaurants. The major shopping street located a short walk away from Eindhoven’s stadium is full of great pubs, bars, and cafes.

PSV’s rich history and unique development path of the Philips Stadion deserve the attention of every person interested in football. The century-old arena has a number of interesting things to show off. Among the most fun things to discover there are impressive stadium tours and the modern PSV museum. The venue is also capable of hosting conferences, private parties, and everything in between.

Each tour at the Philips Stadion includes the guided journey in the ground’s hidden areas such as the tunnel, dressing rooms, and even luxury boxes of the directors. The entry to the PSV Museum is also a part of the tour. The ticket costs £14 for adults. The groups are welcome to apply in advance and can get tickets at a reduced rate of £12, which is also the price of the children’s ticket. More details can be read here. You can also email the club’s officials to get more information tours@psv.nl.

PSV museum can be visited separately from the tour. Among the things to discover there are the Hall of Fame, unique collections of the club’s memorabilia, and some fabulous interactive experiences. The adult admission fee is £7 but for the group of at least 15 persons, the rate is reduced to £6. Children from 4 to 12 should pay £4. For more information visit the PSV official website or email museum@psv.nl.

PSV Fanstore is adjacent to the club’s museum and can be found at the Oost or East Stand of the ground. It’s open from 10 am to 6 pm Tuesday through Friday and from 10 am to 5 pm on Saturdays. PSV Fanstore gladly welcomes every supporter of the Red and Whites providing a wonderful choice of the club’s official merchandise and souvenirs. The online version of the PSV store is also functional and convenient.

Things to do in Eindhoven

Eindhoven’s history is largely linked with industrial growth and development of Philips which is today listed among the world’s leading electronics companies. Thus, some of the city’s attractions like the DAF Museum and the Philips Museum resonate with the industrial topic. However, Eindhoven’s modern buildings, stunning art exhibitions, and beautiful churches are also very impressive. Vincent Van Gogh lived near Eindhoven for two years and you’ll learn so much more about it after visiting the Vincentre.

If you want to learn about the major sights of Eindhoven in no time, the easiest thing to do is to visit one of the city’s tourist agencies or to download one of the self-guided walking tours such as the GPSmyCity App. The city’s centre is compact and you’ll be able to explore its places of interest on your own feet or with the help of the rented bike. The local agencies mostly specialize in delicious food tours and they usually cost from £44 per person.

Van Abbe Museum – is located one mile away from the Philips Stadion in a quaint and innovative building. Every person interested in modern art will absolutely love to see the works of Marc Chagall and Pablo Picasso, as well as the other 2,700 pieces of paintings, sculptures, and art installations.

The Philips Museum – is an ultramodern venue loved by adults and children for its unique digital experiences including interactive games, video puzzles, and so much more. Guided tours are available in English and will reveal you thousands of incredible facts about the path of the Philips Company to success.

PreHistorisch Dorp – is a prehistoric village recreated 2 miles south from the Philips Stadion. It’s a fun place to walk around the old trees among the replicas of the ancient homes with prehistoric instruments and small farms. This place is very child-friendly and features many exciting programs and workshops.