Spectacular football battles, worship of fans, bright victories, tragic defeats, and unbelievable comebacks—these arenas have seen it all. Some of them became home for years and decades to the world’s most successful football names. Some of them are home to small teams but they certainly have their own thrilling stories to tell. They have seen ecstasy and tears. They have heard thousands of referees’ whistles and hordes of roaring fans singing their teams’ anthems. Some of them have not yet become famous in every corner of the world but most of them are truly legendary. What unites them is their beauty. Of course, it comes in many forms. Therefore, this list of the most beautiful English football stadiums is subjective. If your favourite club’s ground is not there, no offence, my friends.

Get prepared to read about the top 10 most beautiful football arenas in England. The stage is set, the green flag drops. 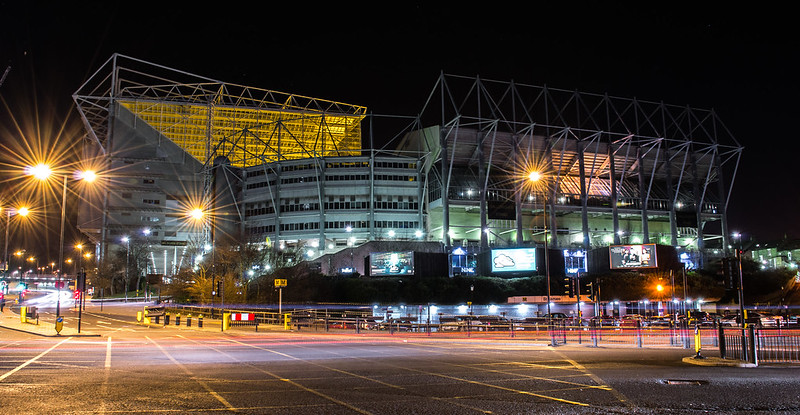 St James’ Park is a beautiful arena built in 1880. The first team to play there was Newcastle Rangers. On Christmas Eve, 1892, freshly-formed Newcastle United played their first match against Middlesbrough at St James’ Park. Since then, the ground witnessed a big number of events including unforgettable Euro ‘96 matches, the Rolling Stones concert, seven England football team’s international games, and even World War II victory parade. After several re-developments, St James’ became a real pearl of an amazing city, Newcastle upon Tyne. Today, it’s a very cosy and atmospheric stadium. The stylish cantilever roof is its calling card.

This legendary stadium was constructed in 1877 but it mainly served as an athletic ground for the next 28 years. Due to the increasing interest of the society in football, Stamford Bridge was rebuilt in 1905 to serve as a football ground. The reconstruction was headed by a talented architect Archibald Leitch who designed more than twenty iconic arenas in the UK and Ireland, including White Hart Lane, Goodison Park, Leeds Road, Highbury, and others. Originally, the stadium’s owners supposed that nearby Fulham F.C. would be interested to make it their home arena. In fact, Fulham rejected the proposal and newly-formed Chelsea F.C. moved in. The club has been calling Stamford Bridge their home ever since. It’s planned that Chelsea will build a new ground by 2021 but at least until then, Stamford Bridge gets its well-deserved place in the list of the most beautiful football venues in England.

Villa Park is yet another architectural masterpiece at the football map of England. It used to be part of a large pleasure ground in the late 1800s. In 1897, Aston Villa abandoned inferior Perry Barr stadium and found its new home at Villa Park. The venue had been transformed for multiple times throughout the glorious years of the club. The last reconstruction happened in 2000 when the legendary 1920s Trinity Road stand was replaced. Villa Park has an important historic value. It hosted World Cup, European Championship, a record number of FA Cup semi-finals, and a large number of outstanding European Cup matches. Wretched form of Aston Villa for the best part of the early 2000s is a real disappointment. The arena of the calibre of Villa Park should host more epic matches than it currently does. 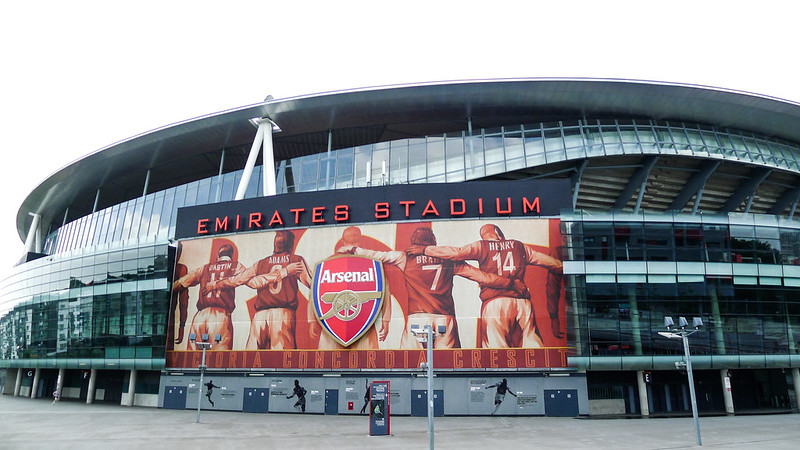 Unlike the classic football Coliseums mentioned above, the Emirates Stadium is representing the new epoch. Completed in 2006, the new home of the Gunners immediately became a pilgrimage site for millions of Arsenal fans from all over the world. Currently, “the Gooners” are still waiting when their favourite team will get the most anticipated titles at their new fantastic arena. In 2018, it’s been announced the facility is going to increase its capacity to 60,600 seats.

Another charismatic old football ground is Craven Cottage. The actual Cottage looked so much different in 1780 when it was used for a number of various sports. Unfortunately, the original Craven Cottage burned down in 1888. Fulham started using the ground in 1896 when it was nothing more than one basic wooden stand and an abandoned field. In 1906, Craven Cottage received its current old-school appearance with present-day Johnny Haynes Stand, a pavilion, and a red-brick facade. Among the other great events, this charming arena has also hosted the 1948 Olympics. Today Fulham is developing plans to raise the stadium’s capacity, which means that the brilliant ground probably won’t be demolished in the nearest future.

There are two big clubs in the city of Liverpool but those playing in red have much more supporters in the football world. Therefore, Anfield is the main ground of the city, and it’s certainly a very beautiful, top quality stadium with a great family spirit. In fact, many people don’t know that from 1884 to 1891 Anfield was actually home for Everton F.C., even earlier than Liverpool F.C. was formed. It was built in 1884 and redeveloped for a number of times in the 19th and 20th centuries. In 2016, it finally increased the Main Stand’s capacity with 8,500 seats. “You’ll Never Walk Alone” at a memorable venue as beautiful as Anfield.

The marvellous riverside location of the City Ground is truly breath-taking. So were the jolliest nights of Nottingham Forest F.C. managed by their most successful coach, Brian Clough. His team had heroically won two in a row European Cup Finals in 1979 and 1980. The glorious events of those European tournaments seem to be distant now but the lovely City Ground will never forget those nights. The club’s fans still support their team and wait when their beloved Nottingham Forest returns to the English and European elite. Hopefully, one day they will hear the Champion’s League anthem at their legendary ground.

Home ground of “the Red Devils” is one of the most recognized and epic sporting venues on Earth. The arena also has one of the most poetical nicknames out there. They call it “the Theatre of Dreams”. The rich history of the club and the arena—which has been home to Manchester United since 1910—makes it interesting to visit the stadium even if you are not a supporter of MUFC. When you hear the wild roar of the crowd around you on a match day, it’s going to become obvious why Old Trafford is one of the most beautiful and atmospheric stadiums in England. 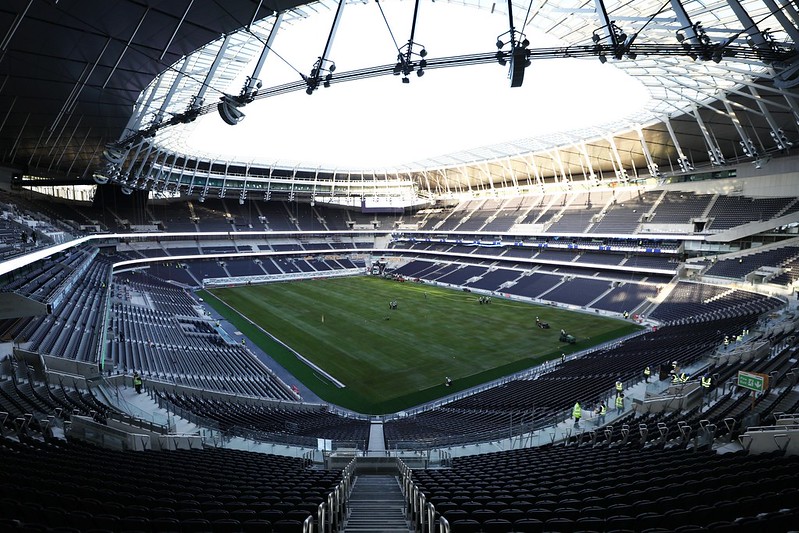 The fantastic Tottenham Hotspur Stadium. Fans will sit closer to the action than anywhere else in the UK thanks to the unique single-tier south stand. The overall beauty of this luxurious stadium is mind-bending. Heated seats, USB chargers, Michelin star dining at lounges, 40-metre high skywalk, the glass-walled Players’ Tunnel–those are only a few of the stunning features that are available to the visitors of Tottenham Hotspur’s new arena. 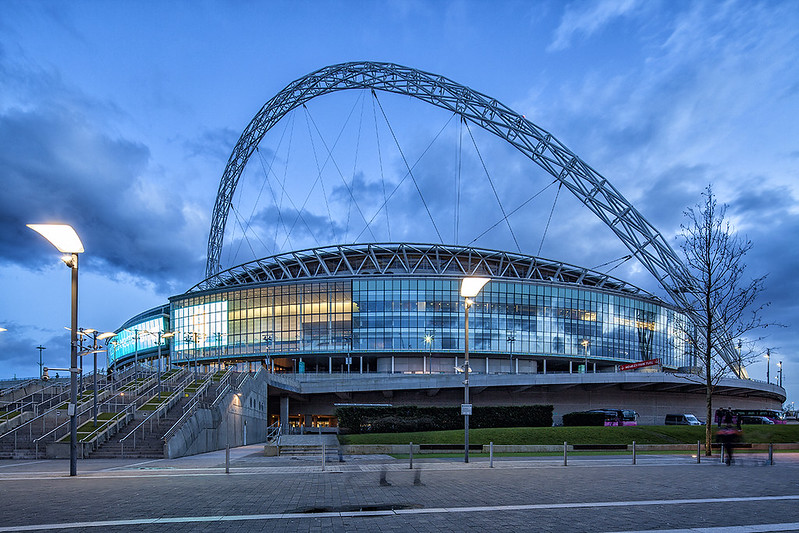 Unsurprisingly, Europe’s second-biggest and one of the world’s biggest stadiums is also one of the most incredible sports venues that anyone can imagine. Wembley Stadium was originally built in 1923, demolished in 2003, rebuilt, and reopened in 2007. A spectacular Wembley Arch is crowning the arena. The colourful lights are making it visible across the British capital. “The Home of Football” hosted a huge number of epic football battles including six European Cup finals and concerts of the world’s most startling musicians, such as Michael Jackson, Queen, Metallica, the Rolling Stones, Madonna, etc. Thus, Wembley became iconic not only for the football fans. It’s a real symbol of our era.